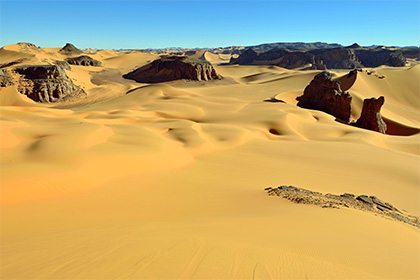 Geologist David Wright (David Wright) from Seoul University found that a person could be one of the main reasons for the emergence of the Sahara desert. This is indicated by archaeological data, according to which people living in the region before desertification began to breed domestic animals.

The scientist analyzed the evidence indicating the time of appearance of pastoralism in the Sahara desert, and compared them with data on the distribution of shrub vegetation characteristic of the forest-steppe. Wright found that about eight thousand years ago, in the areas surrounding the Nile River, the first pastoral tribes emerged, and at the same time, environmental changes began.

According to the researcher, the domestication of animals led to a decrease in the vegetation cover and an increase in the albedo, the amount of sunlight reflected from the surface. In turn, this influenced the local climate, making the rains more rare, which increased the process of desertification.