The remains of a vampire XVI century, first exhibited in the Museum 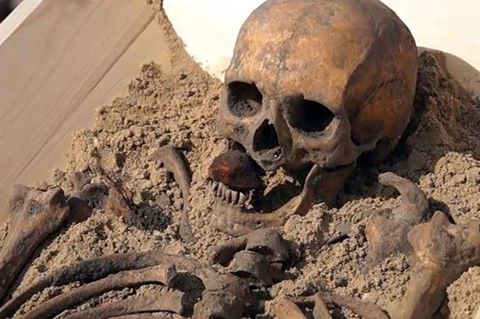 Moreover, according to the scientists, these measures were adopted shortly after the vampire was buried. And just when he was just a skeleton – i.e., after the funeral was more than a year.

Buried craveirinha was probably in the XVI-XVII century in the cemetery which at that time existed near the Church. Since the eighteenth century there was no one buried.

Archaeologists stumbled upon the remains when carried out works in the old market. “According to my theory, damage to the skeleton of the dead could receive from the gravediggers. Who knows, maybe was drunk and they were frightened by the bones? Maybe it was the fact that the skull has an extra suture, which divides frontal bone into two partsand it looked weird?….. The fact remains that the bone was broken so that the vampire could not rise from the grave,” says Professor Karol PIASECKI, anthropologist out at the University of Szczecin.

When remains are not found a stake, which, as you know, was considered the most effective way to kill a vampire. “That’s because when exhumed, they were only the bones without soft tissues. It would be unclear where to drive a stake,” says the anthropologist.

Despite the different versions, archaeologists have spent a lot of time to make the remains presentable. And the Museum of history Kamensky of the earth (Muzeum Historii Ziemi Kamieńskiej) is organizing a special exhibition, where the vampire will be the main exhibit.