The remains of ancient animals were found in the underground cave 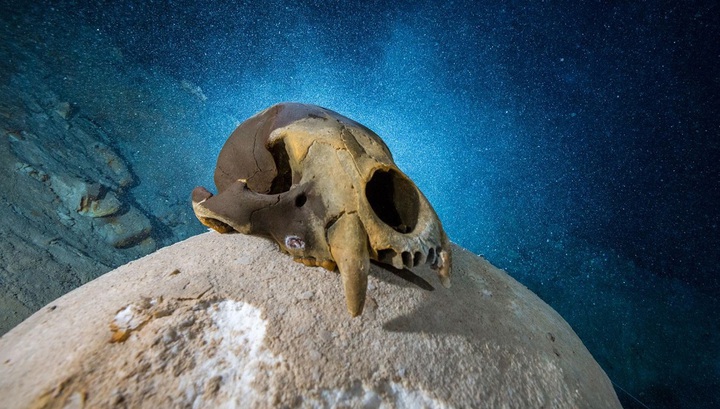 When about three million years ago between the Americas formed the Isthmus of Panama, the south of modern Mexico was in the midst of ecosystem shifts. The so-called land bridge, which connected the continents, contributed to interpenetration and mixing of flora and fauna of the two continents.

It was then that 37 species of mammals (for example, ancient armadillos, porcupines, opossums) left to the north, 47 species (including the ancestors of dogs, horses, bears, raccoons) rushed to the south. This paleozoogeographic event was called the Great Inter-American Exchange.

Even after the main waves of migration, the Isthmus of Panama continued to be part of the permanent routes for ancient animals. The biodiversity of Central America was incredible, and yet the remains of animals in this part of the continent are rarely found by paleontologists. This gap helped fill a team of divers specializing in descents into underground caves.

Thanks to them, the researchers discovered the remains of large animals that inhabited the Yucatan peninsula at the end of the last glacial epoch (about 13 thousand years ago). Team leader Blaine Schubert of the University of East Tennessee presented the results at the annual meeting of the Society of Vertebrate Paleontology, which recently took place in the Canadian city of Calgary.

Studies were conducted in an underground cave called Hoyo Negro (translated from Spanish as a “black hole”). Today, its maximum depth reaches 55 meters, but a millennium ago the sea level was much lower, and prehistoric animals could freely enter the cave along the underground passages. True, there were already a lot of holes in it, it was not possible to get out of them.

Since then, in the cave remained whole skeletons of animals, which simply had nowhere to go. Water with a low oxygen content guaranteed their safety, and as a result, scientists found at least 28 skeletons in perfect or good condition.

“The preservation of fossil material is extraordinary, it will allow us to reconstruct various aspects of anatomy, evolutionary attitudes and behavior.” A diverse fauna reveals an exciting picture of this region in the midst of climatic and ecological changes, “Schubert says.

His work is still far from complete, but even the intermediate results are impressive. Specialists have already investigated the remains of three giant sloths of various species (including completely new ones), short-sighted bears, mountain lions, saber-toothed cats, tapirs, gomphoteric (elephant relatives), and people.

The last find on this list – human bones – is particularly interesting, because it is the oldest and most complete human skeleton (probably female) among those found in North and South America. 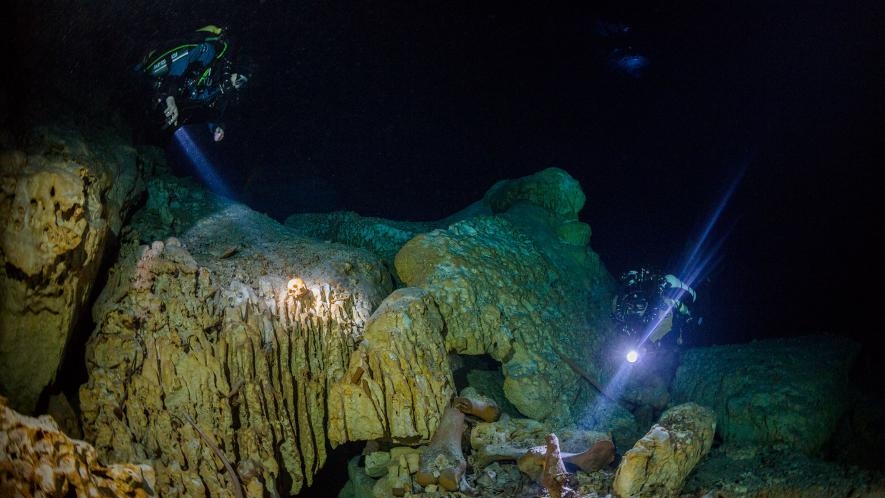 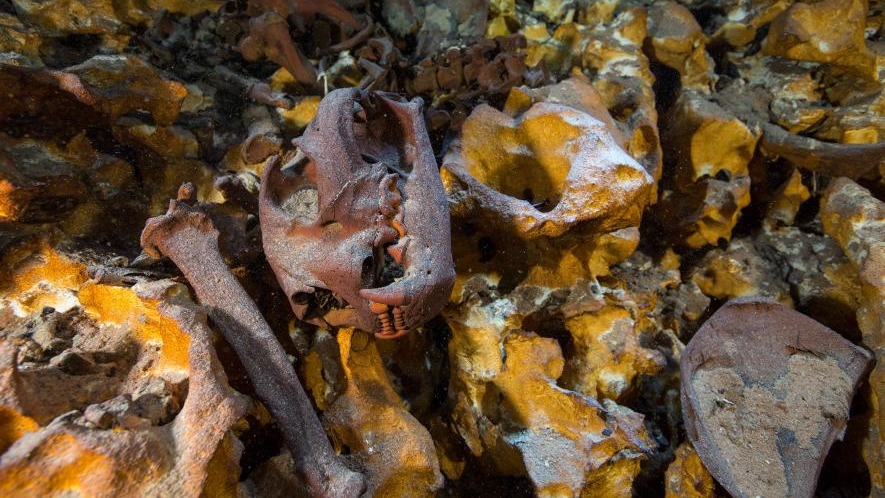 According to Schubert, the remains of the short-beared bear arkoterii are also an important finding: firstly, it is the most complete skeleton of the known, and it will be possible to recreate the appearance of the animal as accurately as possible. Secondly, before this, arkotheria was considered to be inhabited exclusively by South America. This is the first proof of the fact that this genus crossed the isthmus and probably could also live in North America.

By the way, some parts of the underwater cave still store traces of ancient bears, impregnated with a film of calcite, experts add.

Divers discovered three skulls of representatives of the species Arctotherium wingei – these are relatives of modern Andean spectacle bears. And the remains are so well preserved that many visitors of the Schubert laboratory took them for the reconstruction of the highest quality.

Another curious find is the skull of a coyote-like animal from the family of dogs. Previously, the remains of such animals were found only in South America.

In the light of the new data, the Great Inter-American Exchange now appears to be an even more complex phenomenon than previously thought, experts say.

The authors of the study note that the Panama Isthmus and nearby territories are most often considered only as a land bridge, undeservedly forgetting about the huge biodiversity of the region. Schubert’s team plans to continue working in this area and to find even more remains of ancient creatures.