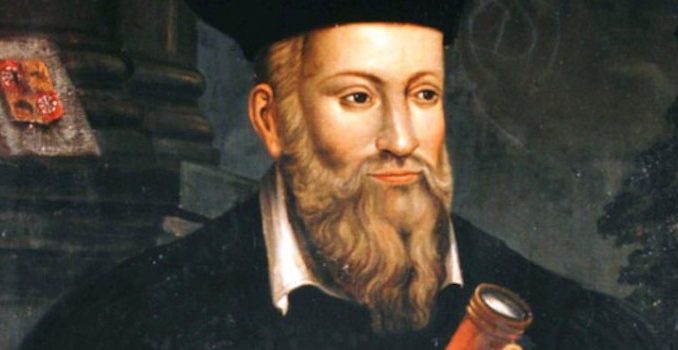 Almost 500 years people of different countries are interested in the encrypted prophecies of Michel Nostradamus. The books of different authors about the deciphering of quatrains are published, but you will not find two identical decipherings of all quatrains among them.

This conclusion once surprised me, as one of the co-authors, and Grozov Victor Georgievich, the author of future books on this topic. In the beginning, there were questions: who is to blame ?, what to do ?, where to start? Naturally, with a thorough study of the French language, the answer arose.

The conclusion is the first.

To accurately translate quatrains from Old French to modern Russian, you do not need to learn French.

After reading these last lines, read on does not make sense, the reader will think. But, imagine how many times and with what care the quatrains have already been translated into Russian. And do I need to waste my time and years of life again?

For decryption of quatrains, clearly, somewhere there should be ciphers, keys, some kind of scheme or an auxiliary table for placing all quatrains in their original state in view of their willful, not consistent location in the centuries, judging by the events described in them.

Through prolonged inferences and mathematical calculations, Victor Georgievich Grozov first discovered an encrypted table of quatrains encoded in quatrains for any centuria of the prophecies of M. Nostradamus. (See the table below). The table presented in this article was discovered in July 1999. Quatrain No. 72, Centuries 10 in this case, as an occasion for reflection and personal opinion. Who deals with decryption of quatrains one at a time, considering each quatrain as a separate event (against obvious evidence), the table is not needed, because quatrains can be “decoded successfully” by centuries, binding them to different historical events.

The table contributed to the decipherment of all quatrains from 10.07.1999 to 20.05.2004 by the titanic work of Grozov VG. and help from co-authors. The following were involved: the Bible, the Koran, the Vedic predictions of India, the history of Europe, Asia, Africa and America. Astronomy, Astrology, Mathematics and Physics. Prophecies of the prophets: Zarathustra, Daniel, Jesus Christ, John the Divine, Mohammed, Omar Khayyam and Nostradamus. Translations of the prophecies of other prophets from foreign languages.

And Nostradamus created quatrains-prophecies after studying the prophecies of past prophets. Prophets from century to century transmit their encrypted knowledge to each other with each time they clarify. In life, their teachings were not accepted by many. Their life was short and often under the threat of death. It was. Unfortunately, it will be so. In 2381, a new prophet, a follower of Jesus Christ, will be born. To him will be a pilgrimage of believers from different countries. After 9 years of imprisonment in an underground prison, in April 2430 his death will come. Century № 2, quatrains № 27,8,74 and 75. Century № 3, quatrain № 38 and others.

1. The events described in different quatrains-the parts of one event, are deliberately placed chaotically in the centurions, but the serial numbers of all quatrains increase, which makes it possible to apply the table. Selecting the number of quatrains on the horizontal line, in the table we get the chronological, semantic series (group) of quatrains for deciphering and describing the predicted events including up to 20 quatrains. 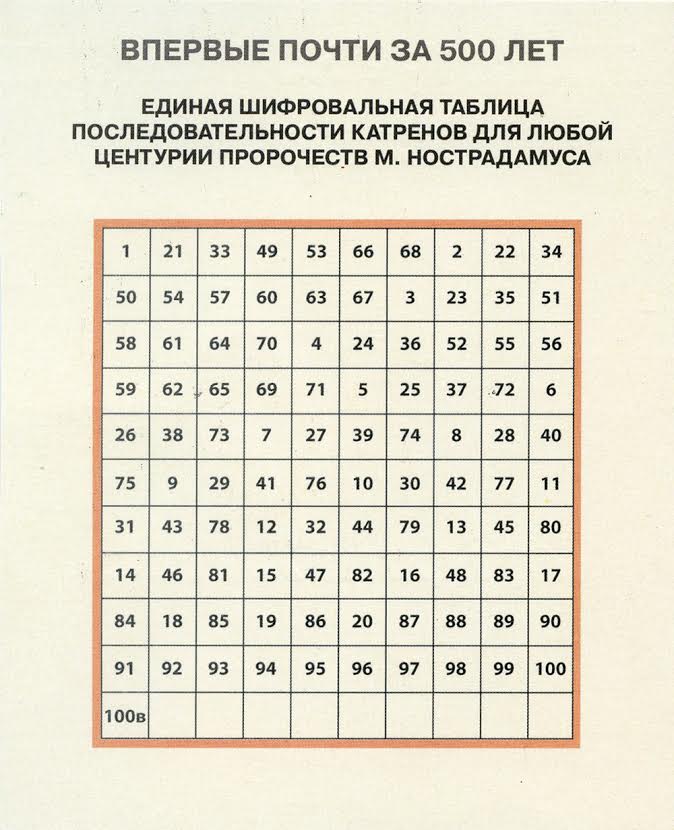 For an example of already deciphered quatrains, several sequences of events in quatrains according to the table:

The sequence of quatrains according to the table is confirmed by the events described in more than 20 articles, on the Internet.

2. Using the table, it became possible to determine the time of the predicted events in years, often in months, sometimes in the numbers of the month, according to the first quatrain, in the group of quatrains. The subsequent quatrains in the groups describe the place and course of the event, the special signs of past and future historical figures, their violent or natural death.

The beginning and the end of peaceful or military periods of life in different countries and much more for 9 thousand years. Of these, 1240 years before the Ice Age (Glacial Flood) of the past civilization, 7021 years of real civilization, and 800 years of a new life following our civilization on the planet Earth, after another Great Flood. For 9 thousand years previously uncoded clear time cycles of recurring events, so necessary in our time for long-term forecasting and prospects for self-preservation, were discovered.

The upcoming Mixed Flood is the most complex, insidious and tragic in comparison with the previous World Floods – Water and Glacial. The complex of long-standing contraptic underground structures, according to the Bible-Ark, in which Noah saved with his family and every creature in the couple was built according to the Bible for 600 years. This complex people of the past civilization built with a great delay, that is, in 3197, if it was built in comparison with our civilization. 3797 600 = 3197. Where 3797 is the beginning of the flood.

The construction of Noah’s Ark was started later than the present time for 1179 years (3197-2018). Now it’s clear why Noah alone survived with his family and every creature in a couple. The rest of the people did not manage to build the Ark for a massive rescue of people in 600 years. There were good reasons. Minerals at that time were already running out. On the surface of the earth, the pre-emptive element most often began to rage: hurricane winds, earthquakes, heavy rains, large hail, floods, a sharp change in temperature from heat to cold beyond 80 degrees Celsius, various curable and incurable diseases.

The prophets sacrificed their lives to bring this truth to the people of the 21st century, to inform that if we start building the Kovchev in the early 21st century, then everyone will have the possibility of salvation. About this Nostradamus has more than 60 quatrains based on the experience of saving people of past civilizations, described in ancient books, which he burned, betrayed, as he wrote, “Vulcan” because of the threat to him by death.