The search for Sannikov’s Land: how it was 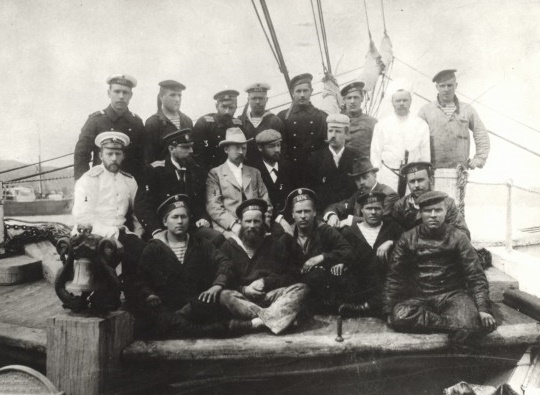 The legendary Sannikov Land was searched for almost two centuries by the best Russian navigators and polar explorers. But the ghost island remained undiscovered, giving rise nevertheless to a large number of scientific hypotheses and riddles.

Maybe this whole “race” for the Sannikov Land would not have arisen, if it had not been for the Yakut hunters, who at the beginning of the 18th century realized that the Arctic fox was no longer in the same quantities as before, and therefore a different source of income is needed. This new industry was the search for mammoth tusks or mammoth bones. In search of valuable ornamental material hunters began to go farther north, and saw the islands that they could reach on the ice. Subsequently, these islands were called Novosibirsk. In 1770 the merchant Lyakhov manages to correct the license for the extraction of mammoth tusks first, therefore the two nearest islands to the mainland, Catherine II, command to be named after the merchant – Bolshoy Lyakhovsky and Maly Lyakhovsky. After the death of Liakhov, in 1806 the right to conduct fishing passes to his colleague – merchant Syrovatsky, who sends to the archipelago a team of Yakut industrialists, headed by Matvey Gedenstrom. The goal is to find the mammoth tusks.

The mammoth bone was indeed found. However, this did not glorify the Novosibirsk archipelago and its first researchers. The team of the first Russian expedition included the same Yakov Sannikov, who saw the “high stone mountains” rising above the sea. His opinion that there are “vast lands” north of the island of Kotelnyi did not question, and this is not surprising. Experienced polar traveler, who opened earlier three of the Novosibirsk islands – Stolbova, Faddeevsky and Earth Bunge – could hardly be wrong. Gedenstrom applies the “Lands seen by Sannikov” to the map and records “… to the north-west, at an approximate distance of 70 versts, high stone mountains are visible.” In favor of the existence of lands, scientists who watched birds also spoke. For example, polar geese flew to the north, from where they returned with the young. Could not they nest and grow offspring in the ice? Maybe the temporary home for them was just the relatively warm Sannikov Land?

To refute or confirm the existence of Sannikov Land was not so simple. Swim to the islands could only two or three months a year, and even if the end of summer and autumn will be warm. Otherwise – even in the summer the ocean is frozen by ice. Researchers of the XIX century preferred dog sledding. One of such attempts was made by Sannikov himself. And in the 20 years of the XIX century Peter Fyodorovich Anjou went to the search of the Earth, who came to the point from which Sannikov saw his Earth. But, despite the clear horizon, in the north-west Anjou did not see anything, except for a smooth icy surface, while, unlike Sannikov, he had excellent optics. Within two days the expedition moved in the indicated direction, however “the prospective land was not visible”. Taken samples of bottom soil and 34-meter depth of the sea showed that there is no sushi in sight. Verdict Anjou – Sannikov saw a “fog, similar to the ground.”

After the statement of Anjou about the Land of Sannikov, it seems, they forget. But in 60 years a new impetus to the search is given by the discovery by the American explorer George De Long of the archipelago of the small islands located far to the north of the island of New Siberia, and the article by the scientist of the Russian Geographical Society, Mr. Grigoriev, who makes the assumption that the islands of De Long are “The same” land. By the way, it is Grigoriev who first uses the word combination “Sannikov Land” in print. A few years later, in 1885, the Academy of Sciences decided to organize, in fact, the first scientific research expedition to study the Novosibirsk Islands. Its leader is Alexander Bunge, and his assistant is Baron Edward Tolle.

The expedition of 1885 radically changes the life of Toll – he will again and again try to reach the Land of Sannikov. And how else, if on August 13, 1886, he saw with his own eyes “the clear contours of the four table mountains, which in the east joined with the lowland”! Clear weather allowed Tollyu not only to visually determine the distance to the mountains – about 150 versts, but also talk about their structure, similar to the islands of Franz Josef Land. In 1893, he again goes to the archipelago – the Academy instructs him to investigate the discovered mammoth corpse in the vicinity of the Yana River. The item “Study of unknown parts of Siberia” gives Tall a relative freedom of action: before deciding to study the remains of the animal, he decides to visit the Novosibirsk Islands once more and again sees on the horizon a strip of mountains that Sannikov identifies with the Earth. Tolle is almost certain that in the region that attracted him, the continent once existed and, like a true researcher, he suffers from endless questions, the main one of which is a mystery: how and why did this continent, if it was, fall apart? In the years that followed, Baron Toll would submit his conviction to the facts: Anjou did not see the land, but the industrialists did not doubt its existence, and those who did not find it could have walked north or were disturbed by thick fog. Toll’s ideas found a warm response from the leading people of the time-Mendeleev, Schmidt, Karpinsky, and Makarov.

Catch up and overtake!

At the turn of the century, it becomes known about the plans of Canadians, who decide to send to the Arctic polar expedition under the leadership of Bernier. The Russian polar expedition was decided to organize immediately, with a wide scope and wide coverage in the press. Especially for the expedition was bought a Norwegian whaling vessel, called “Dawn”. From talented, young and promising specialists, Toll personally formed a team, the best equipment and equipment was procured. Zarya left Petersburg on June 21 (old style) in 1890. Tolle, accompanied by Friedrich Seegberg, Vasily Gorokhov and Nikolai Dyakonov, go to Bennett Island, where “Dawn” was due to arrive in two months. However, due to serious damage and severe ice conditions, Zarya was unable to approach the island at the appointed time. Without waiting for “Dawn”, Toll’s group decides to make its way towards the continent … In 1903 the expedition headed by Alexander Kolchak reveals the place of Toll’s camp on Bennett, the diaries and the most valuable research materials. Tolle and his colleagues were not found. A detailed description of the journey is presented in the diary of the Baron, published first in Berlin in 1909, and then in abbreviated form, in 1959, and in our country.

There is only a moment…

The point was set by researchers of the last century. First in 1937 the team of the Soviet icebreaker “Sadko” went around the proposed Earth from all sides – south, north, east. In addition to ice, nothing was found. At the request of Academician Vladimir Obruchev, who is known to the general public as the author of the fantastic novel “The Land of Sannikov,” airplanes of Arctic aviation are sent to the region. Titanic efforts to find the Earth give the result. Negative! There is no Sannikov Land! A number of scientists come to the conclusion that, like most of the Novosibirsk islands, which eventually disappeared (Vasilievsky, Semenovsky, Mercury, Diomida), the mysterious island was a permafrost with a relatively small layer of soil. The land of Sannikov simply … melted.