The secret Book of Kells 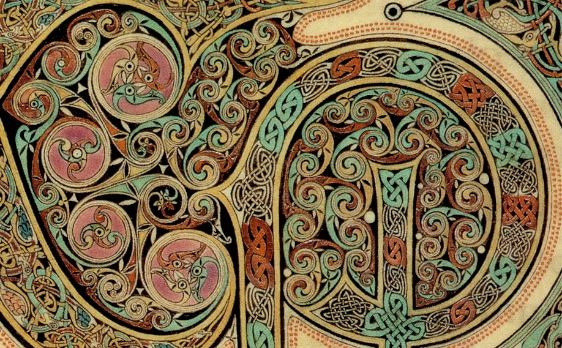 The book of Kells is a richly illustrated manuscript created by Irish monks in the year 800. This is one of the most lavishly decorated with exquisite miniatures and ornaments of medieval manuscripts extant. Due to magnificent technique of work and beauty of pictures, many researches view it as the most significant work of Irish medieval art.

The book contains the four Gospels in Latin, introduction and interpretation, decorated with a huge number of color patterns and miniatures. Currently the book is in the library of Trinity College in Dublin, Ireland.

According to the basic version of its origin, the book was created in the scriptorium of the monastery of St. Columba on Iona in the late eighth or early ninth century. After the monastery was destroyed by the Normans, the book was moved by the monks who fled to Ireland, to the Abbey of Kells, where the book got its name.

The text is accompanied by incredibly complex technique of creating drawings in full page and in the text often there are a small artistic decoration. The book uses a wide palette of colors, most often purple, lilac, red, pink, green, yellow.

All the decorations in the book are made with the highest craftsmanship. The complexity of their design often takes the breath away. In one pattern, which is a square inch of a page can be counted 158 complex intersections of a white ribbon with a dark border. Some patterns can be discerned only with a magnifying glass, although at the time of this writing they have not yet existed. The patterns and designs that can be seen in this book have many Parallels with the jewelry and stone carvings remaining from that period. The design of these patterns is often used today in jewelry and tattoos.

A special technique of the look and… the stereo effect. 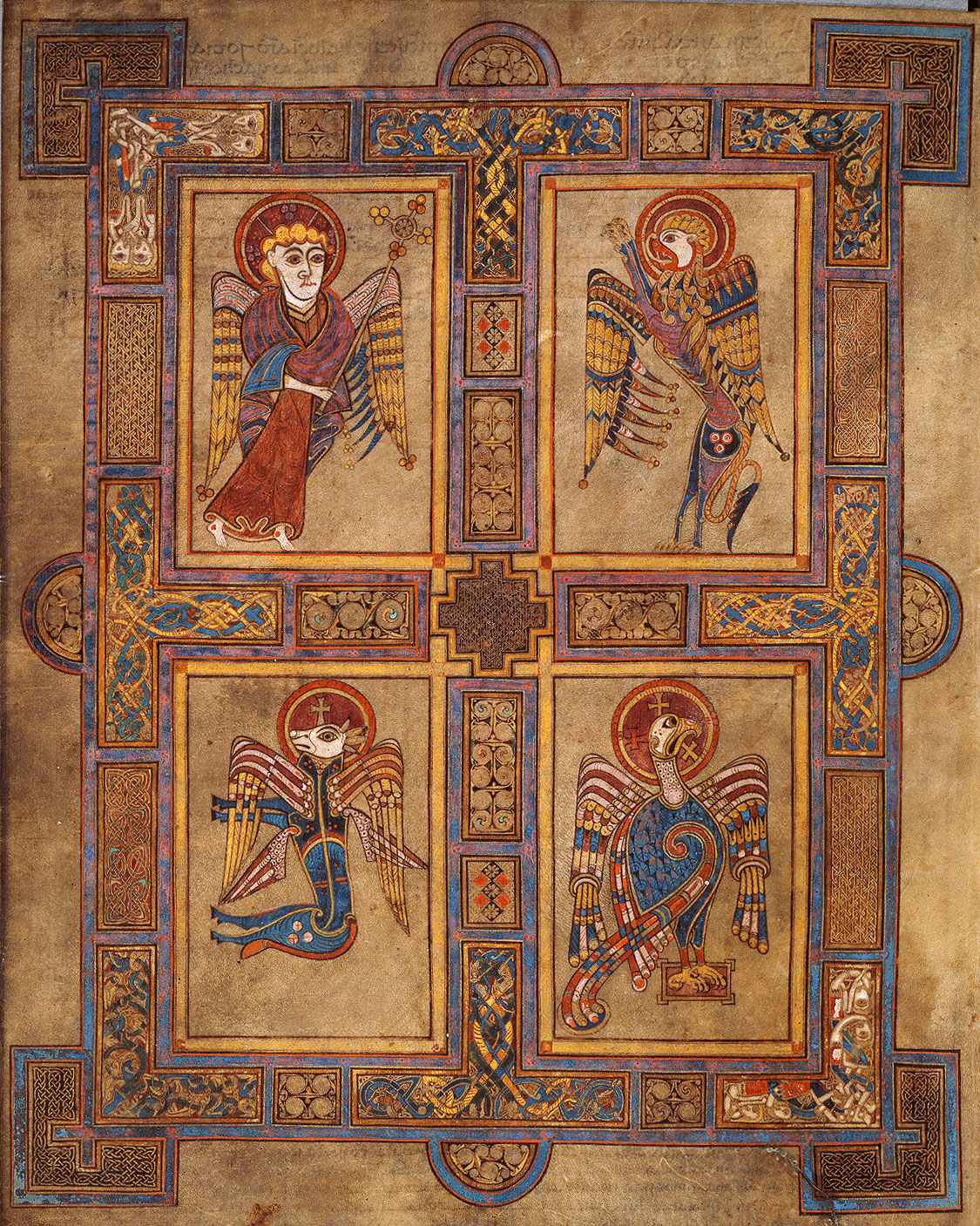 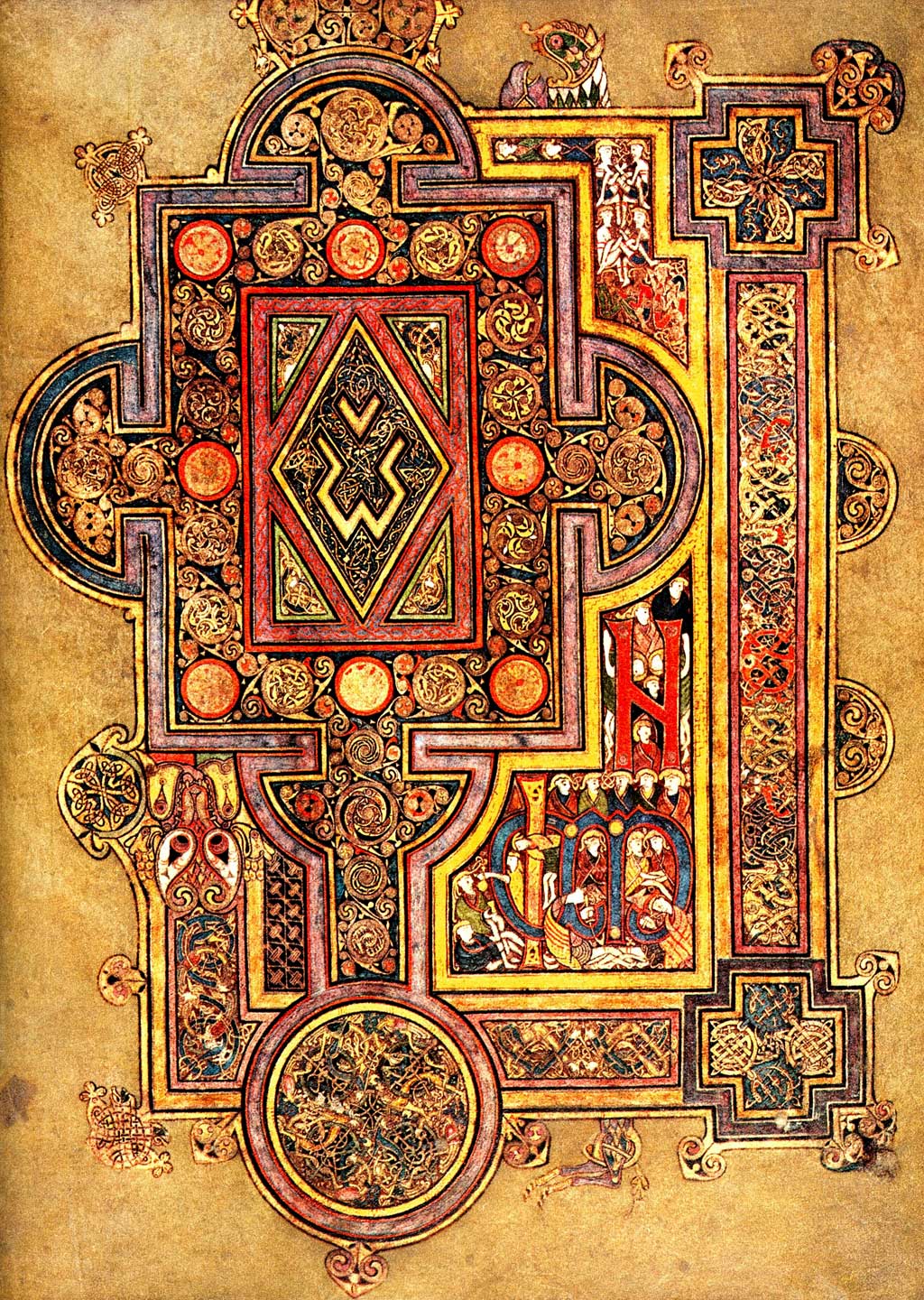 Medieval illuminated gospel written by the Celts, so distinguished by the filigree technique, in a little later time about these manuscripts say: “This is not the work of man, but of angels.” The answer to the mystery mastery of the ancient monks found Professor John Cisne (John Cisne) from Cornell University (Cornell University).

He looked at some of the most outstanding manuscripts, created between 670 and 800 years BC. These masterpieces are distinguished by the presence of a certain number of “kovarnyh” pages — busy patterns, as well as a large number of illustrations in the text.

In particular, Cisne analyzed the famous book of Kells (Book of Kells) created by Irish monks around the year 800, one of the most richly decorated with illustrations of manuscripts for the entire period from late VI to early IX centuries, the true pinnacle of excellence in the drawing of the miniatures and ornaments. Also, the Professor used in his study of the Book of durrow (Book of Durrow), as bright manuscript, which appeared in the VII century.

Many elements of the images on their pages is made with a resolution of 30 lines per centimeter and one square inch another illustration can sometimes have over a hundred complex intersections “ribbons” of different colors. High precision patterns and thickness of parts is less than one millimeter is one of the things that led modern scientists to marvel at the tomes to wrestle with the technology of their production.

Professor (main field of activity is — paleontology) drew attention to the fact that in many of the illustrations meet regularly repeating patterns and in small elements, like copied from the template. In addition, it was found that the most complex patterns are present on the page in several places, separated by a distance corresponding to the average distance between the pupils of a person. This led researchers to the idea that in a filigree performance figures the key role played by the vision of the creators of the books, or rather is a special technique of the look and… the stereo effect.

Sicne put forward this explanation of secret drawings. The monks probably created a number of intricate patterns for certain “standard” elements of the picture. They had next to the new sheet and made a sight so that each eye saw only the pattern or a reproducible piece of the pattern. Due to the stereo effect it created the illusion of three-dimensional images in which any error in the drawing of the line (shift sideways) resulted in differences in the apparent height in this part of the picture.

Moreover, the ability of our brain to interpret the shift in the two images as depth allowed would like to increase any roughness in the image to 30 times, calculated by the British scientist. Minimizing the apparent peaks and dips in volume lines, the ancient masters could meet in the submillimeter range accuracy of reproduction of the template. And all it needed was a firm hand and some training in an unusual use of the eyes.

This method scientist called “free stereoseven” (free-fusion stereocomparison). He believes the Professor, and allowed Celtic monks to create such a duplicate filigree ornaments long before the invention of lenses and microscopes. “Most people don’t know how accurate the tool our eyes, and do not think that you can use them slightly different than the obvious way,” added Sine.

And the fact that the secret of drawing is so graceful and precise ornaments were carefully buried, John explains logical: this part of the propaganda war of the Celtic Church against the Roman. Established reputation of such books as are written by angels, it could attract followers.