The secret of the “black sarcophagus” 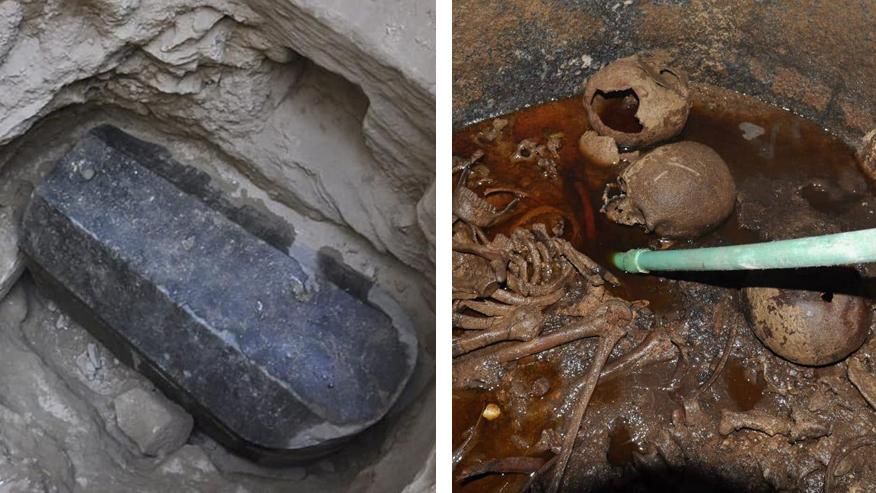 In July, researchers found a sealed giant sarcophagus of black granite over two thousand years old at a depth of five meters. After the autopsy in an untouched marauder sarcophagus, three mummies were found buried around the 4th-3rd century BC. The remains were damaged by water.
The Egyptian Ministry of Antiquities reported that the scientists have established the sex and the approximate age of those buried in the sarcophagus. These are two men (the first: 35-39 years, height 160-165.5 centimeters and the second: 40-44 years old, large body, its height was 179-184.5 centimeters) and one woman (20-25 years old, growth from 160 to 164 centimeters).
“Preliminary studies by a group of scientists led by Zeynab Hashish allowed to establish the sex and age of the buried at the time of death, their growth in accordance with measurements of skulls, pelvis, bones in the anthropological study,” said Mustafa al-Waziri, head of the council on antiquities.
He noted that the burials were most likely made in two stages. Scientists came to this conclusion by studying the location of the remains in the sarcophagus.
The researchers also established a possible cause for the appearance of a hole in one of the skulls. According to them, it could appear as a result of a surgical operation for trepanation of the skull, since “the deceased lived with this wound for a long time”.
Scientists will continue to study the remains of the sarcophagus by conducting DNA examinations. Researchers expect that this will help establish the degree of kinship of the buried. They also plan to analyze the liquid evacuated from the sarcophagus.
Ancient cemetery
Specialist in the field of restoration of archaeological monuments of Cairo University Mohammed Abdel Hadi urged to continue excavations in the area of ​​the discovery of a black sarcophagus. According to the scientist, there may be other burials.
The specialist noted that perhaps it is an ancient cemetery where large sarcophagi can be buried.
Abdel Hadi stressed that in this case there is a high probability of discovering the burials of politicians, representatives of local authorities and military.
Only a small part is open
The well-known archaeologist and former minister of antiquities of Egypt Zahi Hawas, in turn, believes that to date, found only about 30 percent of the monuments of the ancient period.
According to him, all the latest finds in Alexandria were made by accident. He also expressed the opinion that there is a probability of finding in these areas the grave of Alexander the Great.

At the same time, the archaeologist complained about the imperfection of the Egyptian legislation.
“Now often, when a citizen, for example, finds out an archaeological site during the construction of a house, he prefers not to report it, to destroy or bury him, because he is afraid that he will be taken away from the land … The law on the protection of cultural heritage must be improved and ensure that the person, who discovered an artifact or some archaeological site, will receive a payment in the amount of the cost of the find.This will be a good way to prevent, among other things, the illegal sale of valuables abroad, “he added.