The secret of the dungeons of Jihlava in the Czech Republic 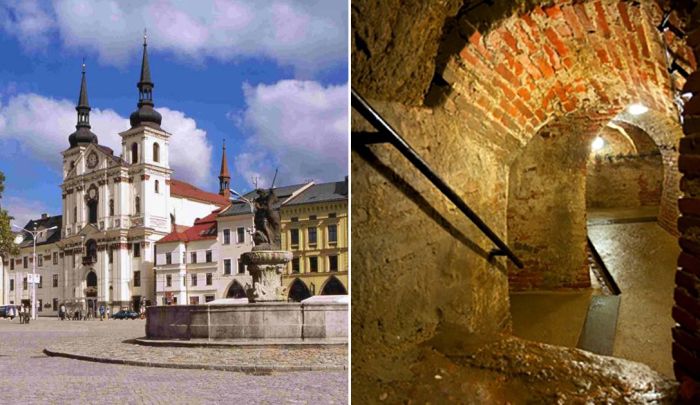 In the south-east of the Czech Republic there is a beautiful town of Jihlava. It is literally packed with sights – there are beautiful churches and the famous Town Hall, and the Gate of the Mother of God. But the most interesting among tourists is a mysterious place filled with a huge number of rumors and legends. These are catacombs, dug many centuries ago, which pass through the whole city. Many of the visitors argue that in the dungeon there are incomprehensible phenomena.

The mysterious history of the catacombs

In the 1270s, silver ore was discovered in this part of the Czech Republic, silver miners were immediately attracted to it and, by the order of King Otakar II, they built a city near the mines. Very soon it became one of the largest and richest cities in the Czech Republic with a developed handicraft and trade business. After a couple of hundred years, the deposits of silver were exhausted and the “silver fever” in the city came to naught. It is known that by the XVIII-XIX centuries Jihlava was inhabited by Germans, but after a while they were replaced by Czechs again.

When exactly the first catacombs appeared under the city, it is not exactly established. According to the latest version of the scientists, they were dug at the turn of the 13th-14th centuries. Most likely, a rich and prosperous city needed large warehouses for food storage. According to historians, in the catacombs, locals hid barrels of beer and wine, fruit and vegetables were stored here, and some rooms even represented workshops in which artisans worked.

Underground corridors, dug at 12-meter depth, stretched for 25 kilometers and pass through the whole city. During World War II, the locals used the catacombs as a bomb shelter, although the Germans occupied the city and tried to close most of them for their own safety, because they too have mastered these tunnels.

Since the second half of the last century, the landmark “Jihlava Dungeon” has become available for tourists. Visitors can explore several kilometers of underground corridors, which were previously reinforced with concrete for reliability and prevention of erosion.

Every half an hour from the main entrance to the catacomb, located in the courtyard of the church of St. Ignatius, excursion groups leave. For more mystery, the employees of the “underground museum” at some point turn off visitors to the light. Fortunately, only for a while. Add mystery and moving lights. For several decades now, the most incredible rumors about the Jihlava catacombs have been heard. They are passed on from mouth to mouth.

The legend of ghosts

Since during the construction and subsequent expansion of the catacombs several centuries ago under the debris people periodically died, still among the local population there are rumors of ghosts wandering the underground labyrinth. Some say they are the souls of the dead, others say they are terrible vampires. And although there is not a single person who actually saw these ghosts, especially impressionable natures still believe in them.

The Legend of the Young Organist

Some visitors to the catacombs say that they clearly heard the sounds of the organ in the tunnels. The oils were also added to the fire by the testimony of archaeologists who worked in the catacombs in the 1990s. Then the whole expedition stated that they had heard organ music in one of the underground corridors. Since the mass insanity experts who studied their testimony, ruled out immediately, and take the body at 10-meter depth was nowhere, no one understood what exactly heard the archaeologists.

But the townspeople immediately found an explanation for these sounds. After all, according to one of the city’s legends, five centuries ago a young man lived in the city, who was amazingly beautiful and masterly played on the organ. He published so unearthly sounds on this instrument that the Inquisitors considered his talent a “gift” of evil spirit. The musician was buried alive in one of the underground corridors, and now the spirit of the deceased allegedly continues to make the organ sounds, wandering through the labyrinths.

The legend of the strange radiance

The most mysterious landmark of the Jihlava dungeons is the luminous corridor. For the first time this phenomenon in the catacombs was discovered by amateur speleologists in 1990. This short section of the path emits a greenish light even when the electricity is turned off.

For a long time, the cause of this glow was the mystical forces, but later the analysis of the floor and wall coverage showed that it contained phosphorescent substances. Another corridor – which, according to rumors, glows even brighter than the first, is found under the building of the city library, but tourists are not allowed to enter this place yet. It was in this room, according to some sources, during the war that the Nazis arranged barracks for soldiers. Lights in the catacombs and one of the stairs, but the cause of its radiance has not yet been established. By the way, the shade of its glow is not greenish, but red-orange.

One of the legends says that in this place during the Second World War, some scientific experiments were conducted by Nazi researchers. A chemical analysis of the coverage of one of the glowing corridors, conducted by Czech specialists, showed the presence in its coating of a mixture of barite and wurtzite (a phosphor that accumulates energy and gives a glow). And since part of the premises in the war were occupied by German anti-aircraft forces, the fascists could well use it as a highlight or really experiment with applying some luminous information signs.