The secrets of mount Kailash 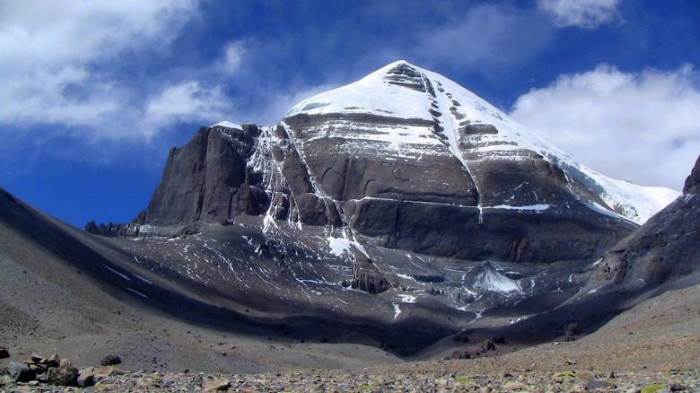 “Better than mountains can be only mountains, which have not yet been”, – sang Vladimir Vysotsky. In this case, the Tibetan mount Kailash – the best of the mountains, because on top of still not been raised none of the mortals. She does not admit to itself any of the brave men who dared to attempt the ascent.

This mountain in the form of four-sided pyramid with snow cap and edges oriented almost exactly to the cardinal, is sacred to followers of four religions. Hindus, Buddhists, Jains and Bon followers believe it is the heart of the world and the axis of the Earth.

The Tibetans are convinced that Kailash is like the polar mount Meru from the Indo-Aryan myths unites the three cosmic zones: heaven, earth and the underworld and, therefore, has universal significance. In the sacred Hindu text “Kailash Samhita says that on top of the mountain “God dwells the terrible and the gracious – Siva, combining all the forces of the universe, the progenitor of life of all the living creatures and exterminate them.” Buddhists believe Kailash the abode of Buddha. Because the sacred texts say: “No mortal dares to climb the mountain, where the gods live, the one who will see the faces of the gods must die.”

However, the two, according to legend, still went to the top: Tonpa Shenrab, founder of Bon religion, it is here that descended from heaven to earth, and the great Tibetan teacher, yogi and poet Milarepa who have risen to the top of the mountain, catching the first morning sun beam.

However, this is a legendary personality. But for ordinary mortals the mountain remains unclimbed, despite its not very high altitude compared to Himalayan eight-thousanders “only” about 6,700 meters (in different data sources differ). Tell that to the brave, dare to climb, as if the air rises insurmountable wall: kaylas like push them away, and then all resets to the foot.

There are stories about the four climbers (whether the Americans, whether the British), who pretended to be pilgrims performing the Kora – a sacred mountain around. At some point they went with the ritual path and went up. After some time, the pilgrims camp at the foot of the mountain came down four dirty, ragged and absolutely insane people with crazy eyes. They were sent to a psychiatric hospital, where climbers aged incredibly quickly and in less than a year, died deep elders, never regaining consciousness.

It is also known that in 1985, the famous mountaineer Reinhold Messner has received from the Chinese authorities permission to climb Kailash, but then was forced to abandon this idea for reasons not fully understood. Some say that the rapidly deteriorating weather conditions prevented, others that the guy who conquered all 14 eight-thousanders of the world, before the assault on the mountain was some kind of vision…

But a Spanish expedition in 2000, acquired for a considerable sum permit (the permit) to the conquest of the mountain from the Chinese authorities, faced with the very real obstacle. The Spaniards had already established a base camp at the foot, but then the way became blocked by a crowd of thousands of pilgrims, who decided at any cost not to allow this to happen to sacrilege. Their protest was expressed by the Dalai Lama, the United Nations and a number of other major international organizations. Under this onslaught, the Spaniards were forced to retreat.

But Russian and here, as always, ahead of the rest. In September 2004, the member-correspondent of the Russian Academy of natural Sciences Yuri Zakharov has managed to lull the Tibetan community. Together with his son Paul, he was able (without permission) to climb the Kailash of the South-Eastern side to the level of 6200 meters. But the top still did not submit. Here’s how to explain it myself Zakharov:

– On ascent night I was awakened by Paul, saying that the sky awesome beauty of unusual light phenomena of natural electricity. To get out of the tent absolutely did not want, and had no strength, but his curiosity took – indeed, every 3-5 seconds in the sky flashed spherical, bright flash, similar to the depicted in Tibetan iconography the crucible – glow-iridescent sphere. The size of a soccer ball.

It is appropriate to recall an even more interesting phenomenon that is more difficult to explain from a scientific point of view, the day had only to close and open my eyes, looking up at the sky and were clearly visible as if glowing stripes that comprise a huge mesh covering all around and consisting of hundreds of swastikas. Here’s a mystic, he would not have seen nor would have believed. In General, this is the only unusual phenomenon that occurred with us at the mountain, not counting the sudden changes in the weather at the time of ascension.

The higher up the expedition, the worse the weather: snow, sharp gusts of cold wind, knocking down. In the end had to retreat.

Mysteries of the mountains

The light flashes over the top of the mountain observed from ancient times. Hindus sometimes see there many-armed creature, they identified with Shiva.

Satellite imagery shows that the Kailas is the center of the stone spiral. Mountain drive is a kind of planetary and cosmic energy, the largest on Earth. This also contributes to the pyramidal shape of the mountain. By the way, the Russian scientist and esoteric, Professor Ernst Muldashev believes that this pyramid is of artificial origin, as well as other pyramidal mountains in the region, and built them in ancient times, a certain supercivilization.

Version curious, but hardly true. Pyramidal shape have many mountains and on the Tibetan plateau, and the Himalayas, including the highest peak on Earth – mount Everest (mount Everest). And they were formed in a natural way that can easily prove any expert having knowledge in Geology.

The icy dome of the top of the mountain is like a huge crystal, shining in the center of the flower Bud petal-shaped, formed fancy curved smooth rocks blue-violet color. Ernst Muldashev and other researchers claim it is the mirror of time, such as those that were created by the Russian scientist Nikolai Kozyrev, only, of course, much larger. For example, mirror “House of happy stone” – 800 meters high.

The system of these mirrors changes over time: it is usually accelerated, but sometimes slows down. It is noticed that the pilgrims performing the Kora – the bypass around the mountain – a length of 53 kilometers per day to have time to grow a beard and fingernails so bystrytsya all life processes.

A lot of controversy is a vertical cleft running down the centre of the southern side of the mountain. In certain light, at sunset time, fancy a game of shadows forming a semblance of the swastika – an ancient solar sign. Esoterics believe it is a sacred symbol that prove the artificial origin of the mountain. But, most likely, the swastika – just one of the vagaries of nature.

According to some researchers, the pyramid of Kailas – hollow. Inside it’s a whole system of rooms, one of which houses the legendary black stone of Chintamani. This messenger from the star system of Orion keeps the vibration of distant worlds, working for the benefit of people, contributing to their spiritual development. And Muldashev generally believed that inside the mountain is in the state of Samadhi are ancestors, preserving the gene pool of humanity since the time of Atlantis.

Others argue that the great initiates of all times and peoples -Jesus Christ, Buddha, Krishna and others are in Samadhi inside the sarcophagus Nanda, situated right next to the mountain and connected to it by tunnel. They Wake up during the most serious disasters and come to the aid of people.

Another mystery mountain – two lakes: the one with “alive”, another with “dead” water. They are near the mountains and are separated only by a narrow isthmus. In the Manasarovar lake water is crystal clear and delicious, has a therapeutic effect, invigorates and clarifies the mind. The water of this lake always remain calm, even in strong winds. And lang-TSO still called the lake demon. The water is salty, undrinkable, and there is always a storm, even in calm weather.

Many miracles and riddles fraught with sacred mountain. About all will not tell in a short article. It is better to see with your own eyes, come to the Kailas mountain and have to make a crust. After all, even a single bypass around the mountain will save you from all life’s sins. The pilgrims, who made 108 rounds, can reach Nirvana in this life. Of course, it will take 2-3 years at least. But it’s worth it, isn’t it?!