The secrets of the origin of Tibetans 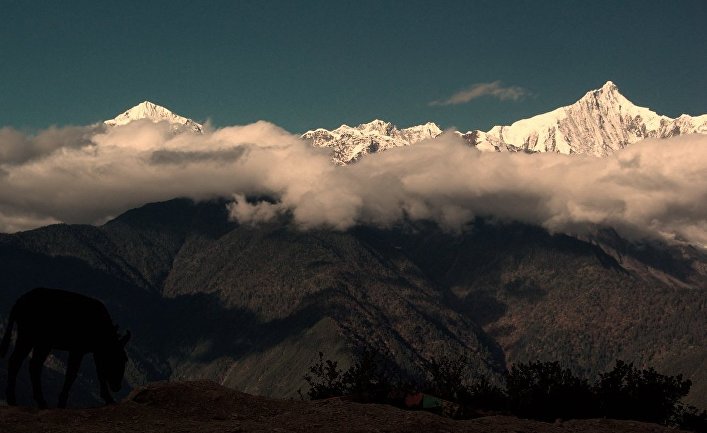 The first people who decided to get to the Tibetan plateau, often called the “roof of the world” faced the most severe environment from the number existing at that time on our planet. Its average elevation exceeds 4500 meters, it is a cold and desolate place, and the amount of oxygen there is twice less than at sea level. Originally, scientists believed that the first humans appeared there for 15 thousand years ago, but new genetic and archaeological evidence suggests that the first appearance there of a person could happen much earlier — maybe even 62 thousand years ago, in the middle of the last ice age. More in-depth knowledge regarding the history of migration and population growth in this region may help to reveal secrets of the origin of Tibetans, but also offer keys to understanding how people adapted to conditions of low oxygen content at high altitudes.

According to the study, published recently in the American journal of Human Genetics, the experts today have a better understanding of the history of colonization of the Tibetan plateau due to the sequencing of whole genomes of 38 ethnic Tibetans and comparison of the results obtained from genomic sequencing of other ethnic groups. “The result was discovered a complex set of evidence of prehistoric migration,” says Shuhua Xu, a specialist in the field of population genetics, Institute of biological Sciences, Chinese Academy of Sciences. “The big surprise was the antiquity of the Tibetan sequenced DNA, continues Xu. They can be relevant to ancestors who lived in the period from 62 thousand years ago to 38 million years ago, and perhaps these figures refer to the earliest colonization of the plateau”.

When the impact of the ice age intensified after the first migration, genetic mixing between the Tibetans and other peoples stopped and so did tens of thousands of years, which suggests that migration in the region of Tibet has declined at the time to a minimum. “Likely migration routes were blocked by ice, says Xu. — It was difficult to pass even the most powerful hunter-gatherers”.

The team of Xu has carried out the first sequencing of the whole genome of Tibetan, and “the results obtained are quite impressive,” — says archaeologist mark Aldenderfer (Mark Aldenderfer), University of California, Merced (Merced), who did not participate in this study. As a result, “provided additional data on how different populations from a variety of backgrounds were United by their genes and, in the end, there were people whom we refer to today as Tibetans,” he adds.

The obtained data suggests that 94% of the genetic material of modern Tibetans are related to modern humans — perhaps they appeared in this region during the second migration wave, and the rest belongs to the extinct species. Modern Tibetan genome indicates the presence of mixed heritage: 82% percent of the genetic material of the Tibetans share with other inhabitants of Eastern Asia 11% Central Asians and 6% with the people of South Asia.

In addition, the Xu team identified specific Tibetan segment, which was very similar to the genome of Ust ‘ -Ishim man (modern humans who lived in Siberia 45 thousand years ago), and several extinct species, including Neanderthals, Denisovsky people and unknown groups. This segment consists of eight genes, and one of them is known as crucial for adaptation to high altitude. “This means that Tibet has always been inhabited, even in the most difficult periods in terms of climate,” says Xu.

This idea contradicts the widespread opinion that the population of the plateau died out in the harsh terms of the climate periods, including during the last glacial maximum, says David Zhang, a geographer from the University of Hong Kong, who was not involved in the work of the group Xu. Aldenderfer and other professionals recognize that this plateau could serve as a refuge for people during the ice age. “There were many suitable places to live (for these early populations) where the local conditions were not so bad — we are talking about the valleys of large rivers on this plateau,” he says.

Supports the idea of the population of Tibet and a study presented at the 33rd International geographical Congress, which was held last summer in Beijing. It team of experts reported the earliest archaeological evidence of human presence that date back to the period from 39 thousand years ago to 31 thousand years ago. The archaeological site where were found many stone tools and remains of animals, located on the banks of the river Salween in South-Eastern part of the Tibetan plateau.

Various lines of evidence are now consolidated and indicate a much more ancient period, and more permanent human presence on the plateau than previously assumed, says Aldenderfer. However, in his opinion, still need to find the missing pieces of a puzzle. “We need to conduct additional excavations to close these gaps”.