The terrible catastrophe that killed the ancient Maya is named 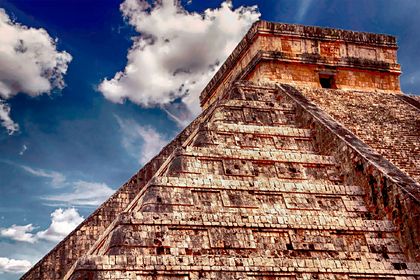 Scientists from the Spanish National Research Council concluded that 1590 years ago, the ancient Mayan civilization was partially affected by the catastrophic eruption of the Ilopango volcano, which killed all life within a radius of 40 kilometers. This is reported in an article published in the journal Proceedings of the National Academy of Sciences.

The researchers analyzed an ice core recovered from a glacier in Greenland and also radiocarbon dated charred wood remains found in the ash deposits of Ilopango. It turned out that the terrible eruption took place in 431 AD. The plume rose to a height of 45 kilometers, and the ash fell over an area of ​​more than seven thousand kilometers, reaching Greenland. A half-centimeter layer of ash covered an area of ​​more than two million square kilometers.

Experts called the Ilopango eruption 50 times more powerful than the eruption of St. Helens in 1980, in which 57 people died. Although the explosion did not affect the development of most of the Mayan civilization of the early classical period (300-600 AD), no one lived in the vicinity of the mountain for many years and decades.