The theory of the origin of people was declared insolvent 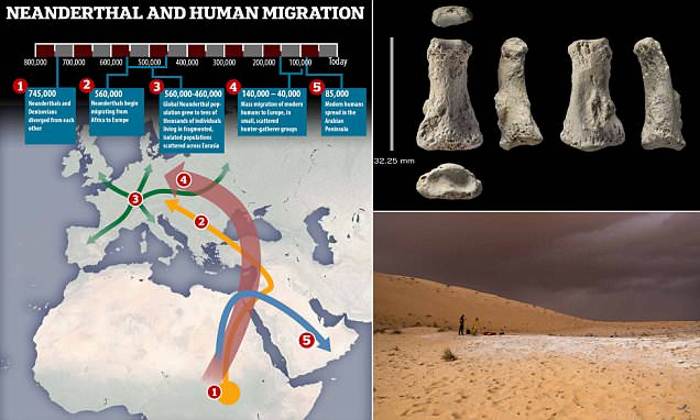 Scientists at Oxford University (England) discovered remains belonging to an ancient man, outside of Africa and the Levant. The age of the find is about one hundred thousand years. The discovery makes untenable the assumption that the main wave of migration of people from Africa began 60 thousand years ago. This is reported by the publication Science Alert.

According to the generally accepted hypothesis, the first Homo sapiens appeared in Africa 200-400 thousand years ago. It is believed that the resettlement of people of the modern type from the African continent began 177,000 years ago when they came to the territory of the Levant, east of the Mediterranean Sea. People who currently live in Eurasia, Australia and America are descendants of those who migrated 60,000 years ago.

However, recent archaeological findings have shown that Homo sapiens could have entered Eurasia 120,000 years ago. Researchers found a phalanx of a finger in Al-Vusta in the desert of Nefud in the north of Saudi Arabia. Dating with the help of uranium-thorium, luminescent methods and the method of electron paramagnetic resonance showed that the age of the bone reaches 86-95 thousand years. Thus, evidence was received that a man of a modern type was present in this region even before the main wave of settlement.

In January 2016, an international team of researchers proved that the age of human remains found in the Israeli cave Mislia in 2007 reaches 200 thousand years. In addition, in South and Central China were found the remains of a man, whose age was 70-120 thousand years.