“The Titanic of the ancient world” 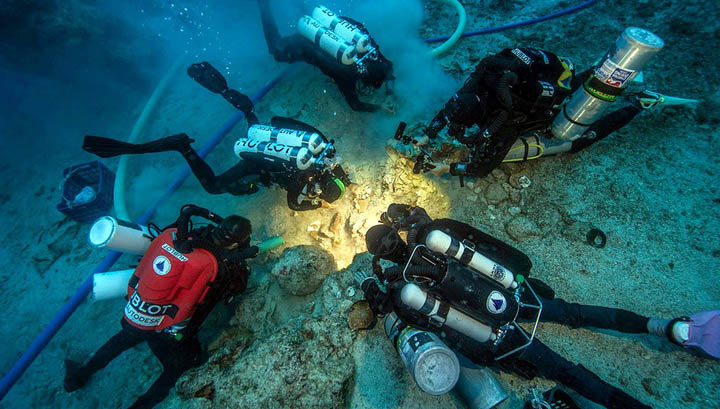 A lot of the Antikythera ship is not called “the Titanic of the ancient world is the biggest ever found ancient vessels, its length was almost 50 meters. It is on the wreck of this ship was found the famous Anticarsia mechanism, which is also called the Ancient computer.

An incredible discovery: the wreck of Anticarsia ship found human bones. They say they found another 31 August, but archaeologists decided to talk about the opening just now. “We are very excited. Because this has never found,” says marine archaeologist Brendan Foley (Brendan Foley), governing excavations.

Ancient bones found on land would not have produced a similar effect on the world of science. It’s all about the water, sea water: the remains were found on the wreck of a Roman ship sunk around 2070 years ago and lying at a depth of 55-60 m from the coast of the Greek island of Antikythera. In such circumstances, human remains for a long time “not live”. If the body is not covered with any protective layer (clay, metal, ceramics and the like), in an aggressive marine environment, the flesh and bones decompose very fast, which contribute to many fish and other voracious underwater inhabitants. 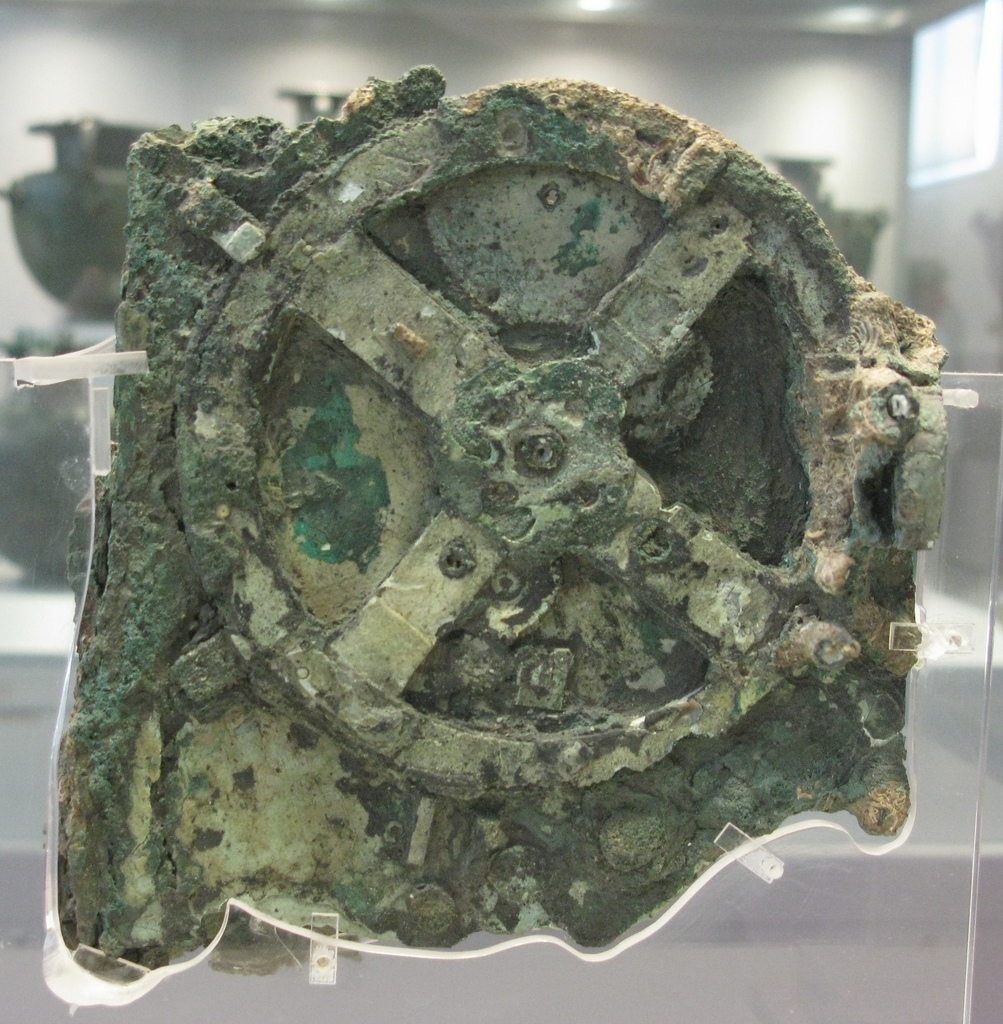 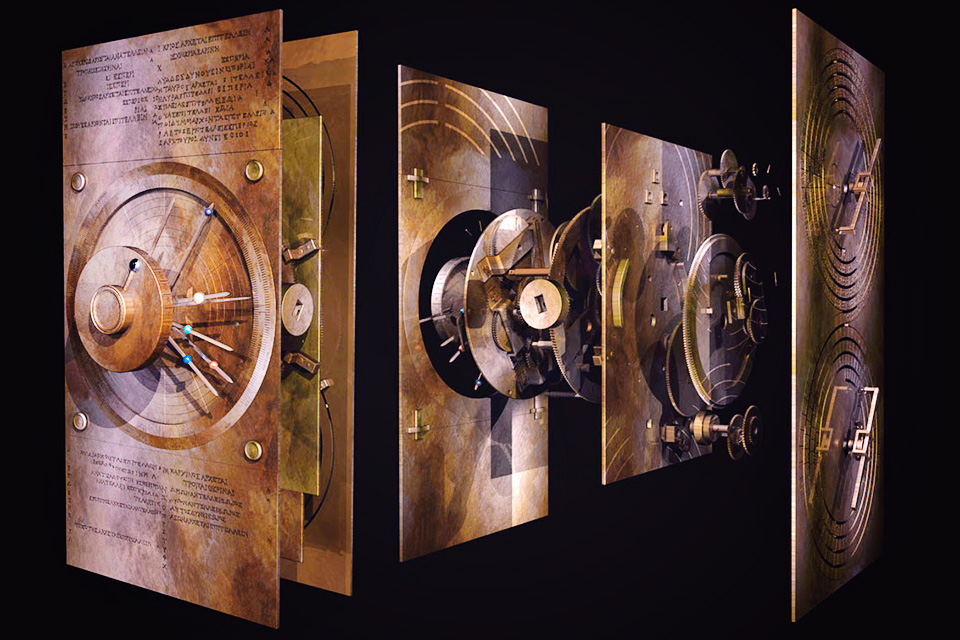 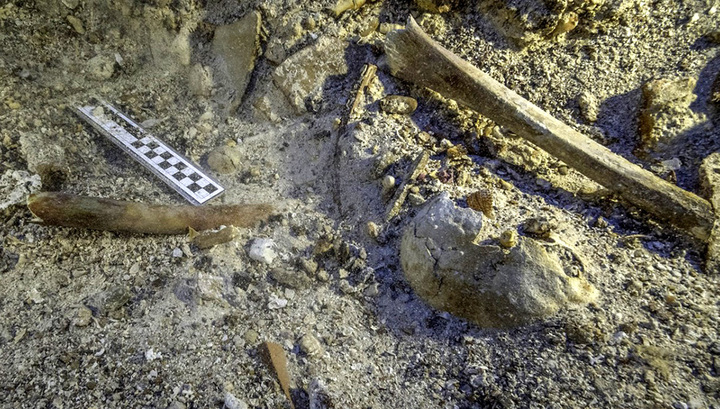 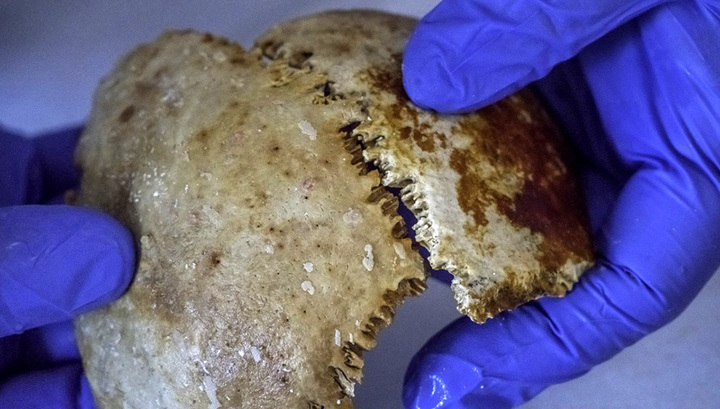 Similar findings can be counted on the fingers of one hand. Journalist Jo Marchant, author of the report in Nature, found the history of the issue, referring to the marine archaeologist Mark Dunkley of the Fund “Historical England”. According to Dunkley, skeletons on the seabed is indeed found, but we are talking about the “newer” ships, such as the English Mary Rose of the XVI century and the XVII century the Swedish Vasa. “The older the wreck, the less likely you are to find among the debris of human bones,” says Dunkley.

Greek archaeologist Dimitris Kourkoumelis working together with Brendan Foley on Antikythera knows only one similar case: off the coast of Sardinia was found a human skull in the helmet of a Roman soldier. The metal helmet protected the bones from decomposition. The second case remained unconfirmed: from the Greek island of the siren found the sunken sarcophagus with human remains, but the bones were gone before experts were able to examine it.

Surprisingly, the most famous and largest source in the ancient sunken bones – he Anticarsia ship. The first scattered fragments of human skeletons raised from the seabed Jacques-Yves Cousteau in 1976. The remains investigated Argyro Nafpliotis, osteoarchaeology from Cambridge. He found out that bones with Anticarsia vehicle belong to at least four individuals, among them a young man, a woman of unknown age and a teenager, which even could not be determined.

Unfortunately, these bones are no longer suitable for extraction of DNA: in 1976, no one could not imagine the future possibilities of science, so the bones are carefully washed, treated with conservation facilities, for years, kept warm and strongly infected the modern DNA that is operated in strict accordance with scientific knowledge of the twentieth century.

Modern researchers Anticarsia of the ship was not in a hurry to announce the new “portion” raised from the bottom of the bones. The first thing the head of the excavation Brendan Foley was called on Antikythera expert on ancient DNA geneticist Hannes Schroeder (Hannes Schroeder) from the Copenhagen Museum of natural history.

Schroeder admitted that he was initially skeptical – for all the above reasons. Even if the bones are physically preserved, two thousand years on the seabed to reduce the chances to extract DNA to zero. If it was, we wouldn’t be writing about the sensational discovery.

The bones are perfectly preserved thanks to a half-meter layer of sand and fragments of pottery, under which they found. Sand and shards are all that is left on the surface of the seabed near Antikythera: during the first excavations of 1900-1901 years divers have raised all valuable items that have managed to notice with the naked eye. Findings from Anticarsia of the ship already occupied several rooms in the National archaeological Museum in Athens, but modern archaeologists “see” better and deeper: the researchers confidently say that a large part of the cargo of the “Titanic of the ancient world” still rests at the bottom of the Aegean sea off the coast Antikythera.

“Protective layer” of sand and shards have provided a rare preservation of a 2,000 year-old bones, but whether they are suitable to extract DNA? Archaeologists gave Schroeder a fragment of the skull and jaw with three teeth, two bones of the arm, some fragments of rib bone and two hip bones – the set, by all accounts, belongs to one person.

Shredder couldn’t believe our luck: the fragment of the skull preserved are the most useful for geneticists, part of the so – called rocky part (pyramid) of temporal bone. Simply put, it is the seal behind the ears, in which DNA is preserved much better than in any other bones or even teeth. “It’s incredible that archaeologists have discovered these bones. If where can you find DNA in these fragments of the skull,” – shared his joy Schroeder.

After a week, the scientists promise to find out I still have to found the bones of DNA. If Yes, then a couple months will be spent on decoding and the analysis of genetic material. Archaeologists will continue excavations in the hope of finding new fragments of the skeleton or skeletons.

Why it was found so many human remains, unlike all the other wrecks of antiquity? The archaeologists have an answer. First, no ancient ship not investigated as thoroughly as Anticarsia. The second reason is the size of the vessel and its crew. Brendan Foley for sure calls a lot of the Antikythera ship “Titanic of the ancient world is the biggest ever found ancient vessels, its length was almost 50 meters.

Big ship – a big team of at least 15-20 people. The crash site is very close from the shore, the most likely culprit of the death of the ship – a sudden storm threw the ship into coastal rocks. The wrecked ship quickly sank, buried under the rubble of all who couldn’t get out.

It is known that Greek and Roman merchant ships often carried passengers, and sometimes slaves. “Part of the team may have time to leave the ship, but the people in chains, never had a chance,” says archaeologist mark Dunkley. For this assumption there is a reason: in August, found the bones visible traces of reddish iron oxide (rust), as if human hands were bound with chain or shackles. While this is only a guess. Further research will be able to tell more about the boy who died together with the famous ship.

Gender and approximate age of the victim of a shipwreck Hannes Schroeder determined by the size of the femoral bones and good teeth. Who was the lost boy? A slave, a prisoner or a member of the team? DNA “Anticarsia man” will give information about the color of his eyes and hair, about his ancestors and region of birth. It is known that the ship was Roman, but who is it floated? Greek, Roman, or native of the Middle East?

Traditionally, researchers decided to give the ancient remains of the name. Now their owner name is Pamphilos (Pamphylia) is a name was scrawled on one of the chalices for wine, found during excavations.

The Pamphylia is an incredible find, not only from the point of view of archaeologists. He’s like Ice man ötzi, will move forward the whole field of science.

The fact is that due to the extreme rarity of ancient sunken remains of modern methods of DNA analysis on them almost was not tested, explained Hannes Schroeder. Molecular genetics is developing with such speed that the methods used for DNA analysis of the remains from the ships Mary Rose and Vasa in 2013 (!) year, today, have become obsolete. Amplification of DNA by PCR (polymerase chain reaction) is the last day for archeogenetics because with this approach it is difficult to separate ancient DNA from modern contamination.

Shredder only came up with two suitable example of the DNA of grains aged 8000 years, were found on the seabed off the coast of England (the results were dubious), and the successful extraction of mitochondrial DNA from 12,000 year old skeleton found in Mexico – in the well with fresh water.

In fact, working with the DNA of Pamphylia will be the first of its kind, and its results – a key for further development of a universal method of analysis of ancient DNA, eliminating errors and inaccuracies.

“Imagination is difficult to stop. Who were these people crossing the Mediterranean sea 2,000 years ago? Perhaps among them was the astronomer who created a lot of the Antikythera mechanism?” – said Schroeder in a conversation with journalist Jo Marchant.

It’s amazing how many have already done for science these nondescript pieces of bronze. If not Anticarsia mechanism, perhaps neither the ship nor died with him people would not have received much attention of scientists who continue to search the wreckage of an ancient miracle.