The unique geological formation of Cappadocia in Turkey 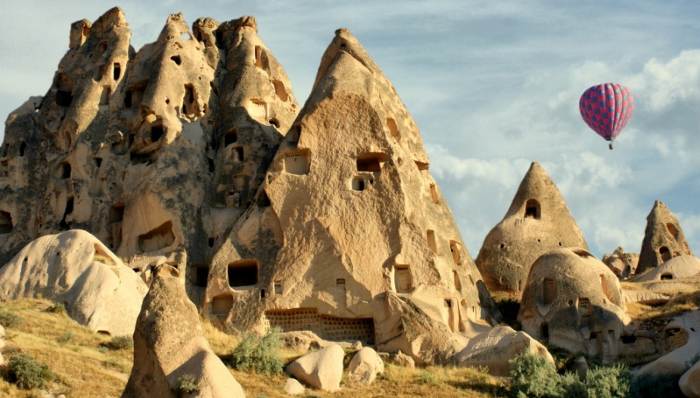 Cappadocia is a unique geological formation, famous for its unusually interesting landscape, a huge number of cave temples, cells, crypts and monasteries, the history of which stretches from the time of early Christianity, and underground cities created in the 1st millennium BC. This rich cultural heritage is located in the Central Anatolia region of Turkey. The territory of Cappadocia covers the provinces of Nevsehir, Nigde, Aksaray, Kyrsehir and Kayseri. The Goreme National Park, located in the central part of Cappadocia, together with the Cappadocian cave settlements, is on the UNESCO World Cultural and Natural Heritage List.

The most famous underground cities are Kaimakli and Derinkuyu, discovered by archaeologists in 1960. For many millennia, water and wind cut out from the volcanic tuff marvelous natural canyons, pillars, towers and pyramids. Surprising is not only the fantastic nature of the area, but also the cultural stratification of the Romans, the Hittites and dozens of other peoples who have left their mark on this land.

The boundaries of Cappadocia varied over time. Today this name is usually called its main core, which is located in the central part of the peninsula of Asia Minor, on the side, which has no access to the sea. It is a desert plateau with a continental climate, located at an altitude of 1000 m above sea level. In the south it is bordered by the mountains of Erciyes and Hassan, to the north it extends by rows of valleys to the salt lake Tuz Gyol and to the river Kyzyl-Irmak. In ancient times, these territories were called Cappadocia Great or Mediterranean. Regularly in the Cappadocia warehouse were included land that went to the Black Sea: Cappadocia Malaya, Upper or Pontus (although in history they are most often indicated under the independent name of Pont, who was periodically an independent state).

Cappadocia is famous for its unique geology – it was formed due to intense volcanic activity. This peculiar structure is due to two periods, a meeting of two opposite forces of nature about 65-62 million years ago: the period of volcanic eruptions, as a result of which the local lands were covered with tuffs and other geological rocks, and a period of erosion and weathering. At a time when mountains began to form here, in particular the Taurus range, deep cracks in the earth formed in middle Anatolia. As a result, magma erupting to the surface formed a series of volcanoes, thus a line of new volcanoes (Develi, Erciyes, Hasan, Keichiboyduran, Gyuludag and Melendiz) was built parallel to the Taurus ridge.

Pouring lava and formed tuff, filling the gaps in the soil, leveled the slopes and valleys, while creating a plateau. So here there were frozen lava flows, cones of extinct volcanoes, placer debris of pyrite and a layer of gray ash. The next stage is characterized by erosion and weathering. Due to the continental climate with significant and sharp temperature changes, cracks began to form in the rocks. The activities of ice and water contributed to the destruction of rocks, together with the impact of rivers and heavy rains. That’s how the glorified “stone pillars” of the peri-bajalars (“fairy fireplaces”) were formed – the remains in the form of stone pillars and stone mushrooms of the most bizarre shapes and shapes.

The name “Cappadocia” comes from the language of the ancient Hittites, which in translation means “country of purebred horses”. The history of Cappadocia dates back to the 5th millennium BC. For the longest period of its existence, this area was at the crossroads of civilizations, alternately entering the Hittite, Persian, Roman and Ottoman empires and other state formations, and serving as a battlefield for numerous wars.

The ownership of the Hittite Empire continued on this territory from the eighteenth to the twelfth centuries BC. She fell under the onslaught of aggressive tribes and “peoples of the sea”, who moved to the Armenian Highlands. For several centuries Cappadocia belonged to the Persians. From here, gold, mules, rams and horses were transported regularly to Persia. The invincible cavalry of Darius and his son Xerxes had at their disposal 1500 remarkable Cappadocian horses, which are the pride of the empire.

Alexander the Great conquered Cappadocia from the Persians. After his empire disintegrated, the country enjoyed independence for a while, but after 350 years it became a Roman province. The Romans behaved strangely in this situation – they did not alter everything here in their own way, and only managed to build new roads. From ancient times, trade routes from Europe to Asia Minor – from the II millennium BC, passed through this area, the Assyrian merchants had representative offices here – “Karuma”.

The grain of Christianity in this land of mountains and shady ravines was sown by the apostle Paul in the first century of our millennium, and the first bishop of Cappadocia became Basil the Great – it was on the local earths after years of pilgrimages through Palestine and Egypt that he found harmony and pacification. The first Christians began to build underground cities here to protect themselves from the raids of the Saracens – so they called the Muslims. The multi-tier labyrinths created in those days are still in excellent form. A small period of time, Cappadocia was owned by the Byzantines, then it fell into the possession of the Seljuk Turks for a long time. They were actively engaged in construction – a large number of mosques, fortresses and madrassas built by them – spiritual schools – were preserved in Turkey. They built powerful “palaces for travelers” – the so-called caravanserais.

Sultan Khan is a caravanserai, which is located on the border of Cappadocia. He was a perfect defense against the vicissitudes of the nomadic life. The merchants could rest here, replenish their supplies, wait out the terrible heat or bad weather. Wanderers were also offered services of a doctor, stables, bath-hamam and mosques. Tourist center of Cappadocia is the town of Goreme. At the entrance to the city there is a beautiful open-air museum, it is a kind of valley where ancient rock churches with frescoes are collected on various subjects from the New Testament.

Cappadocia is famous for its underground cities, carved into the rocks by the first Christians, who fled in the desert corners of Asia Minor during the reign of Emperor Diocletian. For centuries, people lived in these caves. About half a century ago, near the Cappadocian village of Derinkuyu archaeologists discovered underground cities that went deeper into the earth for more than tens of meters, represented by kilometer labyrinths of galleries, residential and utility buildings. On the seven tiers of the dungeon are barns, wells, refectory, ventilation shafts, stables, wine cellars, a prison, a church and a school. The door, which closed the passage to the cave cities, served as huge stone boulders.

To keep the secrets of the dungeon – was the main goal of the inhabitants of the city, on which their life depended. In the days when the Arabs visited the city or even the Mongols, the inhabitants went underground. Reserves and stores were kept in transitions and galleries. All the cities had secret exits. Multilevel, ventilation and secret exits made such a city safe and impregnable.

In a narrow corridor here and there there are steps that have been cut straight in the rock. Inside, there is a twilight and a pleasant coolness – it is especially pleasant to visit after the street heat. Having visited this place, it is necessary to pay attention to the colors of the arrows depicted on the walls, the blue leads to the exit, and the red ones to the bottom of the underground city. On both sides of this passage are spacious rooms – this is the apartment of the inhabitants of the ancient city.

Cappadocia is famous for its masters: potters, winemakers, weavers and stone carvers. Through this locality the longest river of Turkey – Kyzyl-Irmak – the Red river flows. Its name is due to the red color of the water, which is due to the composition of clay, painted with iron salts. Even long before our era, on its clay banks grew a city, which today is called Avanos. Pottery in this area was spread during the rule of the Hittites – their technique to this day used by craftsmen Avanos. Each product is dried in the sun for three days, then sent for firing. Add to the stove, in which the dishes are burned, not only wood, but also bundles of sheep’s wool, straw and raisins. Thanks to this special method of processing, the dishes made by local potters ring like a bell if you tap on it.

The rich history of these places inspired the famous poet Joseph Brodsky to write the poem “Cappadocia”, which tells about the wars of Mithridates. There is an assumption that the unusual landscapes of Cappadocia and its underground houses were inspired by George Lucas in creating the fantastic landscapes of Tatuin in the film “Star Wars. Episode IV. New Hope”. Moreover, residents can show the places where the film was allegedly shot. Those who had the fortune to visit Cappadocia constantly tell us that when twilight gathers over these places, and people immerse themselves in the kingdom of Morpheus, good fairies fly out of their underground hiding places to the top of one of the rocks. But they can only be seen by those who have a pure, kind heart, and who have not lost the ability to believe in magic and fairy tales.