The universal language of Isaac Newton 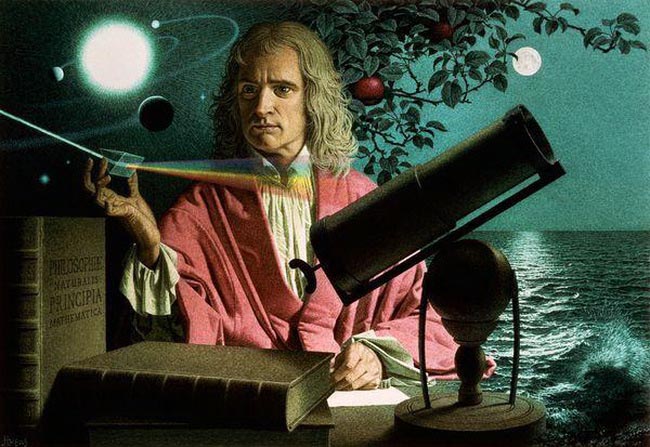 The great physicist Isaac Newton is famous for many things. For example, he created the three laws of mechanics and the classical theory of gravitation. In addition, scientist has developed the differential and integral calculus, wrote numerous works on optics and was seriously interested in alchemy. However, few know that even as a College student Newton tried to create its own universal language.

The young Newton believed that meanings of words are determined completely haphazard. So it seemed to him that it would be much easier if there is a more specific formula which will allow people to determine the right value of a word, if just to hear it.

“Let it be to name things and objects from the same specific sphere began with the same letter. For example, words that define “tools”, let start with the letter “C”; “animals” with the letter “t” and different “state of mind” with a “b” (with regard to English, of course — approx. ed.), ” said Newton.

Linguist arika Okrent and Illustrator Sean O’neill talk about this idea in more detail in his video:

It should be noted that in their desires Newton was not alone. People who create new languages (and it is at a very serious level, down to the grammar) as a hobby are usually called “ezcommerce”. Perhaps the most famous artificial language can be considered as Esperanto, created in 1887. Most easycommerce meet the realities of science fiction and fantasy, where languages played an important role. For example, John Ronald Reuel Tolkien is the author created them in the language of the elves for his trilogy “the Lord of the rings”. David J. Peterson, in turn, created specifically for duracin replicas on the dothraki language in the TV series “Game of thrones”. Mark Okrand known for creating many artificial languages for a fantasy world, among which the Klingon, which is first heard in the movie “Star trek 3: the search for Spock”.

All these artificial languages, tend to have a meager vocabulary of several thousand words. However, there are some, like Esperanto, which today are more than 2 million people in Europe, East Asia and South America. Of course, exists in the world and translated “hamlet” into Klingon, as well as a small but very dedicated community for the study of the language of the Na’vi, created by linguistics Professor from Caltech Paul Frommer specifically for franchises, “Avatar”. However, none of these languages did not spread beyond his invented world into the real one.

As you might guess, Newton’s attempt also failed. Realizing that the implementation of this idea will need to spend their entire lives and while not being sure of the success, he had abandoned his attempts and, fortunately, moved on, lost in mathematics, physics, astronomy, and philosophy. Principia (Mathematical principles of natural philosophy Newton) themselves would in fact itself has not!

Isaac Newton studied mostly the occult. Galileo was an astrologer who believed that if you stood in the light of Jupiter, that it would cure your hemmorroids or something. Albert Einstein said that if science contradicts the god from the bible, then it is no longer science, and that is why he believed the world was static. Charles Darwin was a closet thiest, who pretended to be an atheist so as not to be derided by the scientific community.

Not all who are superstitious are intelligent, but all of the intelligent people are superstitious. Unfortunately, these days we’re under the heel of mental midget celebrity pop-science scientists like Richard Dawkins, Neil Degrasse Tyson, and other opinionated confrontational verbally-combatant pseudo-intellectuals.