The unsolved mystery of the disappearance of the Norfolk Regiment 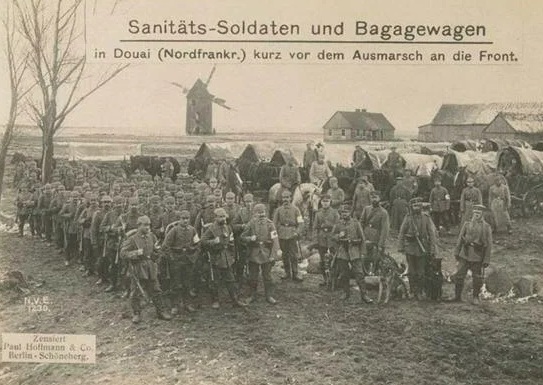 The history of the First World War is full of incredible, mysterious, sometimes even mystical events. A special place is occupied by the disappearance in August 1915 of a part of the Norfolk Regiment, which was formed mainly from the local militia and volunteers. What was it? Turkish captivity, alien abduction or moving to a parallel world?

It all happened in August 1915 during the military campaign near Gallipoli. It was here, on the plain near the Suvla Bay, that the decisive battle took place, where the Turkish military unit was located in well-fortified positions.

The British were faced with the task of driving the enemy out of the fortified area. So, the Norfolk regiment landed in Suvla Bay at the end of July. A picture of real hell appeared before the eyes of the soldiers. The sun scorched mercilessly, the hot wind carried clouds of hot sand and dust, which clogged the eyes and ears of the military.

In addition, there was also a dry, salty lake, and the salt crystals shone so brightly in the sunlight that they deprived people of the opportunity to assess their surroundings. To this hellish picture, it remains to add hordes of green fat corpse flies, which covered everything around in a solid carpet: food, trenches, latrines, bodies of the dead and wounded.

Due to these unsanitary conditions, the soldiers developed dysentery. The illness claimed the lives of many, and those who survived were emaciated and weakened. There was simply no strength to conduct a full-fledged combat operation. Then Commander-in-Chief Ian Hamilton decided to bring in fresh forces. And on the appointed day, the British, lining up in battle formation, moved towards the enemy …

Beginning of the End

On August 25 at 16:00, battalion 1/4 of the 163rd brigade, under cover of artillery fire, had to cover several kilometers. But communication, like everything else in this operation, was in a deplorable state. Therefore, the artillery, not having received the coordinates, fired aimlessly.

Lacking cover, the 1/4 battalion was able to advance through the open space only 900 m, and then was pinned to the ground by enemy machine-gun fire. At the same time, battalion 1/5 was advancing from the right flank, and there were no serious obstacles in its path.

Everything seemed to go according to plan, until a chain of mysterious and inexplicable events began. Sir Hamilton described them in his report to the Secretary of War:

“The battle was hot and bloody, the ground was stained with blood, numerous wounded remained on the battlefield and only returned to their original positions at night. However, the colonel with 16 officers and 250 soldiers continued to press the enemy. They went deeper into the forest, and they were no longer seen or heard. None of them were seen again, none of them came back. ”

267 people disappeared without a trace!

The infantrymen of the third platoon of the first infantry company recounted what they saw from their side. A silvery cloud, which seemed to be very dense, fell on the soldiers of the 1/5 battalion, reaching a length of about 240 m, about 60 m in height and width. Then a few hundred more soldiers entered the cloud, but none of them came out of it.

After some time, the cloud rose, joined other clouds, despite the strong wind, hanging motionless in the sky, and headed towards Bulgaria, and then completely disappeared from sight.

The Norfolk Regiment disappeared without a trace. Witnesses claim that there were no shots or other sounds. Everything happened in complete silence. In this regard, the command decided that the soldiers were captured by the Turks with the help of some insidious and cunning tricks.

According to official documents, the entire unit was considered missing. In the British campaign reports, the version of what happened was as follows:

“The regiment was engulfed in a fog of unknown origin. This fog reflected the sun’s rays in such a way that it blinded the gunners-gunners, which made it impossible to provide fire support. Two hundred and fifty people are missing. ”

After the surrender of Turkey, England demanded the return of the prisoners of war. However, the Turkish authorities argued that no military operations were conducted with this regiment, moreover, they did not even suspect of its existence: “During the Gallipoli operation, the Turkish side did not carry out any military operations in the area near Suvla Bay in the Kayadzhik-dere hollow. And also did not capture British soldiers during all the hostilities near the Suvla Bay. ”

Nevertheless, the British, as the victor, decided themselves to check the places where the battles took place. Their search was crowned with success: on the battlefield, badges of the Norfolk regiment soldiers, shoulder straps, boots and some items of military clothing were found.

And in a nearby village, they managed to find a peasant, who said that in August 1915, on his site, he found many bodies of British soldiers.

“The bodies were scattered over an area of ​​about 2.5 square meters. km. All of them were terribly broken, as if they had fallen from a great height. I got scared of evil spirits and threw all the bodies into the nearest gorge. ”

The British removed the bodies of the dead from the gorge. They turned out to be 185, of which 122 allegedly belonged to the soldiers of the Norfolk regiment, the rest – to the military from the Cheshire battalion. Of the 185 bodies, only two were identified. But the British command confidently declared that it was the missing Norfolk regiment that had been found. This led to the conclusion that the Norfolk were destroyed on the battlefield without violating the enemy’s line of defense.

However, there are some details that give rise to doubts. For example, the fact that the bodies were scattered over an area of ​​2.5 square meters. km, that is, 750 m behind the Turkish defense line, and this is already a decent distance from the battlefield. Again, why only 185 bodies out of 267 were found, where did the rest go? Why were only two identified? And, finally, where does such a strange character of damage come from: “as if dropped from a height”?

The archives on the case of the regiment’s disappearance became available only in the 70s of the last century. And immediately new versions and hypotheses began to be born, the story acquired new details. For example, it became known that there were eight such strange clouds, and the largest of them moved against the wind, as if chasing soldiers. In this regard, an alien version appeared, it is actively supported by ufologists. According to her, the soldier was abducted by a UFO (cloud), and some of them were taken, and the rest were destroyed.

This explained that the injuries to the bodies, according to medical reports, were of such a nature as if they had been dropped from a great height. In his book “Beyond the Absurd Present” Emil Bachurin writes:

“The color and shape of the clouds is a clear disguise … In the Suvla Bay, several” similar “clouds hung motionless, despite the breeze,” watching “the theater of operations or” covering “the” cloud “in the stream valley.”

Another popular version of events: the Norfolk regiment moved to parallel worlds, or fell into the past or future. And the cloud is nothing more than a portal to another dimension. Some adherents of this version even associated it with the experiments of Nikola Tesla, who at that time reached the zenith of his fame.

But no matter how fantastic and tempting these versions are, there are also quite real ones. For example, that the Turks used chemical weapons, which, for obvious reasons, they were afraid to admit. The unknown gas formed a high-density cloud, so the wind could not disperse it.

For three years (from 1915 to 1918), the front could well have shifted by 750 m, so the information about the location of the corpses relative to the front line is somewhat distorted. Well, the heavily damaged bodies can be explained by the fact that the Turks did not stand on ceremony with the dead opponents and threw them into the ravine.

If we assume that the cloud is still an ordinary natural fog, then, quite possibly, the observers could not see the hand-to-hand combat between the Turks and the British that took place in it. And the latter were, of course, defeated. After all, the janissaries were always famous for their ability to conduct close combat, therefore, during the Turkish wars, Russian infantrymen were strictly forbidden to engage in hand-to-hand combat with them.

And, finally, a completely inglorious option: the British themselves laid down their regiment, without coordination, starting artillery fire, and then covered their sins with a kind of dense fog, supposedly not appearing at the right time.

Unfortunately, we do not know what actually happened, and, sadly, we hardly know. We are left with only guesses …