The Vikings were not the highest race 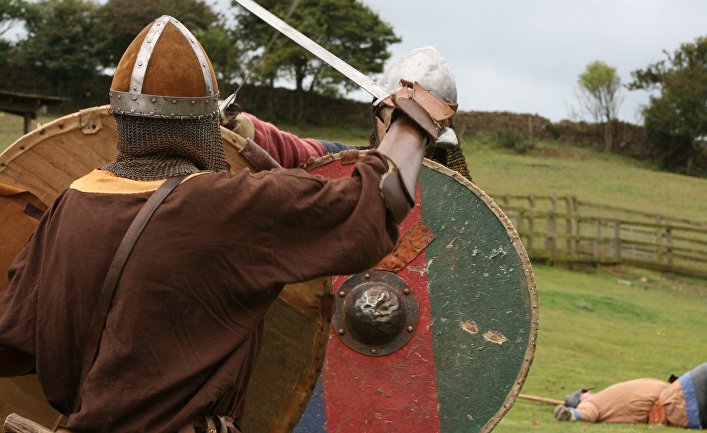 In modern English, the word “Viking” appeared in 1807, in the era of growing nationalism and imperialism. In the following centuries, stable stereotypes and associations associated with Vikings were consolidated, for example, wearing horned helmets or belonging to a society where only men could achieve a meaningful position.

During the XIX century, the Vikings were portrayed as the predecessors of European colonists. The idea of ​​a German superior race, rooted in primitive scientific theories and nurtured by Nazi ideologists in the 1930s, took root. These theories have long been disproved, but the opinion of the ethnic homogeneity of the Vikings remains widespread – especially among the white racists.

In modern culture, the term “Viking” is almost synonymous with the Scandinavian in the period between the 9th and 11th centuries. We often hear phrases like “Viking blood”, “Viking DNA” and “Viking ancestors”, but in the Middle Ages this word mattered differently from the one we use today. Then it meant a kind of activity: “go the Viking”. Like modern pirates, the Vikings characterized ease of climb, which did not apply to most of the Scandinavian population remaining at home.

Although the current word “Viking” appeared in the era of nationalism, the 9th century – the time when the Vikings’ raids spread beyond Europe today – was different. Modern states – Denmark, Norway and Sweden – were only just beginning. Local and family ties meant more than nationality. The names that Viking described to their contemporaries – “vizings”, “Russes”, “mazhes”, “wives”, “pagani”, “pirates” – most often did not have ethnic coloring. When the word “dans” began to be used in the English language, consonant with the “Danes”, they were designated representatives of various peoples who were members of the Viking ranks.

The mobility of the Vikings led to a mixture of different cultures among them, and their trade routes stretched from Canada to Afghanistan. A distinctive feature of the early successes of the Vikings was the ability of the latter to borrow elements of many cultures, whether Christian in Ireland, or Islamic in the Abbasid caliphate.

The achievements in archeology over the past decades indicate that in the early Middle Ages people and goods moved at distances greater than previously thought. In the eighth century (before the Vikings’ raids reached their peak), the Baltics was a region in which Scandinavian, Frisian, Slavic and Arab merchants often contacted each other. It would be wrong to assume that the Vikings’ early campaigns were only swift raids conducted directly from Scandinavia and immediately returning home.

Recent archaeological and textual research indicates that during their campaigns the Vikings made a number of halts in various places (whether for rest, replenishment of supplies, collecting donations and ransoms, repairing equipment or collecting information). This led to the formation of more stable relations with different peoples. In the 830s and 840s, alliances between Vikings and local tribes were noted in Britain and Ireland. By the 850th, the Irish villages were torn by mixed groups of Gaelic (gaedhill) and foreign (gaill) cultures.

There are written documents from Britain and Ireland, condemning and seeking to prevent the accession to the Vikings of local residents. They testify that the Vikings’ detachments were not limited to one people. Like later pirate gangs (for example, Caribbean pirates at the dawn of modern times), during their travels, the Viking teams often lost their members and accepted new members, thereby including rejected representatives of various cultures and classes.

The cultural and ethnic diversity of the Viking Age is only becoming more apparent due to finds in the burial grounds and treasures of the ninth and tenth centuries. In Britain and Ireland, only a small fraction of the items belonging to the Vikings were made in Scandinavia.

The Galloway treasure, discovered in southwestern Scotland in 2014, includes items from Scandinavia, Britain, Ireland, continental Europe and Turkey. Cultural diversity is a distinctive feature of the Viking finds. Analysis of skeletons, carried out with the help of the latest scientific methods in the places of stay of the Vikings, revealed a mixture of Scandinavians and foreigners without ethnic division in ranks and sexes.

The evidence shows the mobility of the population and the mutual influence of geographically distant cultures, caused by the trading networks of the Vikings.

The Viking Age was a key period in the process of the birth of the states of Northern Europe, and by the eleventh and twelfth centuries they were trying to define their national identity and develop suitable myths that would explain its roots. This led to the fact that in the once-populated areas of the Vikings, special attention was paid to everything that connected them with Scandinavia, but what did not have a relation to Scandinavia