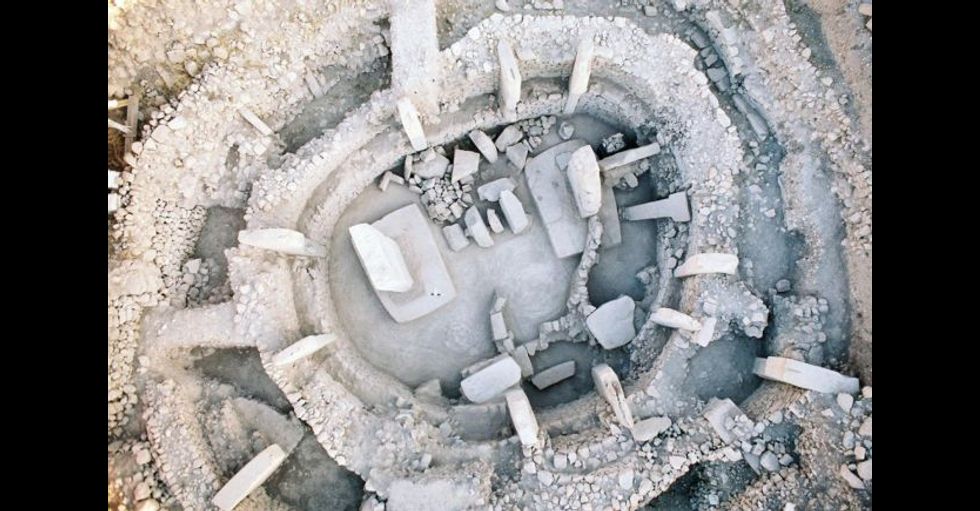 Hunter-gatherers might have built the world’s oldest known #temple on a precise #geometric plan, according to new findings.

The Neolithic site, known as #Göbekli Tepe, is perched atop a limestone mountain ridge in southeastern #Turkey. The site’s T-shaped #pillars, which are carved with mystic drawings of animals, abstract symbols and human hands, are arranged in giant circles and ovals — each structure is made up of two large central pillars surrounded by smaller inward-facing pillars.
Göbekli Tepe (which translates to “potbelly hill” in Turkish) was built some 11,000 to 12,000 years ago — hundreds of years before any evidence of farming or animal domestication emerged on the planet. So it’s thought that this massive undertaking was the work of hunter gatherers.

The impressive construction project, which predates Stonehenge by 6,000 years, is “a deviation from the hunting and gathering way of life,” said senior author Avi Gopher, a professor in the Department of #Archaeology and Ancient Near Eastern #Civilizations at Tel Aviv University.
German archaeologist Klaus Schmidt discovered the site — which appeared to be an ancient place of worship or religious gathering — in 1994. The discovery sent shock waves through the field and challenged a long-standing theory that organized #religion appeared only after cultures began adopting agriculture.
But with only a small fraction of the megaliths excavated, and ground surveys suggesting that at least 15 more of these circular enclosures are hidden underground, there’s still much unknown about the site and the hunter-gatherers who built it.

One major mystery is how these different circular enclosures relate to each other. Were they all used at once or was one built and then abandoned and backfilled before the next was built?

To figure this out, Gopher and doctoral candidate Gil Haklay, also at Tel Aviv University in Israel, used a computer algorithm to analyze the underlying architecture of the site. The group measured distances within the enclosures and between the enclosures, the largest of which is more than 65 feet (20 meters) in diameter.

They found that the two centermost pillars aligned exactly with the midpoint of the circular structures. What’s more, when they drew an imaginary line connecting the centerpoints of three of the structures, they found that it made a nearly perfect equilateral #triangle, or one with three equal-length sides.
This suggests that these three structures were planned together in advance and built according to a “#geometric design,” Gopher said. Archaeologists believe that the hunter-gatherers must have excavated and moved the limestone rocks from a stone quarry nearby.

Building one of these structures is a large project, but all three planned together means that these people had access to a lot of working power [and] a lot of energy.