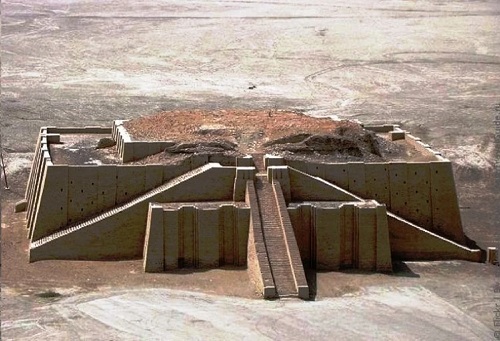 Mesopotamia is a cradle for several ancient civilizations, which left behind many buildings, megaliths and ruins. Some of them are so huge and made with such high quality for that time that they cause great surprise and bewilderment. Let’s talk about one of these finds.

The Great Ziggurat (Ziggurat of Etemenniguru) in Ur, or the Ziggurat of the moon god Nanna, is a New Sumerian stepped pyramid-shaped temple complex in the ancient city of Ur, whose ruins are located near the capital of the modern Iraqi governorate of Di-Qar, An-Nasiriya.

In the 3rd millennium BC, Ur was one of the most important Sumerian city-states in Ancient Mesopotamia. The monument was built in the early Bronze Age (in the 21st century BC). By the 6th century BC (New Babylonian period), it was badly destroyed, but was rebuilt under King Nabonidus. Today, the Great Ziggurat is one of the best preserved and most grandiose structures of ancient Ur.

The monument is a massive stepped pyramid 30 meters high with a rectangular base 64 meters long and 46 meters wide. True, the indicated height is just an assumption, since only the foundation of this ancient structure has survived to this day.

Initially, the ziggurat in Ur consisted of several trapezoidal platform steps built on top of each other. At the same time, the solid core of each step was made of adobe bricks and faced with fired bricks on the outside. This outer layer protected the core of the pyramid from precipitation and other external influences.

Since the Mesopotamian deities were usually associated with the eastern mountains, the ziggurat could serve as the personification of the mountain dwelling of one of them. Apparently, the inhabitants of the city believed that the ziggurat was the place on Earth where the god Nanna decided to settle. Therefore, nothing was installed on top of the structure, except for a sanctuary in honor of him.

The construction of the monument began during the reign of King Ur-Nammu, the founder of the III dynasty of Ur (presumably at the end of the 21st century BC) and was completed during the reign of his son, King Shulga. The ziggurat of Etemenniguru was located in a temple complex on the territory of the administrative center of the ancient city-state. It was dedicated to the moon god Nanna, who was the patron saint of Ur.

The 48-year rule of King Shulga was a period of unprecedented flourishing of the city-state. Under him, Ur became the capital of an entire empire that controlled a significant part of Mesopotamia.

However, the death of this ruler was the beginning of the decline of Ur. Since the sons of Shulga were unable to preserve the integrity of the empire he created, it soon disintegrated, and Ur itself was plundered by the Elamites. After that, the once mighty city was ruled, replacing each other, by several foreign kings.

In the 4th century BC, the fate of the city suffered another blow. This time, nature itself acted as his enemy: when the Euphrates River changed its course, the inhabitants left Ur due to the lack of water for irrigating the fields. As a result, the city was consigned to oblivion.

However, in the 19th century, European explorers rediscovered a number of the ancient city-states of Mesopotamia. In one of them, Ur, during the excavations carried out, the ruins of the Ziggurat of the moon god Nanna were found. Since then, a large amount of restoration work has been carried out to restore this ancient structure to its former splendor.