Traditions about the Underworld 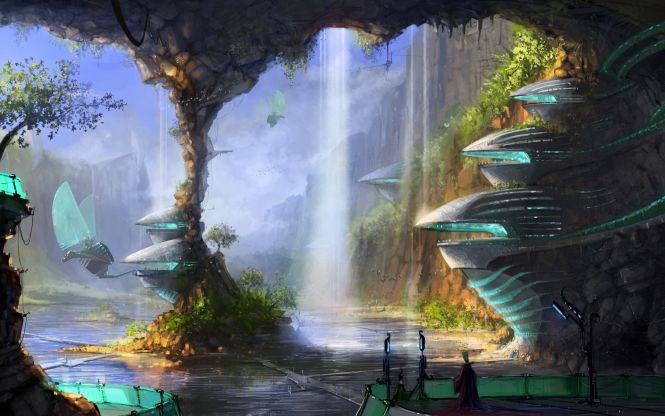 In the traditions of different peoples, the story of the withdrawal of sentient beings inhabiting it is widespread.

This applies to the naga, the hurricane, the Vievich and all the other serpents; rakshasas, hekatonhayers, fomors and other many desperate and formless creatures, chudis, dwarfs, gnomes and other dwarfs, adityas, daityas, danavas, the tribe of the goddess Danu / elves and other humanlike creatures. They descended into the ground during disasters, which often coincided with the defeat of their people in the war and resulted in the destruction of the former world. A variant of this plot is the withdrawal of many of the listed creatures into the sea, beyond the sea and into the depths of the sea.

In the Irish and Welsh sagas, as well as the Indian, Indochinese and Polynesian epics, there is a close connection between the underground and underwater worlds and it is said that one could get to the secret underground roads from one world to another.

In legends, the underworld is seen as a place of imprisonment of beings once on Earth – Hundred-hekathonheiters, titans, fallen angels, etc., a fabulously rich country full of gold and precious stones inhabited by naga, vievichi and other snake-eaters, and according to some legends also daityami, danavami and elves.

By Slavic, Nenets, Komi-Permyak, Lappish (Saami), Scandinavian, Germanic, Altaic, West African, Polynesian and other legends, the underworld served as the last refuge of the choodles, the chaklis, the dwarves, the iebans and other dwarfs, the main occupation of which was the extraction of useful fossils.

The descriptions of the underworld in the ancient Indian literature, Indochinese legends, Irish and Welsh sagas, legends of the peoples of the North and other peoples make it possible to trace the change in ideas about it, depending on the time of the creation of the tales. Initially, it was viewed as a very real and achievable subterranean country or refuge, where the gods or demigods and various demons descended or were overthrown. Between the inhabitants of the “lower” and “upper” worlds for quite a long time there were contacts. The creatures that lived on earth descended and remained there, and the inhabitants of the underworld came to the surface and lived among the creatures that inhabited it. Often the penetration from one world to another resulted in marriages between men from the “upper” world and women from the “lower” world or vice versa. As a result, children were born who inhabited one of the worlds.

In the book “Disappeared inhabitants of the Earth” I explained why the ideas about the underground world and its inhabitants changed: after tens of thousands, or hundreds of thousands or even millions of years, the writers of the stories simply did not know what the world really is. Only vague echoes of very ancient legends about its existence reached them, therefore they gave all the inhabitants of the “lower” world ghostly, unnatural features, or made them something similar to the souls of deceased people and ghosts. And this, in turn, prompted many researchers of folklore to compare the underworld with the world of the dead or the gloomy kingdom of Hades.

Consequently, the underworld as a country – at least in the form in which it is depicted in the early legends – could not be a world of the dead. It was a world inhabited by beings of flesh and blood. They were forced to descend there whenever global wars and catastrophes occurred on the planet. After all, their choice was not great – to fly into space, go down under water or build shelters underground. And in most cases, the indigenous inhabitants of our planet, closely connected with the earth and, perhaps, simply did not have enough space and underwater vehicles, did the latter.

You can ask me whether there is any confirmation of all of the above. After all, if there have been a dozen disasters on Earth, the earth’s crust must be covered with artificial underground cavities and represent a sort of “sieve”.

My answer is yes. Sources of information on this account are the numerous publications of various authors from ancient times to the present day, the teachings of secret schools and the stories of explorers and travelers. All of them confirm that a ramified system of interconnected underground tunnels pierces our entire planet.