Treasures found in the Kremlin in Russia 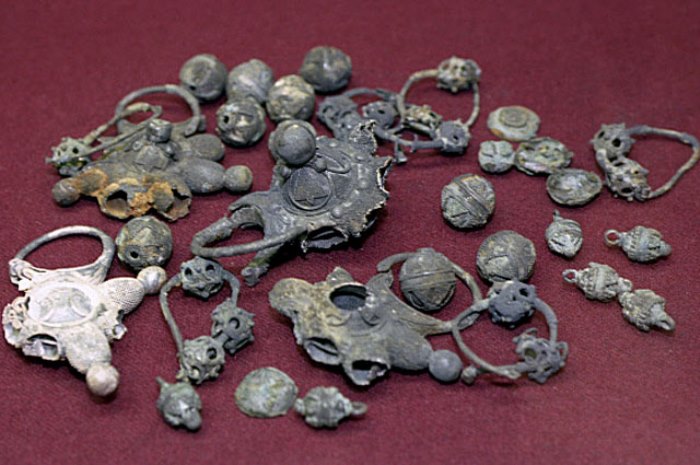 Treasures on the territory of the Kremlin were found more than once. The first discovery dates from 1773 at the time when construction work is being carried out. In that place are found ancient silver coins.

Then followed 1930-1940, which turn out to be very rich in coin finds. They find treasures in the 1930s on the territory of an ancient fortress. Almost a hundred silver coins and eight bars of silver were found near the Spassky Gate. Researchers came to the conclusion that the find refers to the XIV century.

It was the earliest of coins. An interesting fact is that cash ingots, or poltiny, were used at that time as large payments and in international trade. The weight of such ingots was from 94 to 97 grams. From written sources it becomes obvious that the poltiny were used not only as payment, but also were the main material in the manufacture of jewelry.

But this was only the beginning. In the 1940s they discovered a very large treasure – as many as 34 thousand coins! On a larger number of coins were related to the times of Tsar Mikhail Romanov, who were in 1613-1645.

In addition to the numerous coins, 4 gold-plated silver earrings with pendants made of sapphire, pearls, almandine and coral were found, 3 buttons of silver, a silver ring, 3 silver crosses. Circumstances pointing to the reason for concealing such a vast treasure remain a mystery to historians.

An amazing finding is the treasure found in 1965. He was found during construction work near the Moscow Kremlin. The workers found various remains of an ancient building in which they found a treasure. The facade of the building consisted of tiles, in one of which a treasure was found.

In the history of hidden things, researchers have not yet met the most bizarre findings – they were the chisel handles, pharmacy containers, birch bark boxes and gun barrels. Treasure also hit the figure found – as many as 1239 silver cents! The total weight of the coins reached eight hundred grams.

From this find, 69 coins belonging to the time of Tsar Fyodor Godunov (1605) aroused great interest among researchers of monetary circulation. Interest is due primarily to the fact that the king stayed on the throne for slightly more than 2 months. The intensity of events forced the unknown to hide his numerous savings. Because these coins are listed in a very rare category and are highly valued.