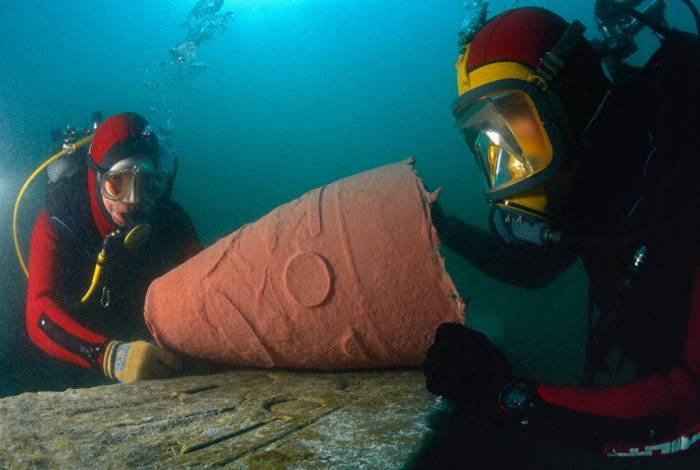 British archaeologists have presented the first results of underwater excavations in the Hellenistic cities of Canopus and Tony-Heraklion, submerged under water in the dark ages of the middle Ages according to yet unknown reasons.

In the Nile Delta around the 5th century BC there were two major port cities of Canopus and Tony-Heraklion, founded by Greek and Macedonian colonists during the reign of the 26th dynasty of pharaohs. These cities have successfully survived the occupation of Egypt by the Persians, its conquest by Alexander the great and the transition under the dominion of Rome during the reign of Cleopatra.

Approximately 750-800 years of our era, something strange happened – both cities have mysteriously disappeared, having gone literally under water, and their inhabitants left both millennial policy. The place where they built these cities, remained a mystery until the beginning of the current Millennium, when the British and French archaeologists from the Institute of underwater archaeology in Paris, started large-scale excavations in the Nile Delta, in a place called “the harbour of Abu Kir.

Excavations on the site of Canopus and Tony-Heraklion is still going on, and to date, scientists have extracted from the bottom of the Nile thousands of artifacts, including hundreds of statues, gold and bronze jewelry, as well as 750 anchors and 69 ships sunk or scuttled in the sea off the coast of these ports.

This week British archaeologists presented to the British Museum in London the new findings that were made during the excavations in these ancient Egyptian “Atlantis” in recent years. Among them are several new statues of pharaohs and Egyptian deities, including a six-meter statue of the goddess API, managed the flooding of the Nile, which was installed in the Harbor in these cities like the statue of Christ in Rio de Janeiro or the Colossus of Rhodes.

In addition to the statues, scientists have found in Canopus and Tony-Heraklion many artifacts, gold jewelry, labels and other written records that tell us about the amazing culture of these cities and of Egypt of that time, combining features of ancient Egyptian beliefs and traditions and their Greek counterparts.

Despite more than 15 years of excavations, the reason for leaving these cities under the water remains a mystery to scientists. Many archaeologists attribute the flooding of Canopus and Tony-Heraklion with the earthquake in 796 or 797 ad, which destroyed the Faroese lighthouse at Alexandria, and which could destabilize the soil in the Harbor of Abu Kir and force the city to go under water. It is possible that the answer to this question will be found in the future – today, scientists have unearthed only 5% of the total area of these “Atlantean” of antiquity.