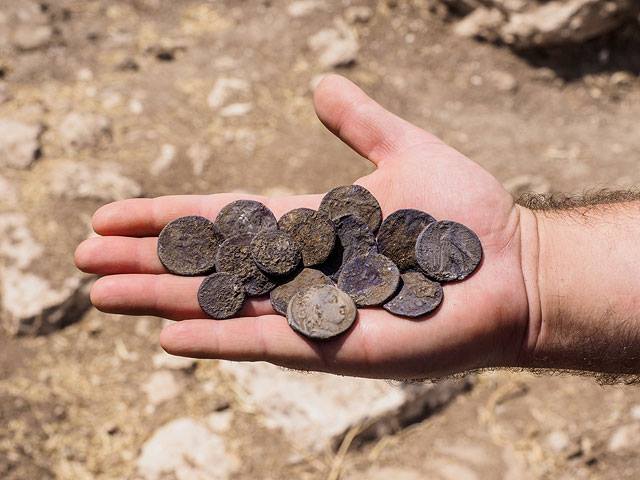 In the course of excavations conducted by the antiquities authority at the construction site of the new town modi’in, archaeologists found the treasure, Dating from the last third of the second century BC It was hidden in the cleft of the rock, near the Hellenistic wall of the estate.

The treasure consists of received tribute money and tetradrachms, minted in tyre, which was then under the rule of the Seleucid Empire. They can see the portraits of two brothers-kings: Antiochus the Seventh and Demetrius the Second. In Judea these coins were called polosatyi and shekels. In the Christian tradition the latter became as silver coins.

In the words of the head of the excavation Abraham Tandler, such treasures are rare. “One of the owners, who spent months saving up silver for some unknown reason, dropped everything and left to get through the hard times. Back he never had. Silver was waiting for us 2140 years!” he says.

A total of 16 coins. The head of the numismatic Department of the Dr. Donald Zvi Ariel notes that they all date back to 135-126 BC In his opinion, this indicates that the owner of the coins can be called a collector, who purposefully picked up a different coin.

Tendler believes that the estate belonged to a Jewish family. On the hills grew olives and grapes in the valley – cereals. The manor house were the mill and warehouses for the storage of olive oil. The walls are built of strong stone, providing residents with protection from the robbers.

Also found bronze coins of a later period with the names and positions of the Jewish rulers. Among them – and the coins of the Great Jewish revolt of the first century ad, indicating that the territory controlled by the rebels. After the capture of Jerusalem the estate remained in Jewish hands.

Its residents are actively preparing for the Bar Kochba revolt 132-135 years BC the Walls were strengthened from the inside with large rocks, dug underground shelters and provided water, supplies and even a mikveh. However, the defeat of the Jews in this uprising put an end to the existence of the farm.