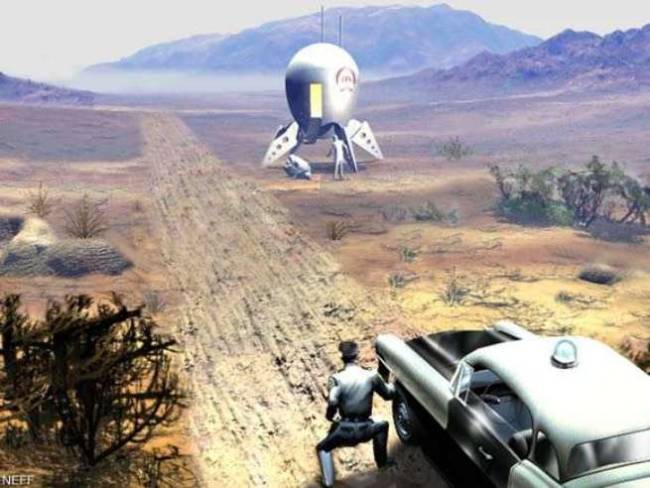 On April 24, 1964, on the outskirts of New Mexico’s Socorro town, an hour’s drive south of Albuquerque, police sergeant Lonnie Zamora was missed on a routine duty. Until the end of the shift, there were still two hours left, and he was even delighted when, from behind the turn, the blue Chevrolet appeared, creaking with tires.

Noting the time -17: 45, Zamora rushed to his police “Ford” for violating the speed limit. The pursuit began on federal highway No. 85. Suddenly, on the side of the motorway, the policeman noticed a flash of flame from the corner of his eye, accompanied by a wheezing roar …

Leaving the black rubber bands on the asphalt, Zamora stopped with a squeal of brakes. With a pitying glance at the rapidly moving offender, Zamora began to look for a source of unusual noise. Looking at the surrounding warehouses, he suddenly thought that something like a warehouse with miners’ dynamite sabers had exploded nearby.

Turning at the intersection leading to the country road, the policeman saw behind the parted storage walls something strange. Against the background of the surrounding hills, an unusual aircraft was maneuvered, enveloped in jets of orange-blue flame. Dimensions at such a distance were difficult to determine, but it was clearly seen that the apparatus, similar to a silver drop with stilts of stilted chassis at the bottom, slowly descends on a narrow cone of smokeless flame. It took no more than a minute, and a strange “jet helicopter,” as Zamora called himself, disappeared behind the nearest hill. 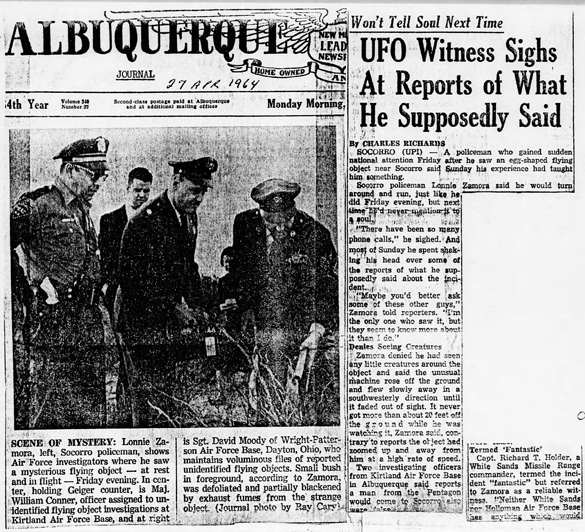 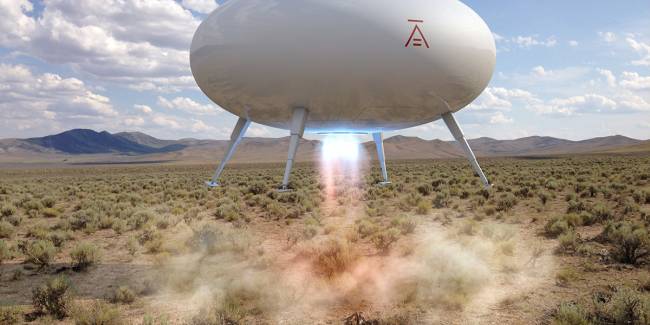 The policeman’s car turned onto a dirt road and, breaking the crest, froze on the opposite slope. Before Zamora opened an amazing picture: a hundred meters “jet helicopter” was going to land. When the device touched its supports of the ground, the whistle passed into a bass humming and fell silent. While Zamora was getting out of the car, he missed the moment when next to the “helicopter” appeared a pair of human figures in something reminiscent of silvery overalls.

From afar they were not unusual, and the policeman reasonably judged that he had witnessed the accident of some experimental apparatus. Zamora rushed to the radiotelephone and began to call for help. The connection was bad, and it took quite a long time to negotiate with the authorities. When he returned to the facility, the “helicopter pilots” had already disappeared.

Sergeant Chavez did not understand much of Zamora’s muddled testimony, which called the UFO something like a jet helicopter, a rocket, or somehow a flying car.

With a wave of his hand on Zamora, who fell into a stupor from emotions, the sergeant ordered to inspect the scene of the incident. Where the policeman saw the helicopter, four deep angular dents were found on the ground. Subsequently, ufologists found out that these traces of UFOs were located at the tops of a quadrilateral, as if consisting of two isosceles triangles with a common base. On the ground, one could also consider four dark spots of soot.

Returning to the police station, the sergeants met there the FBI agent Burns, who was investigating some intricate case of federal significance. He began to ring up familiar aviation experts, and soon Captain Holder from the nearby secret range of aerospace engineering in White Sands joined the police.

All present immediately went to the scene of events. There, the agent Berne together with Captain Holder began to conduct all sorts of metric measurements, including drawing up a plan of the terrain, sketching footprints from the “feet” and “exhaust” of the UFO. In addition, Holder and Chavez made many photographs. Subsequently, some of them were in the police file, and others – in the materials of the investigation of the FBI and the intelligence of the Air Force. A thorough examination of the parking lot of the UFO, conducted by professionals, gave its results.

It turned out that along with traces of the apparatus itself in several places, human traces of strange shoes without heels with a smooth sole are noticeable. In addition, Holder noticed that the depressions from the “supports” of UFOs are not completely symmetrical and one pit is deeper and lies somewhat apart. He immediately expressed his opinion, which later fell into the protocol of inspection, that the apparatus was damaged and made an emergency landing.