UFO’s and the KGB

With the change in political priorities, many documents from the secret archives of the KGB are now in the public domain. But how can they believe? Any employee of the state security confirms: business papers rarely declassified in its original form.

Their pre – “clean” by removing information that the Agency does not want to disclose for whatever reasons. And yet such documents can provide researchers with interesting information – in particular, the problems of aliens and UFOs, which are also involved in our intelligence agencies.

For many years in the Soviet Union operated a dual policy towards unidentified flying objects.

The population explained that UFOs do not exist, it is hostile propaganda. Enthusiasts who spread samizdat materials about UFOs or aliens, were threatened with charges of anti-Soviet agitation. 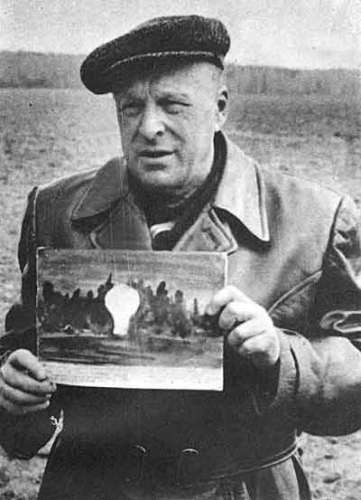 At the same time, many UFO witnesses gave written testimony that was carefully stored and systematized in the KGB archives. That is, in the Department it is assumed that such objects exist and can even threaten the security of the country.

Interesting story associated with the activities of one of the founders of Russian UFOlogy Felix zigel (1920-1988). In November 1967, his statement on television marked the beginning of mass collection of information about UFOs. In the address he created a scientific group for the USSR came several hundred documentary evidence. But the study failed group was dissolved and all its materials are transferred to the KGB.

Igor Sinitsyn, Deputy head of the KGB Andropov, in an interview with “the observer” has told about how I saw in the office of his boss a dossier on the subject of the UFO phenomenon. It happened in 1977 – after the appearance in the sky over Petrozavodsk strange huge object.

Sinitsyna responsibilities included monitoring of publications in the foreign press, so he brought Andropov translation of the article from the magazine “stern” about the case in Petrozavodsk.

The head of the KGB has carefully studied the material, then pulled out of the desktop a blue and offered Sinitsyn to see its contents. In the folder were the reports of the counterintelligence officer about encounters with UFOs. Andropov asked to bring all materials to the Chairman of the military-industrial Commission of the USSR A. P. Kirilenko. He left the documents at home.

After a short time on the order of Andropov’s program was developed, requiring each soldier to report all cases of UFO sightings. The most interesting data came in the “Blue folder”.

In 1991, at the request of cosmonaut Pavel Popovich, the then President of the all-Union UFO Association, “Blue folder” was placed at its disposal. There were 124 pages of printed text: reports, explanatory notes, reports on encounters with unidentified objects.

To shoot down failed

Here are the contents of some documents kept in a mysterious folder.

28 July 1989 the mysterious discs appeared above the warehouses of missile weapons, located North-East of the town of Kapustin Yar in Astrakhan region. Number of military units in the documents smeared with black ink, but left notes of the security officer, who reported on the situation. Soldiers of the transmitting center watched the three objects, and the military base eliminate one.

The UFO consisted of disks with a diameter of 4-5 meters with a hemisphere at the top. They were shining brightly, silently moved, sometimes dropping down and hovering above the ground. Caused by fighter command (the number of the flight is also smeared black ink) was not able to fly up close to any of the objects, they constantly walked away from him. 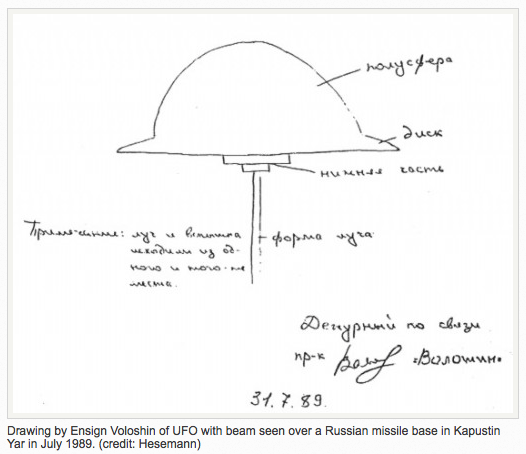 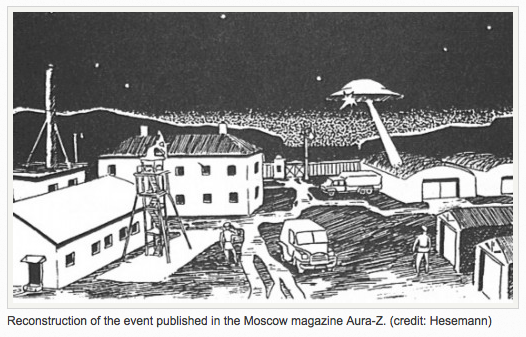 Reports of captain Chernikov, ensign Voloshin, member tisheva and other say that the object gave off signals resembling the flash.

Other documents of the “Blue folder” describes a contact with a UFO that occurred in 1984 over Turkmenistan. The air defense system was seen a spherical object flying along the coast of the Caspian sea at an altitude of 2000 meters and on their way to the state border. To inquiries he never responded. In the air were raised two fighters, but all attempts to shoot down UFO failed. Moreover, when the object began to shoot, he abruptly dropped to 100 metres above ground at the altitude that did not allow fighters to conduct fire on him.

Such cases in the “Blue folder” – a few dozen. These testimonies point to two undeniable facts: first, UFOs existed, and secondly, despite their official denial, the KGB was actively engaged in the collection and systematization of information relating to unidentified flying objects.

Letters from another planet

But the KGB wouldn’t be myself without secrets and hoaxes. One of them Western scholars believe the so-called umetskii letters. In the 1960-1970-ies in Spain (and partially France) different people were sent letters in different languages. Senders were presented by the inhabitants of the planet, Ummo inhabited by rational creatures, arrived on Earth.

The total number of letters amounted to more than 260, its volume has exceeded one thousand typewritten pages. Each page of these documents was marked by a special icon purple color.

In the Epistles “Amity” tells the story of his stay on Earth. They came here in 1950 on the three spacecraft, there are six of them, including two women, they explore and analyze our lives.

French journalist R. Marik, many years studying these letters, I came to the conclusion that their creators were employees of the KGB. His arguments: described in the letters the social system of the planet, Ummo is very similar to advocating communism in the USSR. “Amity” made no secret of sympathy for the political leaders of the Marxist direction. Their views concerning the arms race, strictly follow the classic themes of Soviet propaganda.

But the main thing – in all countries of Europe already existed a legal Communist party, and in Spain the rules of the dictator Franco and the Communists were banned. In 1975 Franco died, to power in the country came to the Christian Democrats, the Communist party became legal. And the flow of letters stopped! “Amity” achieved the desired goal?

The USSR was your alien?

In the West, periodically raises the topic of the downed air defense of the USSR flying saucers of extraterrestrial origin and study the corpse ran her humanoid which has been extensively investigated in the Institute named after Semashko. UFO shot down in 1968 in the Urals near the city of Berezniki. Now all who are interested in UFOlogy, we know that this fact – nothing more than a hoax.

However, a number of magazine and TV interviews on this topic gave US a P. Klimchenkov, introduced himself as a former KGB officer and shown on television your identity.

His words are confirmed by the article from the newspaper “Evening Sverdlovsk”, dated 29 November 1968. It witnesses claimed that, in their eyes, a shiny disc fell on a steep snow-covered slope. Then on a scene there arrived the military and thoroughly combed the area.

Klimchenkov claims that the operation to detect a UFO was code named “the Myth”. Further anatomical dissection of a dead humanoid convinced scientists that he is not human. 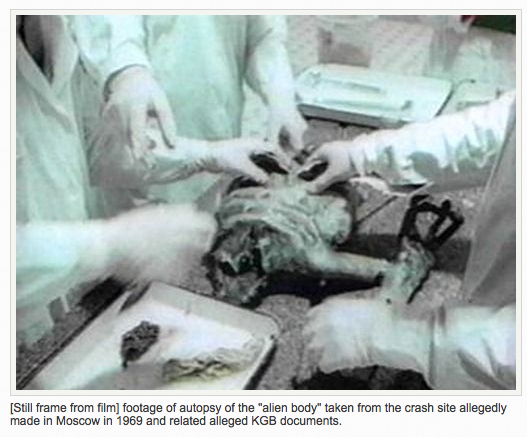 A frame from the video, which allegedly shows the autopsy of an alien physicians KGB

How reliable is this information? No “Blue folder”, or in other published documents of the KGB on it says nothing. But many klimchenkov demonstrated by the documents seem genuine. For example, the orders of Soviet defense Minister Grechko, commander of the Ural military district Ponomarenko that at all stages of the UFO was attended by the KGB.

Their reports, according to Klimchenkov, promptly to the chief of the scientific Department of the KGB Colonel Grigoriev. In the displayed document is called a research institution, which carried out the anatomical autopsy of a humanoid, and the names of doctors – Kamyshov, Savitsky and Gordienko. For whatever reason, they all died on the same day, exactly one week after the completion of the autopsy.

All three were real luminaries of science and the KGB, for all its power, it would be unlikely to deal with the first people domestic medicine. Therefore, the loss of doctors still causes issues.

Some foreign journalists say that leaking information about the activities of the former KGB was intentional. But for what purpose? In response to a similar story about the capture of the UFO and the autopsy of the humanoid in the US? As you know, in 1995, a us media accused the CIA of years concealing this fact, but the official authorities have declared, that capture the UFO was not.

Maybe played the role of the Mercantile interests of former employees of the once formidable Agency? The American TV company TNT does not hide that the documents and videos about the “Soviet alien” was purchased in Russia from retired KGB officers.

The activities of the KGB since overgrown with rumors and legends. And to separate the truth from the controlled misinformation is extremely difficult. In addition, the existence of UFOs continues to affect the interests of state security – and that means that some documents are unlikely to be published.