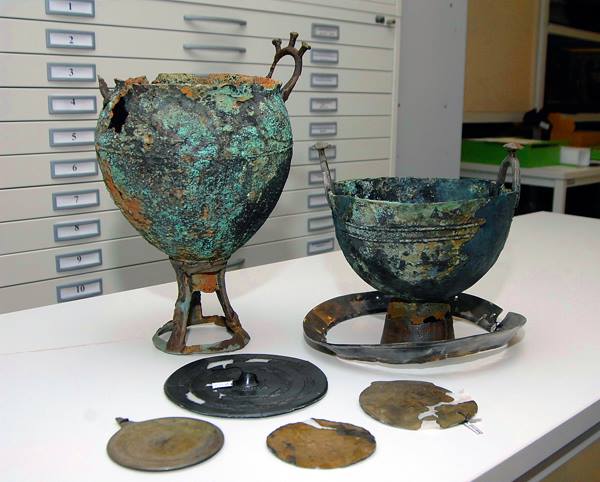 Twenty-five unique finds, a year ago, made Andrew Cheremin accidentally on fishing, will present the main Museum of Yamal in November. This in the Arctic have not yet found!

Andrew, the driver, arrived in Salekhard to work eleven years ago from Yoshkar-Ola. And here, I found a second home, job, family, friends. One of the friends in the autumn of last year he went fishing in the district of Gornoknyazevsk.

– Throwing spinning for pike, but without avail… Biting is not present. Then decided to catch on live bait. Began to dig worms, and a shovel buried in something iron, – says the man.
At first he thought it was a helmet. But a closer look, I realized – a finding not isolated and clearly come from ancient times. The next day brought treasures in MVK them. I. S. Shemanovsky.

– Met with skepticism, but when the hoard was examined by experts, it became clear that things are very ancient and interesting to archeologists, says Andrew Cheremin.

Yes, in the hands of anglers actually got artifacts, Dating from the turn of the eras! That’s two bronze cauldron Scythian type, silver mirror of Sarmatian type and Parthian silver plate.

Now the author of the involuntary opening of a new hobby, want to participate in scientific excavations, has offered its assistance to the archaeologists. And hopes for good luck!
And findings from Gornoknyazevsk fell into the hands of the artist-restorer of MVK Sergey Pitukhina. Hard master, returned the antiquities original appearance, restored mirror. Particularly values the boilers of the Scythian type.

One of them was from the 26 fragments. When I realized that this Scythian objects that began to look for analogues in the Internet by its characteristic handle and the bottom. Perekopa a lot of material, found identical product. It has recreated a copy of the foam, and then picked up the fragments. Part of the boiler is restored artificially, – said Sergey Veniaminovich.

IN THE ARCTIC THIS HAS NOT YET BEEN FOUND!

Yamal archeologists believe that the treasure gornoknyazevsk confirms the widespread trade of the ancient world.

– Things are absolutely amazing. The uniqueness of the treasure in its location. It is almost the most Northern range of such finds, – said a senior researcher of the center for the study of Arctic Andrey Gusev.

Archaeologists examined the luckiest place last fall, and in the summer studied it in more detail. Alas, nothing was found, not even evidence that there may be an archaeological site. 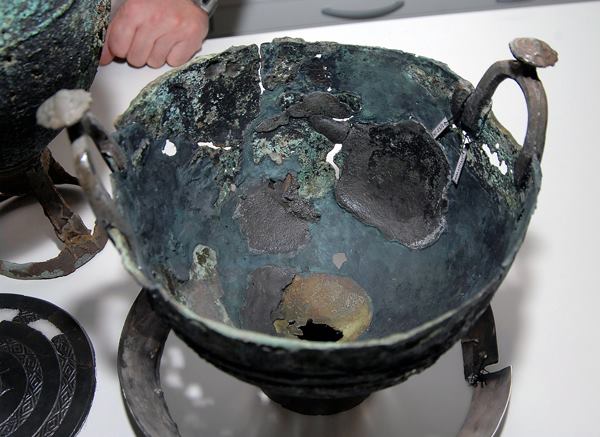 The origin of all 25 artifacts, scientists have attributed to the period of time where “BC” moved into “our era”. At the same bronze cauldrons Scythian type appeared in use somewhat earlier. They were treated very carefully and even repaired.

Are attributes of other cultures, so they were given special status. Not by chance at the sanctuary of “Ust-Poluy” we have found ceramic pots, repeating the shape of the bronze, – said Andrey Gusev.

But if the purpose and origin of boilers no doubt, by two silver clips have any questions. Scientists suggest that they were the upper part of some vessels, perhaps as the rim.

Mirrors reminds one of the Chinese – the Han time. However, scientists with the Japanese colleagues, suggest that this is not the original, but a copy made in southern Siberia. By the way, falling to Western Siberia Sarmatian mirrors change their functionality.

– Many items have engraving in typical Siberian style. They could be applied only in the Ob and the Urals, but not in southern Siberia. In addition, in places where should be attached to the handle, punched holes, and one even had the remains of the cord, that is, these things hung and, apparently, got it on special occasions, – said Andrey.

Stands out among the finds of Parthian and silver plate with the image of a man in Eastern dress. Note that Parthia is one of the superpowers of the ancient world, was located on the territory of North-Eastern Iran and southern Turkmenistan.
Yamal archeologists believe that the content gornoknyazevsk treasure belonged to the staff or respected person, for example, to the leader. Why the owners hid things, we can only guess. Perhaps the reason was some negative event like the RAID enemies.

In General, the findings once again confirm the view of scientists that the turn of the eras is characterized by a powerful surge of activity of the taiga population.

– People are supported very remote barter connection, and things were spread to hundreds and thousands of kilometers from their place of production, – commented Andrey Gusev.
Now scientists are preparing the application to the next Collection of archaeology of the Arctic, which tells of gornoknyazevsk the treasure. Both versions will be released before the end of the year.