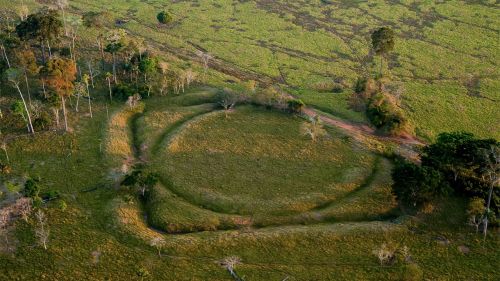 Clearing from the forest a small area of the Amazon jungle, researchers have stumbled upon a mysterious geometric patterns on the ground. Brazilian geoglyphs have been the object of intense study not only of archaeologists but also of ecologists — scientists are trying to understand what the impact of the monuments of ancient architecture have on the environment.

Long before the arrival of Europeans to the territory of modern North and South America, people living in the Western part of Brazil, massacred hundreds of geometric shapes on the ground. These mysterious earthen patterns (you can see them in the picture above) was found near Rio Branco and the Brazilian state of acre. They are called “geoglyphs” are one of the few extant evidence that the Amazon rainforest once existed complex, large community of people.

Long grooves dug in the form of fairly accurate circles and squares, are drawn up to 300 meters in width. Scientists noticed them only after massive deforestation, which is not surprising, given the density of wild tropical vegetation. To determine what impact the geoglyphs had on the environment, a team of scientists has extracted the images of the soil of the two patterns in the Western part of Brazil, and also collected samples of vegetation that covered the find. The analysis revealed that the age of remnants of charcoal from samples ranges from 2300 to 1400 years. It is assumed that to cleanse the land of the ancient builders simply burned forest land.

However, the clearing did not last long. Cost to cut down the land as lush tropical vegetation again began to bloom on the bare earth, so past patterns might be fairly quickly absorbed by the forest. As the team reports in the journal Proceedings of the National Academy of Sciences, in the soil was dominated by traces of bamboo and palm trees, and the ratio of carbon isotopes was inconsistent with tall trees. This suggests that the builders of the Nazca lines were created only a small, temporary areas of bare areas under construction, and no significant effect on the environment, they did not.