Veliky Novgorod archaeologists have uncovered yet another age-old mystery 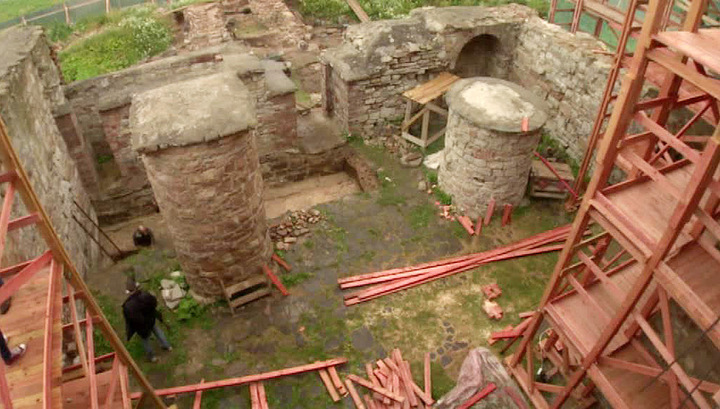 Archaeologists have found fragments of frescoes of the ancient temple in Veliky Novgorod in the Ryurik ancient settlement. It was built in the 12th century. In the 14th it was destroyed and pieces of the wall paintings used to level the floor in the new Church. Now scientists hope to recover at least part of the frescoes.

That on the ruins of the Church of the Annunciation in the Ryurik ancient settlement could be preserved fragments of medieval wall paintings, the archaeologists guessed. Surprise was the number of found fragments and the degree of their preservation.

“Here we see a fresco fragment in the profile, another green, and another” — shows the find Alexey Andrienko, head of the Department of the study of the archaeological collections of the Novgorod Museum-reserve. “While even the exact number of fragments that were raised this year from the excavations, it is unclear from this place. We only know that 149 of tablets, no, 150 collected. And quite the job”.

From the ancient Annunciation Cathedral leaving only the contours of the Foundation. Bright frescoes have survived only because in the 14th century the Novgorodians, destroying the old temple in its place built a new, and small fragments of painted plaster used to level the floor.

“The walls of the Annunciation Church is 14th century. Discovered frescoes belonged to the temple built in the year 1103. His Foundation is now cleaned from the layer of the earth. And initially it was a majestic building, comparable to the volume of the St. George Cathedral of the Yuriev monastery on the opposite Bank of the Volkhov,” the happy Aleksey Andriyenko.

And extant St. George Church, and destroyed the Annunciation at the size and luxury of the decoration was second only to the Cathedral of St. Sophia. Here, by the way, the frescoes of the 11th century have been preserved and give an idea of how could look the Church of the Annunciation inside. Restorers are already trying to put together a newfound historical puzzle together. Here, a few pieces of colored plaster, moved in together, showed part of the wing of an angel.

“Forty fragments are collected here. Small, big, all sorts. They lay in the earth next, but it is still huddled separately, although we found. I hope that in the future something else will appear,” says Tamara Anisimova, the head of the center for restoration of monumental painting of Novgorod Museum-reserve. “This is the head of an angel, tied up, with a separate strand. We understand that this is a delicate painting on wet, which means “fresco” in Italian”.

Scientists believe, Prince Mstislav the Great, who ordered to build the Cathedral, was summoned to Novgorod the best architects and painters of the beginning of the 12th century. It is possible that even from outside Russia.

“The first buildings of Russia. Huge, monumental, attesting to the high ambition of these princes, some kind of awareness of their role, that they are still in life wanted to be famous” — describes the discovery of Vladimir V. Sedov, senior researcher of the Institute of archaeology RAS, corresponding member of the Russian Academy of Sciences.

Until late summer of 2017 participants of the expedition on the Rurik settlement plan to clear the foundations of the ancient Church of the Annunciation, and the preserved ruins of the 14th century to cover with a glass dome to preserve the monuments of architecture.