Viracocha: the secret of the white God 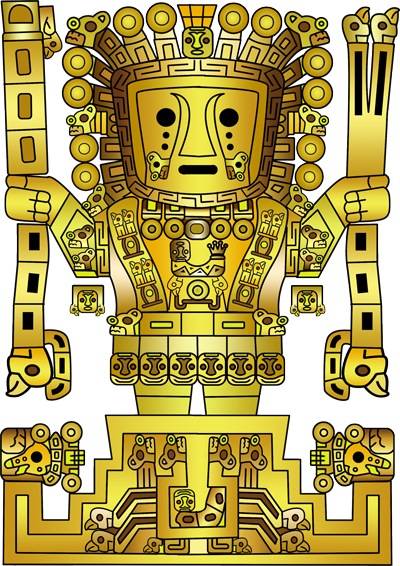 Viracocha was considered the ancestor, forefather of all people and the Creator of the world. According to a variant of the cosmogonic myth, Viracocha created in lake Titicaca the sun, moon and stars.

He then with the help of two younger Viracocha made of stone human figures and in their likeness made man, assigning to each tribe its own area.

Viracocha and his aides have been held throughout the country, causing people from the ground, from rivers, lakes, caves. People repopulating the earth, Viracocha had sailed to the West.

The theme of the white gods of the American Indians troubled scientists ever since, as they met with the sacred books of various peoples of the New world, where different terms clearly defined role of certain media culture and knowledge came to the New world from across the sea.

In the West the topic has fascinated Graham Hancock. Here are the main conclusions of the scientist and writer from the book footprints of the gods:

— The time of the arrival of the Spanish conquistadors, the Inca Empire stretched along the Pacific coast and the highlands of the Cordilleras from the present Northern border of Ecuador throughout Peru and reached in the South of the Maule river in Central Chile.

Remote corners of the Empire were connected by a long and an extensive network of roads to be treated, for example, two parallel highways North—South, one of which lasted for 3600 km along the coast, and the other, of the same length, through the Andes. Both of these great highways were paved and were joined by a large number of cross roads.

A curious feature of their engineering equipment was suspended bridges hewn in the rocks and tunnels. They were clearly the product of a developed, disciplined and ambitious society.

The capital of the Empire was the city of Cusco, whose name in the local language of Quechua means the navel of the earth. According to legend, it was founded by Manco Capac and Mama Oklo, the two children of the Sun. Moreover, although the Incas worshipped the Sun-God of Inga, the most revered deity was Viracocha, whose namesakes were considered by the authors of the Nazca lines, and its very name means sea foam.

No historian, however, is unable to say how ancient was the cult of this deity to the time when the Spaniards put an end to it. The impression is that he has always existed anyway, long before the Incas incorporated him into their Pantheon and built dedicated to him a magnificent Church in Cusco, there was evidence that the Great God Viracocha was worshiped by all civilizations in the long history of Peru.

In the early sixteenth century, before the Spaniards took control of the destruction of Peruvian culture, in the Holy temple of coricancha was the image of Viracocha. According to the text of the time, Anonymous description of the ancient customs of the natives of Peru, the marble statue of the deity hairstyle, body type, facial features, clothes and sandals is more reminiscent of St. Bartholomew’s — so, as it is traditionally portrayed by artists.

Other descriptions of Viracocha resembled St. Thomas. Therefore, it could be anyone, not an American Indian, because they have relatively dark skin and sparse facial hair. Thick beard and light skin Viracocha probably suggests its non-us origin.

Who was the prototype of Viracocha? Through the many legends of the peoples of the Andean region is a mysterious figure of light-skinned, bearded old man. Although in different places he was known under different names, everywhere it is possible to know one person — Tiki Viracocha, Sea Foam, a connoisseur of science and magician, winner of the terrible weapon that came to restless, even antediluvian times to bring in the world order:

There suddenly appeared, coming from the South, the white man is tall and imperious behavior. He had such great power that turned the hills into the valleys, and the valleys to high hills, made streams flow from rocks…

The Spanish chronicler who recorded this legend, explains that he heard it from the Indians, with whom he traveled in the Andes:

They heard it from their fathers who in turn learned about it from the songs that came from ancient times… They say the man drove across the mountains to the North, making towards wonders, and that they never saw.

They say that in many places he taught the people how to live, while talking to them with great love and kindness, encouraging them to be good and not to hurt or damage each other, but to love one another and show mercy to all. In most places, they called him Tiki Viracocha…

Also known as Kon-Tiki, Thunupa, Tupac, Tupac, will. He was a scientist, a consummate architect, sculptor and engineer.

On the steep slopes of the gorges he arranged terraces and fields, and their supporting walls. He also built irrigation channels… and went in different directions, doing many different things.

In his corpus of legends of the Incas, the Spanish chronicler of the XVI century Juan de Betanzos says, for example, that, according to the Indians, Viracocha was a tall bearded man, dressed in a long white shirt to the floor, girded at the waist.

— Claim that Viracocha was the beginning of a Golden age which later generations have remembered with nostalgia, ” continues G. Hancock. — And all the legends agree that he carried out his civilizing work with great kindness and, if possible, avoided the use of force: a benevolent teachings and personal example — here are the main methods, which he used to arm people with techniques and knowledge necessary for cultural and productive life.

He especially credited that he implemented in Peru, medicine, metallurgy, agriculture, animal husbandry, writing (later, according to the Inca, forgotten) and understanding of the complex fundamentals of engineering and construction.

I was immediately impressed by the high quality of the Inca stonework in Cusco. However, as I continued my research in this old town, I was surprised to see that not always the so-called masonry of the Incas performed by them. They really were masters of working stone, and many monuments of Cuzco, indeed, their handiwork.

However, it seems that a part of the wonderful buildings, attributed according to tradition, the Incas could have built the earlier civilizations, there is reason to believe that the Incas often acted as conservators, not of the first builders.

As for the highly developed system of roads connecting distant parts of the Inca Empire, they, as it is known, is parallel highways running North to South, one parallel to the coast, the other through the Andes: more than 20 thousand km of surfaced roads.

But the fact that it is not their Incas built it, they only repaired coating, keeping them in good form. And no one still couldn’t reliably date the age of these amazing roads, not to mention the authorship…

They say it was some red-haired people are of two kinds, true warriors (maminka) and shining (yaypan).

To us remains nothing how to appeal to tradition, preserved by the chronicler Jose de Acosta in his Natural and moral history of Indians:

They mention a lot of the flood that happened in their country… the Indians say that all men are drowned in this flood. But out of lake Titicaca came one Viracocha, who first settled in Tiahuanaco, where at this day one can see ruins of ancient and very strange buildings, and from there I went to Cuzco, with which it began the multiplication of the human race…

Great God Creator, Viracocha decided to create a world where we could live. First he created the earth and the sky. Then took the people for what was cut down from the stone giants, which then revived. All went well at first, but after a while the giants are at loggerheads and refused to work. Viracocha decided that he must destroy them. Some, it turned into stone… the rest he destroyed in the great flood.

Very similar to the revelation of the old Testament. So, in the sixth Chapter of the Bible (Genesis) describes how the Jewish God is dissatisfied with his creation, decided to destroy it. And intriguing sounds here of the phrase: In those times on earth lived the giants… Could there be any connection between the giants, who have yet to discover in the biblical Sands of the Middle East, and the giants from the legends of pre-Columbian Indians?

And here we have the labor Garcilaso de La VEGA, son of Spanish aristocrat and women from the family of the ruler of the Incas History of the Incas, ” continued Hancock. — He was considered one of the most reliable chroniclers and the Keeper of the traditions of the people to which belonged to his mother.

He worked in the XVI century, soon after the conquest, when those traditions had not yet been clouded by alien influences. He is also quoted as saying that he believed deeply and with conviction:

After the flood receded, in the country of Tiahuanaco appeared a man…

That man had been Viracocha. Wrapped in the cloak, strong, noble appearance, he walked with unassailable confidence through the most dangerous places. He performed miracles of healing and could call down fire from heaven. To the Indians it seemed that he appeared out of nowhere.

In the story of Viracocha viewed interesting Parallels with the myth of the vicissitudes of Osiris, the ancient Egyptian God of death and resurrection. Most fully this myth is contained in Plutarch, who says that this mysterious person brought to his people the gifts of civilization, taught him many useful crafts, committed cannibalism and human sacrifice and introduced the first code of laws.

Despite considerable differences between the legends, the Egyptian Osiris and the South American Thunupa-Viracocha have, oddly enough, the following common features were both great educators against both organized conspiracy were both slain by the conspirators were both hidden in a receptacle or container both thrown into the water, both floated down the river both eventually reached the sea.

Does it — again! — on a single of the antediluvian world, which Atlantic was not an insurmountable obstacle and in which social, economic and ethno-cultural communication was carried out much more intensively than we can imagine? And Viracocha was one of the messengers and workers of the world, disappeared forever, but left mysterious footprints.