What caused the deadly eruption of a volcano? 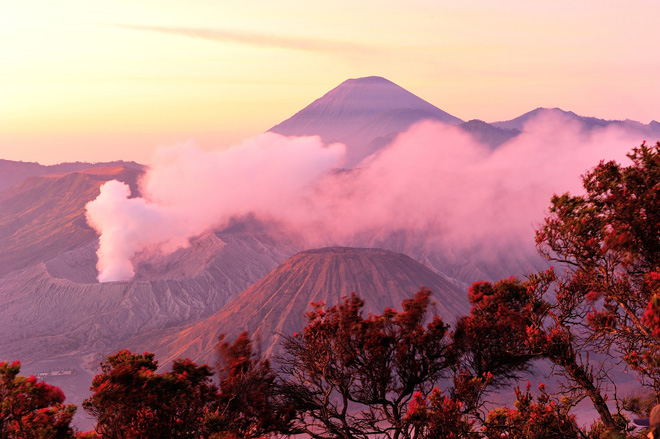 The largest volcanic eruption in the history of humanity has killed 60 % of the inhabitants of the Earth. When the Indonesian SUPERVOLCANO Toba exploded about 74 thousand years ago, in the atmosphere were 2.8 thousand cubic kilometers of ash. Ash rains in most parts of Indonesia and India. Recently, researchers have discovered new clues about what could cause megaspirea, and will now be able to predict the same event if it ever happens. The secret of the volcano revealed through geochemical structure of volcanic quartz crystals.

Scientists have long argued, formed a huge volume of magma Stopping, and that caused the magma to erupt in such an intensive way. A team of researchers from Uppsala University (Sweden) together with international colleagues have found a solution to the issue within millimetric crystals of volcanic ash and rocks.

“Quartz crystals grow in the magma, record the chemical and thermodynamic changes in the magmatic system before the eruption as well as the rings of trees record climate change,” says Dr. David Budd. “When conditions change in magma, the crystals react and grow. The growth record of these changes. The problem is that each magmatic analogue of the rings of the tree — just a few micrometers in diameter, that’s why they are very difficult to analyze”.

The researchers studied quartz crystals Toba and found a clear shift in isotopic composition at the outer edge of the crystals. The outer zone of the crystals contains a relatively low proportion of heavy isotope 18O compared to 16O easy. This indicates that the magmatic system that is much changed right in front of the strongest eruption.

The origin of this chemical signature is explained as follows: the magma melted and merged with the huge amount of local rocks, which is also relatively low ratio of 18O to 16O. This type of rock often contains a lot of water, which could fall into the magma and produce steam, creating, thus, increased gas pressure in the magma chamber. The gas pressure eventually allowed the magma to break through its covering the crust and flow outward.

Fortunately, the cataclysmic super eruption occur very rarely. “The last super eruption of Toba, which occurred 74 thousand years ago, is the largest terrestrial volcanic eruption of the Pleistocene,” the researchers say. “Then the volcano spewed a huge volume of substance volume from 2.8 to 5.3 thousand cubic km.”

To learn what is happening with the volcano, the group developed a model based on seismic information. Using it, scientists have discovered that the SUPERVOLCANO operate a huge dense reservoirs of magma. Magma in these reservoirs is stored under the thick peel, until you save up enough pressure to cause an eruption. The new model showed a complex multi-level system of tunnels of magma, which reaches depths of over 150 km At a depth of about 150 km of produced gases and base alloy and the molten rock low in silica. These alloys then reach depths of nearly 75 km, creating a huge reservoir of magma.

Toba is not the only volcano where the magma reservoir is under the ground. The same structure exists under Yellowstone in the heart of North-West America. In April 2015, tracing the seismic waves, geophysicists have discovered a huge secondary chamber even deeper beneath the earth. It is so large that it partially melted rock could fill the Grand Canyon 11 times. If you explode the Yellowstone SUPERVOLCANO, the eruption would be a thousand times more powerful than the eruption of mount St. Helens in 1980. While the giant sleeps 70 thousand years, the scientists say that to exclude the possibility of its revival is impossible.

New research shows that stopping dense magma in reservoirs beneath the upper cortex may be a key reason why between eruptions of supervolcanoes such long periods. Only when the reservoir of magma reaches a critical level of overload of pressure due to gases and alloys, it is emptied and a huge volume of magma begins to rise up through the crust.