What is hidden behind the curse of the island of Lokrum 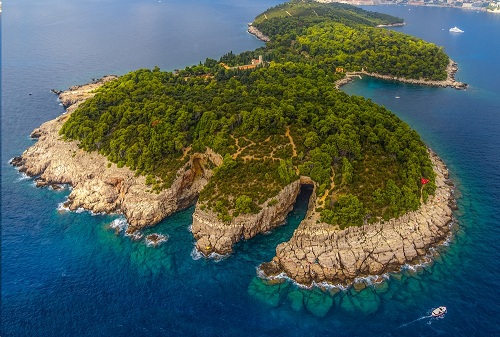 A small island in the Adriatic Sea located in close proximity to the famous city of Dubrovnik, Croatia. This wonderful place is almost deserted. Only a few peacocks live permanently. Why? According to legend, great misfortunes will befall those who want to live on the island or spend too much time there.

This mysterious story begins in 1023. A terrible fire devastated the city of Dubrovnik. Its inhabitants have vowed to build the monastery of St. Benedict if the city is preserved. The fire went out almost instantly. Grateful residents of Dubrovnik built a monastery and a church dedicated to the Virgin Mary on the island of Lokrum.

The Archbishop of Dubrovnik, who lost his home in the city, moved to live in a monastery. It was richly decorated and furnished. Centuries later, a general of the Napoleonic army ordered the closure of the monastery and the exile of the Benedictine monks. The warrior clearly intended to take possession of the island. Three aristocrats from Dubrovnik helped the general in this godless business.

The monks were discouraged. They did not want to leave the place where they had lived for centuries. After all attempts at negotiations had failed, the holy people held the last mass. Dressed in cloaks, the Benedictines performed a most curious ritual. As if intending to impose a curse, the monks turned the lit candles upside down, directing the fire into the ground to leave a trail of molten wax.

The procession circled the island three times. Their songs were strange, promising great misfortune to all who dared to take possession of this place. Lokrum’s curse worked very quickly. One of the aristocrats, helping the French general to expel the monks, threw himself out of the window, another drowned in the sea, the latter was killed by a servant.

Captain Tomashevich was known as an extremely rich man. However, soon after he bought Lokrum, bankruptcy fell on the gallant officer. The island had to be sold. The new owner was Archduke Maximilian, the younger brother of the Austrian Emperor Francis Joseph I.

In 1859, the Austrian ship Triton ran aground in the Lokrum Canal. After the disaster, only one survivor was found – a prisoner languishing in the hold of the ship. The whirlwind and waves threw the shackled man to the shore, the rest of the team was killed.

Maximilian accidentally found out about Lokrum in 1859 while investigating the wreck of the ship “Triton”. He was going to honor the memory of the victims, it was then that he first set foot on the island. I saw an ancient Benedictine monastery of the XI century, damaged during the earthquake of 1667, was impressed by the silence of a dense, fragrant forest. This is how the decision to acquire a beautiful place appeared, turning the monastery into a summer mansion.

On May 28, 1864, according to supporters of the action of higher powers, the Benedictine curse sent Maximilian to Mexico. He remained there for three years before being captured by the soldiers of the rebel General Juarez. The Archduke was executed, and the island was offered to the Dubrovnik District for a ridiculous sum of 20,000 silver coins. However, for a long time no one wanted to buy it.

Finally, the willing person appeared. He was a nobleman from an Italian family. Someone Dujmovic de Police, from Vienna. Shortly after the Italian bought the island, he faced major financial problems. I had to quickly sell the property. Lokrum was acquired by Dr. Yakopovich, who was in charge of some of the affairs of Emperor Francis Joseph I.

It was discovered shortly after the deal was made that everything had been done illegally. Yakupovich himself turned out to be a hairdresser who forged the documents of a doctor of forensic sciences. He was expelled from high society, rejected by friends and the worldly circle, virtually destroyed. The heir was the nephew of the swindler, who did not even have time to visit the island, drowning on the way.

Rudolph, the only son of Emperor Francis Joseph I and Empress Elizabeth of Bavaria, indirectly inherited the island, settling on it. The prince invited his wife Stephanie to Lokrum. They stayed there for some time, enjoying nature and wonderful landscapes. Soon Rudolph fell in love with the beautiful Maria Vecher. In Mayerling’s palace, they committed a sensational double suicide, which is still shrouded in many secrets.

Empress Elizabeth (1837-1898), frightened by the tales of the curse, decided that the royal family should get rid of the island. Before leaving for Corfu, she offered it to the Benedictines in the hope that the curse would be lifted. However, the monks adhered to the vow made by their brothers earlier: they will never return to this island, rejecting all offers of the royal court. The emperor’s family, which had already lost two representatives, transferred money to the Dominicans in Dubrovnik to acquire the ill-fated place.

So the sale of Lokrum was announced at auction. Bishop Josip Juraj Strossmayer came up with an offer of 30,000 forints for his client – Mihovil Pavlinovich. An urgent telegram ordered the auction to be stopped. It said that “someone from the court of the emperor wants to buy Lokrum.” This was the granddaughter of Francis Joseph I – Princess Elizabeth Windischgrathz.

The deal took place on October 1, 1879. Five years later, on May 27, 1888, the island was registered in the name of the princess. Shortly thereafter, Elizabeth was assassinated by the Italian anarchist Luccini.

All these countless stories are just fragments of the many tales that surround Lokrum. Superstitions were so widespread that there were no more Benedictine contenders for the island. People’s imaginations were constantly supplemented by legends. This is facilitated by the fact that in bad weather the caves of the island emit menacing, frightening echoes.

And there were reasons for this. According to the Dubrovnik archives, in the Middle Ages, criminals were thrown into the sea, from the top of the Lokrum cliffs. The famous legend tells how the ship of Richard the Lionheart literally fell apart, being wiped out among the rocks of the ominous island.

Today Lokrum is under the protection of UNESCO. It is a quiet and beautiful stretch of land where excursions for tourists are held. It is possible that all the dark legends were invented in order to keep the interest in the historical place alive.