What the aborigines eat cook? 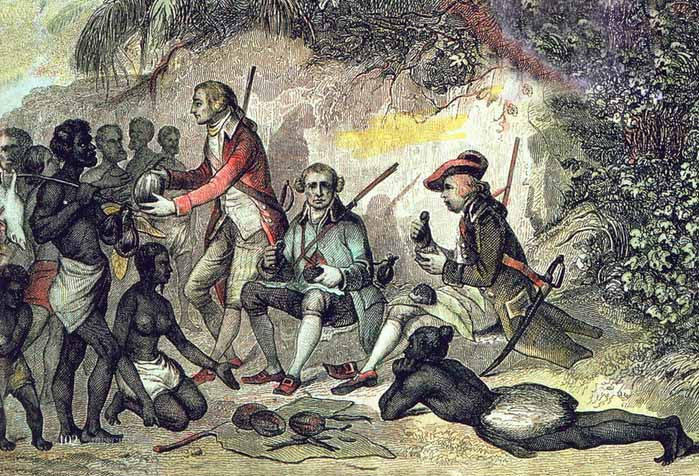 On James Cook we have learned primarily from Vysotsky’s songs, in which there is the perennial question: “what the aborigines eat cook?”. They wouldn’t eat it, really. And what happened to him? Let’s face it.

Ships cook came out from the English port of Plymouth in 1776 the objective of the expedition was to find the Northwest passage between the Pacific and Atlantic oceans.

Cook went around the Cape of Good hope, crossed the Indian ocean and visited New Zealand and Tahiti.

British Parliament promised the ship’s crew, which will make the opening – a £ 20,000 – a fortune in those days.

At dawn on 18 January 1778, cook saw the land: it was Hawaii. The ships dropped anchor in the Bay of Waimea Kauai. On the shore was a big noisy crowd of Hawaiians.

Some have argued that sail is a huge stingrays. Others said that the mast is growing in the ocean, the trees.

The shaman declared that the ships of this venerated altars of the God Lono. In the end, the Governor decided to send their representatives to the Board.

When they boarded the ship, he nearly went mad with excitement: they took the English cocked hats of officers for the triangular head. One of the high chiefs, who rise on the side, cook gave the dagger.

The impression was so strong that the leader announced the new name of his daughter – Dagger.

The team needed supplies of water and food, and cook ordered the Lieutenant John Williamson to an expedition ashore.

Later that day, cook decided to go ashore myself, and walked in the middle of the island unarmed. Those welcomed him as the highest leader. They fell prostrate on the ground at his approach and offered him a gift of food, mats and KAPA (bark material from trees).

The shaman was in hesitation to take the foreigners to the gods or mere mortals? In the end, he decided to make a simple check: offered to strangers women.

If the British agree, they’re definitely not gods, but mere mortals. The British, of course, failed the exam, but many Hawaiians still doubted.

The crowd of women upset cook, who knew that many ships have suffered sexually transmitted diseases. He ordered all the patients to remain on Board, but this measure was unsuccessful, because women have to deliver directly on Board. There is little doubt what team cook has brought to Hawaii syphilis and gonorrhea.

The account book of the ship “resolution” contains the names of 66 sailors out of a crew of 112, which was treated for venereal disease during the voyage.

A year after cook’s visit, the disease has spread throughout the Islands and became one of the main reasons for the sharp reduction of the birth rate.

In late November 1778, cook returned to Hawaii. It was there that the chain of unfortunate events led to his death. Usually on other Islands, cook was greeted as the main leader of another tribe.

In Hawaii it took for the God Lono. Ancient legends have foretold that the Bosom is back on the floating island. Both of cook’s visit occurred in the holiday season of Lono.

For seven weeks cook explored the coast of the island, and then anchored in the Bay of Kealakekua the big island of Hawaii.

The choice of this Bay even more convinced the Hawaiians that cook is the embodiment of the God Lono, – according to legend, it was here that the Fold was last seen. Hundreds of Hawaiians rushed to welcome the return of Lono. They showered the British with all sorts of gifts on Board was always a lot of women.

After some time came aboard, Kalaniopuu, the ruler of the island of Hawaii. He generously gave cook the food and all sorts of gifts.

As ships were repaired and restocked food, some Hawaiians has been further strengthened in the opinion that the British were not gods, but mere mortals.

Because foreigners were richly loaded with food court, the Hawaiians thought that they left their country because of hunger.

They politely hinted to the sailors that it was time to know and honor, and that they will be able to visit the Islands during the next harvest time will be a lot of food.

4 Feb 1779, four weeks after the occurrence of ships in the Gulf of Kealakekua, cook was ordered to raise the anchor. Hawaiians with satisfaction watched the departure of the British.

However, the first night the ships caught in a storm and the front mast “resolution” is cracking. Had to go back. Cook knew only one convenient Bay near Kealakekua.

When the ships came into a familiar Bay, its shores were deserted. Sent ashore the lifeboat returned with the news that Kalaniopuu imposed a taboo on the whole Bay.

Such taboos were common in Hawaii. Usually after the earth and its resources are fairly used, the leaders were banned from entering for a time, to give the opportunity to recover marine and land resources.

The British felt the growing anxiety, but they had to repair the mast. The next day the Bay was visited by the ruler and the friendly welcome of the British, but the mood of the Hawaiians has changed, the original warmth of the relations gradually thawed. In one case, the matter almost came to clashes, when the leaders ordered the Hawaiians to help the team, descended on the beach in the water.

At dawn the next day the British discovered that the boat Shuttle “discovery” has disappeared – the Hawaiians managed to steal her right from under the noses of the watch of the sailor.

Cook was furious – this boat was the best of those that were on Board. He ordered to block the Bay, no canoes could not get out of it.

Cook took a shotgun, Lieutenant Phillips, and nine Marines went ashore to meet with the ruler of Kalaniopuu.

He was going to use the plan, which never failed him under similar circumstances in other places: he will invite the ruler to the plank and hold it there for as long as his subjects do not return the boat.

At seven in the morning cook companions made it to shore; two boats left to wait at the shore. Cook considered himself a friend of the Hawaiians, who had nothing to fear. Cook entered the house and spoke about the loss with an aging ruler.

As it turned out, he knew nothing about the boat, but cook still decided to bring his plan into execution, and invited the Governor to spend the day on Board the ship. Kalaniopuu gladly agreed.

However, his wife and some of the leaders didn’t want the Governor went to the ship; the crowd quickly grew.

At this time over the Bay reverberated the echoes of gunfire; the Hawaiians visibly alarmed. Cook already knew that to bring the ruler to the ship will not succeed.

He got up and went to the boat. At this point in the excited crowd rushed in Hawaiian and shouted that the British killed the high chieftain, when he tried to leave the Bay in his canoe.

It was a Declaration of war. Women and children disappeared. Men wearing wicker armor, in his hands appeared a weapon. One of the soldiers approached the cook, and swung at him with a dagger. Cook cocked it and fired.

Small-calibre bullet stuck in the protective cloak of a warrior. He triumphantly turned to the tribesmen to show that intact. Now even the most timid decided to attack the man they considered God. According to one of the Englishmen, that morning on the shore going from 22 to 32 thousand armed Hawaiians.

Cook retreated to the water. Another warrior with a dagger attacked him. Cooke quickly fired, but missed and killed another Hawaiian. Kick butt Phillips knocked down one assailant and shot the other.

At this point, the Marines lined up on the Bank and fired a volley into the crowd. The crew in the boats also opened fire.

Cooke went knee-deep into the water and turned to beckon the boat and order a cease fire. In this moment his head struck a crushing blow to wooden batons.

When he fell, the other soldier stabbed him with a dagger in the back. An hour after cook went ashore he was dead. Hawaiians rushed to him, firing arrows and attacked with daggers already dead body.

Four of the nine sailors cook died, the rest hurried away to the boats. After that stones flew.

The sailors on Board the “resolution” saw the battle on the shore and fired twice from a gun. A short time later on the shore no one left; the bodies were also carried away. To assume command of the officers decided to take located on the shores of the mast and sails of the resolution and return the bodies of cook and four sailors.

On the shore there was a truce, the sails, the mast and instruments were brought on Board the “resolution,” and Lieutenant king tried to persuade the Hawaiians to return the bodies of the fallen. Night to “resolution” stuck boat Hawaiians and those boarded.

In their hands a small bundle, wrapped in Tapa. They solemnly turned him around and the British were horrified to see the bloody meat that was obviously cut from the body of cook.

The British were horrified by this treatment of the body of his captain, some began to suspect the Hawaiians cannibals.

In fact, with the remains of the cook, the Hawaiians had done so, as did the bodies of the high chiefs. According to tradition, the flesh is highly esteemed people, the Hawaiians were separated from the bone. Then the bones were tied together and were secretly buried, so no one can abuse them.

If the deceased was the object of great affection and respect, then the bones could be kept at home. Because cook has held great respect, parts of his body were divided between the high chiefs.

His head went to the king, and took the scalp of one of the leaders. Terrible the treatment was, thus, the highest honour.

The British did not know this and over the next several days brutally avenged. King, who had to finish the track log to cook, and who was ill at the time, later wrote an apology: “If I could personally attend, I might have found the means to save the tiny nation from destruction.”

One result of this bloodshed was that scared Hawaiians decided to return for more the remains of the cook. One of the leaders, dressed in a ceremonial cloak of red feathers, back of the hand, the skull, arm and leg bones of the captain.

On the evening of 21 February 1779, cook’s remains were sewn up in sailcloth and after the funeral prayer, lowered into the water of the Bay. The crew lowered the British flag and gave a salute of ten guns.

Many of the sailors and Marines on the decks of both ships were openly crying. The next morning, the British hoisted the sails and left the island.

However, the story did not end there – in may 1823 the Hawaiian king Kamehameha II arrived with his wife and entourage in the UK, where three months later he died. Shortly before his death he gave the doctors the arrow with iron tip and wooden tail. King said that the bone in the middle of the arrow is a bone-white man named James cook.

In 1886 the arrow moved from London to Australia, where it was stored until recently. So it would be all forgotten if not for the President of the society of captain cook cliff Trenton, who decided to verify the authenticity of the arrows. Many things have caused historians doubt: arrow has been similar to those used by the natives of Hawaii at the time.

Recently K. Thornton announced that according to DNA analysis, the arrow is irrelevant to cook has. So died, this beautiful legend.