What was stored in the Pandora’s box? 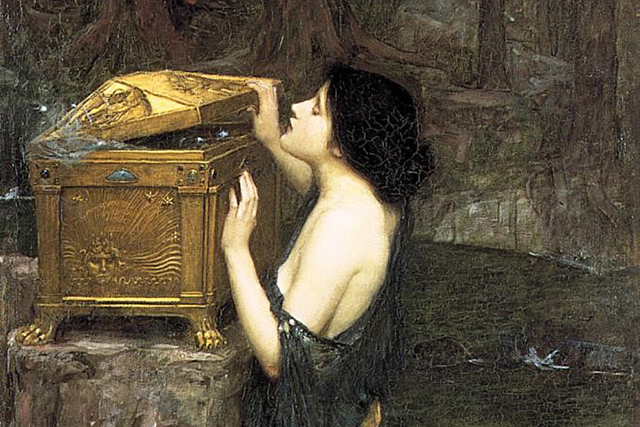 In the ancient Greek myth, as in the narrative formed in the pre-written epoch, a special device is built in, with the help of which anyone who rewrites or retells this myth must first give out its location in time and space. So we, retelling the content of the myth of Pandora, should determine the position of the narrator and his – my – audience. So, why do we find it important to learn some details about the myth of Pandora?

Unfortunately, we will not like the answer. We still live in the era of transition from patriarchy, from the so-called traditional values ​​- the right of the strong, the rule of the mass man, the cult of development and the expansion of human presence in nature and space – to values ​​of humanistic, to respect for the weak, persecuted, poor and sick; Mutual respect not on the basis of strength, but on the basis of humanity, to the expansion of rights and human opportunities for the expelled. 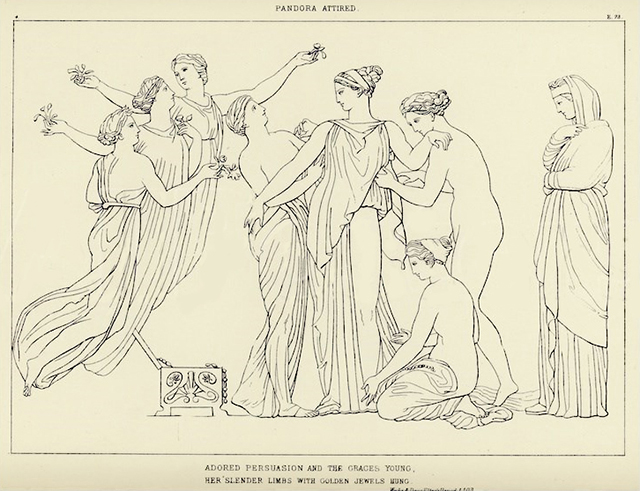 The Myth of Pandora

It is believed that the myth of Pandora is a very late revision of some Oriental legends that made such a strong impression on Hesiod that he decided to enchant the main tradition of the Greeks – the origin of the world – in the myth of Pandora. And he comes up with a fairy tale about “beautiful evil”, or κακὸν καλόν, embodied in Pandora.

Because of the eternal gods inhabiting the houses of Olympus,

Each of his gifts has been added to the bountiful men to perish.

A cunning, pernicious plan that leading to fulfillment,

To the glorious Argobyce, the immortal messenger, his gift

The parent told the Epimetheus to take …

Why compare this innovation of Hesiod, bordering on falsification? Imagine that someone, intent on describing the problems of modern society, suddenly declares that the fashion industry and sex services are to blame: the fashion industry created mannequins, from which the deadly cult of super-fine mannequins grew, and the other learned to produce inflatable rubber women for psychosomatic exercises Rich, allegedly afraid of connections with these women. Interesting, but not too convincing. 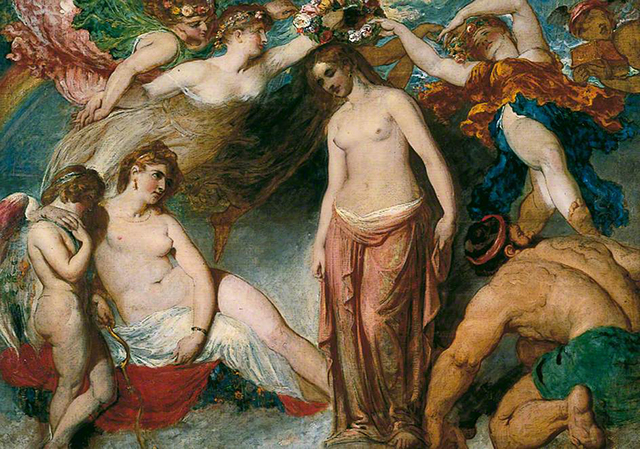 So, Pandora was not born on her own. As well as another woman familiar to us from Hebrew mythology, and this woman was fashioned by order of the supreme deity – especially to seduce either the very first, or the cleverest person, or the newly conquered deity.

God, who created Adam without a special plan, considered himself forced to finalize the project. Thus the first woman appeared, except for Lilith, Eva. A Greek Zeus was going to take revenge on the titan Prometheus for stealing fire for people (men) and ordered his gifted son Hephaestus to create a being that would put limits to the almost infinite possibilities of man.

He achieved his due to two tricks. The first, the effectiveness of which was confirmed during the Trojan War, forever interrupted the relationship between gods and people, is the incredible beauty of a woman. It should be remembered that Hephaestus was the consort of Aphrodite – jealous, but also appreciated by his most beautiful goddess – his father’s aunt. Therefore, in Pandora, Hephaestus, the grand-nephew of his wife, invested not only his entire passion for Aphrodite, but also all his jealousy for his wife.

The charm of Pandora, awakening in an obtuse tribe of men an irresistible and unquenchable lust, was copied in some way by the mother of Hephaestus, who knew how to distract the father of the gods and people from any arbitrarily exciting business.

However, even this property would be tolerated and it would not be worth the world of men any special costs, if only the woman worked by Hephaestus observed certain rules. Instead, and unlike Helen the Beautiful, hatched from an egg that Leda brought down, Pandora was endowed with four vices: laziness, curiosity, jealousy and vindictiveness.

Obviously, the fifth viciousness was a combination of vices devoid of any harmony: we already see in this set quite typical male stereotypes that determined the attitude towards a woman as a subordinate biological subspecies – together and despised, and coveted and dangerous, but in something quite substantial Superior to the “older subspecies” of men.

The myth of Prometheus

While Prometheus created a man with his brother, Epimetheus, some conditions of the technical task could not be observed. Prometheus found at first only one way out: to show the current model it is necessary to forge the test conditions.

Gradually, all the weaknesses and diseases, passions and fears that the human being had to overcome by his own strength, Prometheus hid in a deep pithos (barrel). Among the passions and misfortunes that should not have prevented a person from acting as a rational being, there was also excessive dreaminess. And this propensity to dream of the unfulfillable Hephaestus has put in his special protection. Only when the barrel began to overflow, Prometheus realized that at the expense of internal resources a person will not pass the acceptance, and decided to supply his offspring with divine fire – the same instrument without which Zeus was not Zeus and Hephaestus was Hephaestus.

Prometheus understood that Zeus would certainly come up with something to destroy his brainchild, since he himself – like a deity – can not be destroyed. Hesiod does not specify whether Prometheus knew exactly how Zeus will achieve his, but the generally accepted and well-known version of the myth is this message. 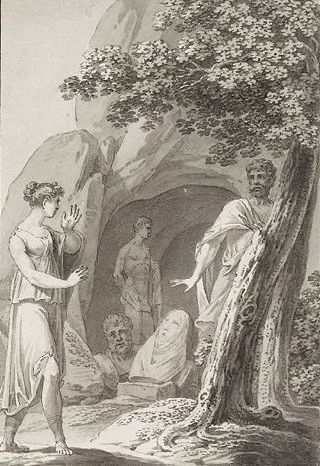 Prometheus tells Epimetheus not to take any gifts from Zeus. Meanwhile, Zeus sends freshly baked Pandora straight to Epimetheus and, in addition, accompanied by the god couriers and merchants Hermes. When Epimetheus, warned by Prometheus, refused to accept Pandora, Zeus in a fury ordered Hephaestus to bind Prometheus to one of the mountains in the area of ​​the present Caucasian mineral waters, where the eagle tore the immortal liver, which nightly reappeared again and again after every meal of the bird.

Another entertaining detail, characterizing more Zeus than Prometheus. To intimidate Epimetheus and mislead the other gods, Zeus accused Prometheus of wanting to get along with Athena herself, who apparently lured the titan to the mountains, but instead of Olympus, where he was expected, the titan found himself in the Caucasus. This plot twist is especially interesting: there could not have been any meeting between Athena and Prometheus, but in the subtext of this gossip is the thought of the unsuccessful production of the perfect man who so wanted to save the gods themselves.

And only when he found out what trouble his brother-brother got into, Epimetheus considered it best not to give up the gift of Zeus and take Pandora as his wife.

As it was said, the lazy but curious Pandora soon got to the pithos and was going to transfer from there into her pixie, or into a box already carrying her name by then, at least for the sake of further use. But, having opened the barrel, she released the bugs collected by Hephaestus of the autonomous computer console “Man” in the performance of Prometheus. Only the intervention of Hermes allowed at least something to leave in the piex, sealing the box tightly.

But still many of the misfortunes that have been hiding a man and for the time being hidden in the pithos of Prometheus and in the Pandora’s pixie – from insanity and senile insensibility to diseases and vices that the young cultivate thoughtlessly, and the old folks madly – escaped outside and since then Subsiding. 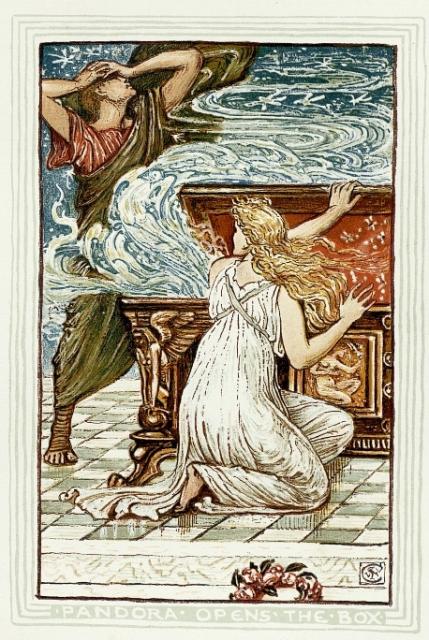 The myth of Pandora as an antifeministic parable

Writer and mythologist Robert Graves was sure that this whole story “is not a real myth, but an antifeministic parable, and it is possible that it was invented by Hesiod himself, although on the basis of the history of Demophonte and Phyllida. Pandora (“gifted by everyone”) Graves identifies with the goddess of the land of Rhea, who under this name was worshiped in Athens and here and there. Rees pessimistically inclined Hesiod accused that because of her man became mortal, suffered so much evil in life, and wives are so prone to adultery.

We can say that the myth of Pandora is a cleverly woven ideologem of “a dangerous and thoughtless woman, launched into production without appropriate tests.” In the illusions of Hesiod’s poems about Pandora, there is a desire to reconcile the most primitive misogynistic ideology with the first attempts at anthropological periodization of the universe.

According to this periodization, the first harvest of people was taken off at Attica, and the first man, Alal’femsey, immediately found himself in the retinue of Zeus and Hera, resolutely resolved their quarrels and even brought up Athena when she was a child.

We, however, remember that Athena was born at once fully armed and completely grown up from her father’s head. He, shortly before, swallowed his beloved pregnant Metis for fear that their common son would overthrow Kronid. The first generation of people worshiped Zeus’s father, Krona, although they did not bring any sacrifices, were vegetarians, happily lived, did not age, and fell into a pleasant sleep instead of death. The golden generation and still somehow accompanies humanity in happy dreams. His blessed representatives consider the truth-seekers and defenders of justice.

On the other hand, many archaists and conservatives are close to the intention of Hesiod-the misogynist, and in later times, philosophers are born all the time, one can say living with the myth of Hesiod. Such is the famous German philosopher-Pandorian – Arthur Schopenhauer.

Hesiod and his scholastic name the people of the silver age “mama’s sons”, who are so accustomed to obeying women in everything, that they became famous only for whining and grumbling, for which Zeus eventually exhausted them all. About the agonizing similarity of silver-age people with the so-called “silver ages” in imperial Rome and in tsarist Russia before the end of the latter, Hesiod does not say anything at all. Next to the silver copper generation is already skillfully using weapons, their militancy became the source of their cruelty, and the copper generation mowed the plague.

The fourth, the so-called heroic generation, which replaced the people of the Copper Age, was the product of mixed unions of gods and goddesses and mortal men and women. This is about them tells a heroic epic. Military and political glory did not prevent them, however, before the death and departure to the islands of the blessed to be noted in numerous cases of killing relatives, incest, kidnapping people and so on.

The heroic age could not hold out for long, because it was at the very beginning that Zeus ordered Pandora to be created. Hermes, who accompanied Pandora to the heavy-headed Epimetheus, from the point of view of many researchers, is an allegory of fundamental mistrust that only people and gods can experience to each other, even such extremely deceitful impostors as Hermes and Pandora. Let’s not forget that Hermes regularly leads Persephone to his mother from Hades, and then leads her back to the underworld. And Evridiku – first to Orpheus, and then – in the opposite direction – led Hermes-Psychopomp (that is, the Soul-maker in the last way). 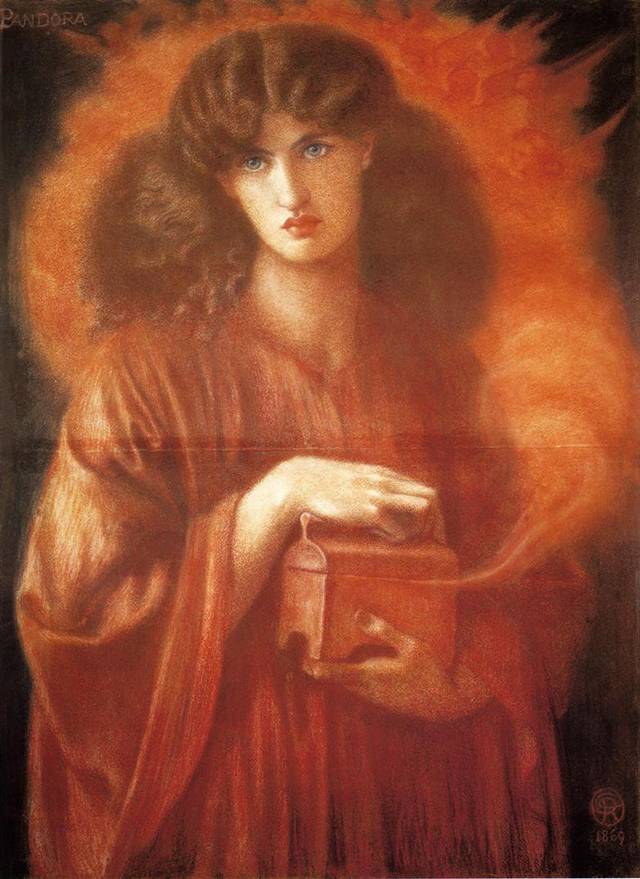 Yes, all these generations will be replaced by iron people whose main characteristic is not the criminal acts themselves, but the fierce collective lie of our century. That’s why there is nothing surprising in the curiosity with which we are waiting for news about Pandora, the embodiment of double or even triple recursion. This curiosity is especially warmed by flashes of fiery misogyny, which from time to time occur even in developed countries, remaining a sad norm for most countries of the earth.