What was the Earth before us? 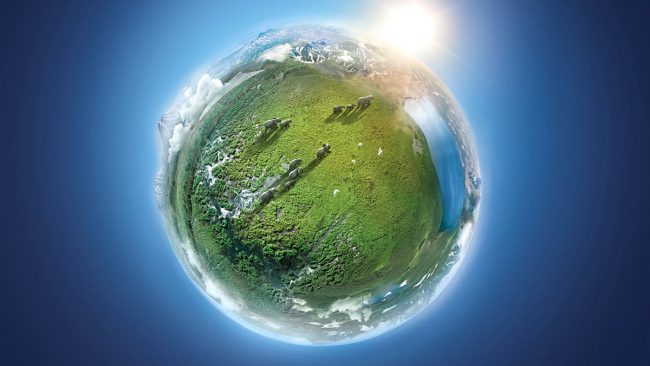 Before the appearance of people, the world was completely different. Our planet did not always look the same as it is now. Over the past 4.5 billion years, it has gone through some of the most incredible changes – and they are utterly indescribable. But we will try to describe them. If you could go back in time for millions of years, you would not just see a few other animals. You would have discovered a completely alien world right from the pages of science fiction.

All over the planet – giant mushrooms 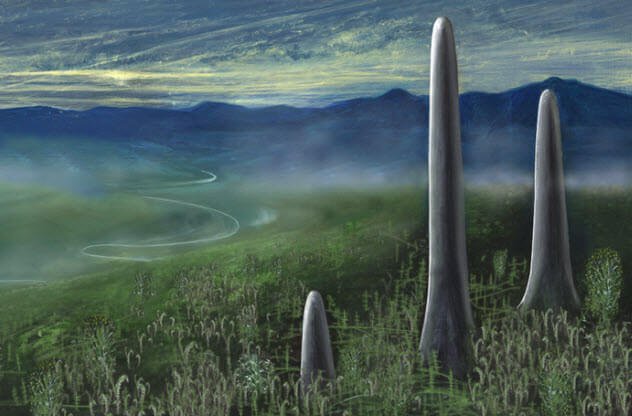 Approximately 400 million years ago, the trees were about the height of a man’s belt. Most of them were a meter high, and other plants were not much larger – but not mushrooms. At some point in the history of the Earth, proto-toxite mushrooms were on every corner of the globe and rose above any other living being.

These mushrooms had legs 8 meters high and 1 meter wide. Yes, they will not be taller and thicker than many modern trees. But at that time they were the largest plants on the planet, exceeding all others in growth by a good 6 meters.

They did not have such large caps at the top, which we are accustomed to see about the feet of the current fungus. Instead, they were entirely a leg – just a large fungus pillar sticking out from under the ground. And they were everywhere. We found the fossils of these pieces on every part of the planet. That is, on the planet of the past were entirely forests from giant mushrooms.

The sky was orange and the oceans green 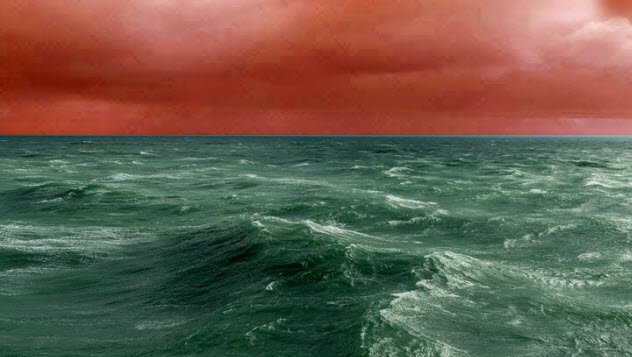 The sky was not always blue. Approximately 3.7 billion years, it is believed that the oceans were green, the continents black, and the sky was bright orange.

Then the composition of the Earth was completely different, and we have every reason to believe that the color scheme was also completely different. The oceans were green, because the iron formations dissolved in the sea water, spilling green rust in the color of a rusty copper coin. The continents were black, because they were covered with cooling lava and there were no plants on them.

And the sky was not always blue. Today there is a lot of oxygen in the atmosphere, but 3.7 billion years ago it was not so much. In the sky was mostly methane. When the light of the sun breaks through the methane atmosphere, it stains the sky in orange.

The planet stank of rotten eggs 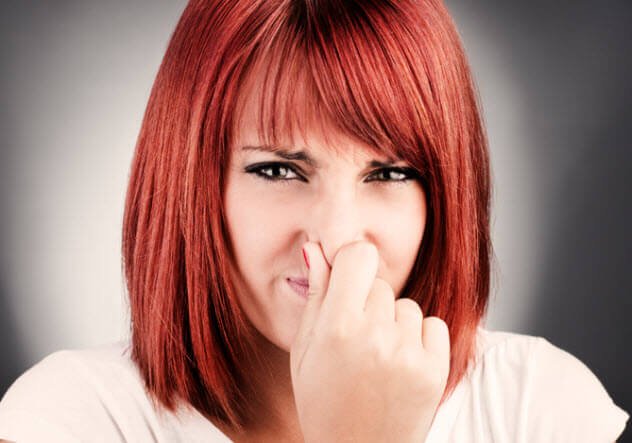 When we talk about what the planet was, we are guided not only by conjectures and theories. Scientists are almost certainly sure that they know what the smell of the planet was in the past. If someone sniffed air 1.9 billion years ago, he would clearly distinguish the smell of rotten eggs.

All because the oceans were full of gaseous bacteria, feeding on salt in sea water. Bacteria were taking salt and releasing hydrogen sulphide, filling the air with a characteristic stench, which we associate with eggs, which is already everything.

And these scientists are still trying to express themselves softer. Let’s be honest – we have creatures that daily emit hydrogen sulphide into the air. We can say that the world of the past smelled of fart.

The planet was purple 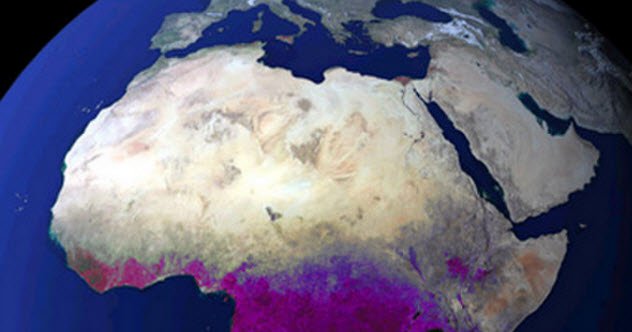 When the first plants began to germinate on the Earth, they were not green. According to one theory, they were purple. If you looked at our planet from outer space three or four billion years ago, it would be violet to the same extent as green today.

It is believed that the first forms of life on Earth absorbed the light of the Sun a little differently. Modern plants are green because they use chlorophyll to absorb sunlight, but the first plants used the retina and had a distinctive violet hue.

Perhaps purple for a long time would be our color. About 1.6 billion years ago, after the plants covering the planet became green, purple steel and our oceans. A thick layer of purple sulfur covered the surface of the water, and it was enough to color all the oceans in purple and make them incredibly toxic. 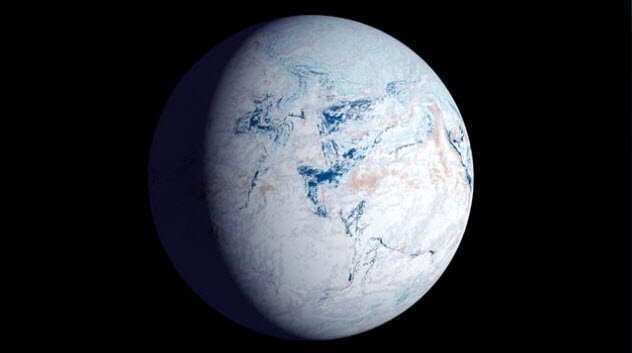 We all know that our planet experienced glacial periods. However, there is accurate evidence that 716 million years ago, winter was at its peak, like in some kind of cartoon. This period is called the period of “Earth-snowball”, because the Earth was covered with ice almost completely and from space looked like a giant snowball.

The world was so cold that there were glaciers on the equator. Scientists have proved this by discovering traces of ancient glaciers in Canada. It may be hard to believe, but 700 million years ago this part of Canada was at the equator. The warmest places on earth were as cold as the modern Arctic. However, now scientists do not think that the Earth was like a white snowball, because 716 million years ago, with her was another horror. Volcanoes constantly erupted, filling the sky with ashes and mixing ice, snow and ashes into one dirty grayish mass. 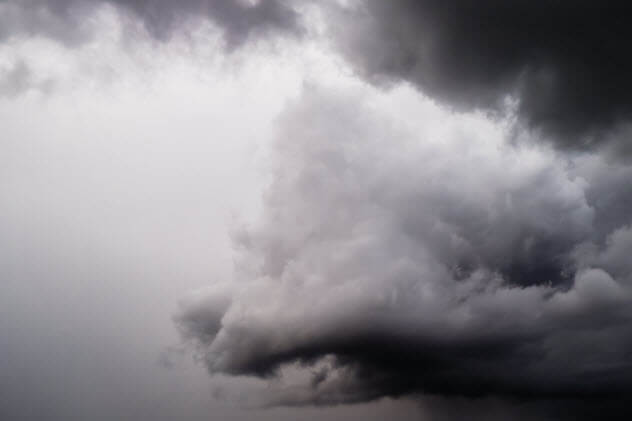 Eventually the period of the Earth-snowball ended. But this did not stop the horrors. It is believed that after this the Earth went through a period of “intensive chemical weathering”. Acid rain constantly washed the earth from heaven for 100,000 years.

The acid rain was so heavy and pungent that the glaciers that covered the planets melted. But there is no harm without good – in the process, nutrients have gone into the ocean, which allowed life to appear, sent oxygen into the atmosphere and provided the Cambrian explosion of life on Earth.

But before that the air was full of carbon dioxide, and acid rain poisoned the ocean. While life did not scatter around the Earth, it was a poisonous, inhospitable desert.

The Arctic was green and full of life 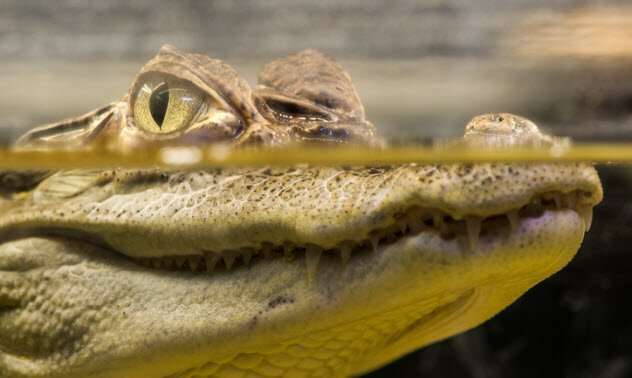 Approximately 50 million years ago the Arctic was a completely different place. This time was called the early Eocene, and the world was much warmer than it became later. In Alaska, palm trees could be found, and crocodiles swam off the coast of Greenland.

Even the northern cap of the planet was covered with greenery. It is believed that the Arctic Ocean was a gigantic fresh water basin and life in it was just boiling. The water was full of green algae, and green ferns bloomed throughout the Arctic.

But the tropics call those times it was difficult. Then the warmest months in the Arctic were about 20 degrees Celsius. And still the northern parts of our world were full of giant turtles, alligators, the first hippos that got used to live in eternal winter or darkness.

The dust covered the sun 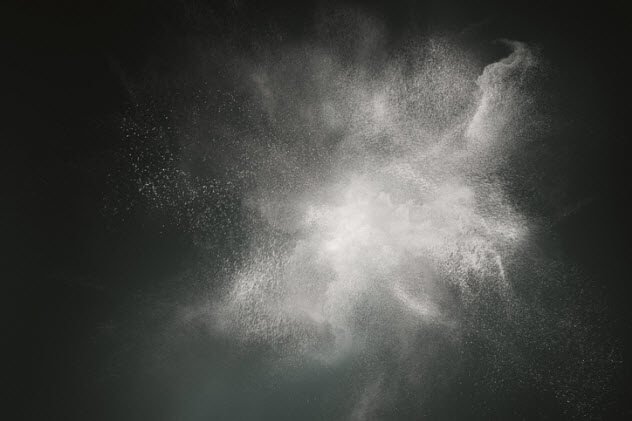 When an asteroid, guilty of the death of dinosaurs, fell to Earth 65 million years ago, one fall did not end. The world has turned into an eerie, dark place.

The fall of the asteroid sent dust, soil and stones straight to the sky and even into space. Tons of them remained in the atmosphere and surrounded the planet with a massive layer of dust. For the creatures that were on Earth, the Sun itself disappeared from heaven.

It did not last long – several months. But when a giant cloud of dust settled, sulfuric acid remained in the stratosphere and hit the clouds. They became so thick that over the course of ten years acid rain fell on the Earth. 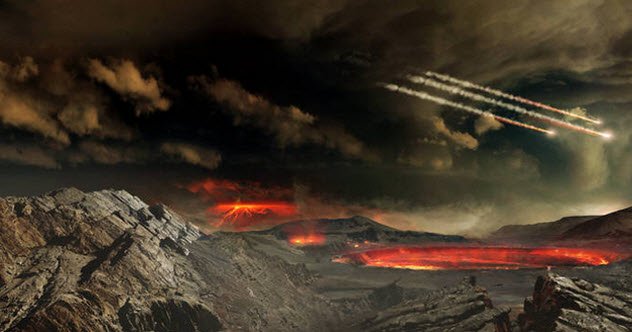 That same asteroid, however, was nonsense compared to what fell on the planet four billion years ago. In the early days of our planet, the rain of asteroids bombarded the Earth and turned it into an infernal planet from the pen of a surrealist artist.

The oceans on the planet became so hot that they were boiling. Heat from the impact of the asteroid evaporated the first oceans on Earth, turning them into steam, which simply disappeared. Huge parts of the Earth’s surface melted. The giant solid masses that covered the planet turned into a liquid that simply floated around like a slowly moving river at intolerably hot temperatures.

Worse, some rocks have evaporated and become the atmosphere of the Earth. Magnesium oxide rose into the atmosphere like evaporating water, and condensed into droplets of liquid hot magma. Therefore, almost as often as we see rain today, in ancient times the Earth saw a magma falling from heaven. 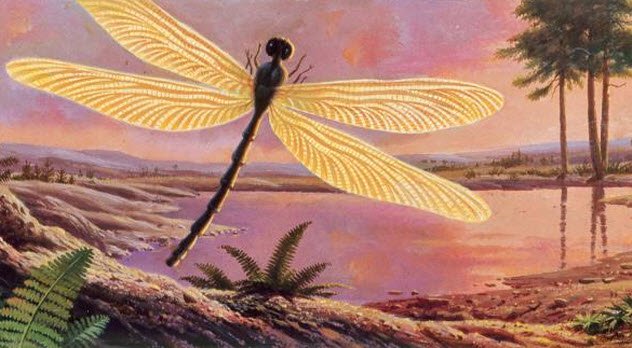 About 300 million years ago the world was covered with massive lowland swamp forests, and the air was filled with oxygen. Then there was 50% more oxygen than today, and there was an incredible explosion of life. Also appeared giant insects, as if from a film.

For some creatures of all this oxygen in the atmosphere was too much. Small insects could not cope with it, so they became more and more. Some of them became huge. Scientists have found fossil remains of dragonflies the size of modern gulls and a wingspan of 0.6 meters.

Giant beetles and other insects were walking along the Earth. But not all of them were friendly. Giant dragonflies, according to scientists, were carnivorous.