Where in the state of Washington appeared giant dry waterfalls 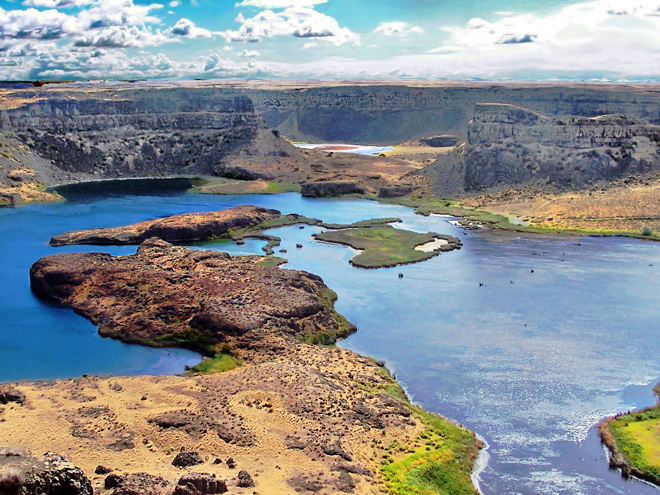 Dray Waterfall is not the only landmark on the Columbia Plateau. On the territory of 40 thousand square kilometers there are hundreds of other dry waterfalls, canyons without rivers (dry channels), gravel embankments with a height from the skyscraper, deep holes in the rock that could absorb whole city blocks, and countless boulders.

What created this landscape? The answer to this question was found by a physics teacher named Harley Bretz. In 1909, Bretz saw a new topographic map of the Quincy Basin, a large area in the west of the Columbia Plateau. He immediately drew attention to a huge waterfall (very similar to the Drai waterfall) on the western edge of the pool. The waterfall was larger than Niagara, but beside it there were no signs of a river that would carry water to it.

And then Bretz decided to become a geologist. He graduated from the University of Chicago and in 1922 returned to the east of Washington to look at the plateau and its valley-channel complex.

After spending two field seasons on the Columbian plateau, Bretz came to conclusions that shocked him. The only possible explanation for all the geological formations of the region was a gigantic flood, probably the largest in world history.

The theory of the Missouli flood, which defined the landscape of the Colombian plateau, met with harsh criticism. Bretz believed that the flood occurred during the Ice Age and “cut” three parallel channels south of the Cordillera Ice Sheet (which covered Canada and the US North), filled a temporary lake the size of Rhode Island, which after being emptied like a crowded bath , In the canyon of the Columbia River. Along the way, the flood waters formed the famous Grand Cooley – a ravine 5 km wide with thousands of meters high, created hundreds of waterfalls, carried boulders the size of cars and even small houses and formed a network of branched channels.

Rivers and streams could not do this, Bretz claimed. The geologist was sure that the flood was so strong and large-scale that the landscape formations were formed literally overnight.

It took another two decades for other scientists to believe in the Bretz hypothesis. Subsequent studies have shown that 80 or more floods raged on the Columbia plateau at the end of the last ice age.

Moreover, something similar could happen during the previous glacial periods. And this means that the most significant structures of the landscape, such as the Grand Cooley and the Drai waterfalls, formed over a long period of time, and not in the blink of an eye, as Bretz believed.