Where the Mayan civilization disappeared 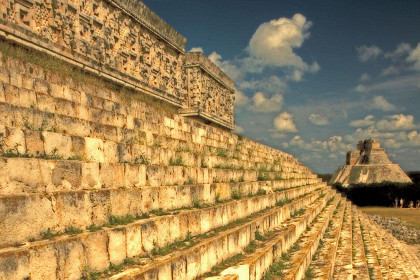 Spanish conquistadors arrived to the shores of Central America in 1517, intending to build their state on the bones of the Mayan civilization. But the colonists were somewhat late: on landing, they discovered that most of the work had already been done for them.

The political and economic structure of the great civilization has sunk to oblivion, and the largest cities have become the prey of the jungle.

The question of what happened to the Maya, until now remained open, because the people themselves survived and even organized resistance to the Spanish colonists.

The first Mayan cities were built in the first millennium BC. In the chronology of Mesoamerica, Maya is located between the Olmecs and the later Aztecs. Archaeologists have discovered thousands of ancient Mayan cities, most of which are located throughout the Yucatan Peninsula in southern Mexico, Belize and Guatemala.

Maya was an intellectually developed nation. They were well versed in the mathematics and astronomy that they used to align their pyramids and temples in accordance with the precession of the planets and the solar equinox. And they are the only Mesoamerican culture with a written language. So what could destroy them?

In the year after Christ 850, after centuries of prosperity and domination over the entire region, the Mayans began to leave their magnificent cities one by one. Only two centuries was enough for the civilization to slide to the very bottom. Later, of course, there will still be isolated city-states, but the former greatness of Maya will never be returned.
And archaeologists can not understand in what way this is connected. As in the case of the Roman Empire, it is probably worth looking for the cause in a combination of factors. However, the nature of the decline forces some researchers to believe that the Mayan civilization fell prey to a major catastrophe that hit the city.

There are a lot of theories about the fall of Maya. Favorites are invasion from outside, civil war, destroying trade routes. Since in 1990 archaeologists received data on the climatic development of the region, the prevailing idea was that the Mayans were doomed because of serious climate changes.

Most Mayan cities declined between 850 and 925, which largely coincides with data on the age-old drought. When the periods of drought were first identified, the researchers noticed a striking correlation between their timing and the collapse of the Maya.
The second wave of drought destroyed all the major cities of civilization. Pala even the majestic Chichen Itza. Crafts fell into decay, people, trying to save themselves from hunger, migrated from the region to the region. The whole country was very dependent on crops.

Accordingly, the economic and political might of civilization has also declined. The attack of neighboring tribes completed the picture, leading to the complete disintegration of society.