Where the statues of Easter Island look 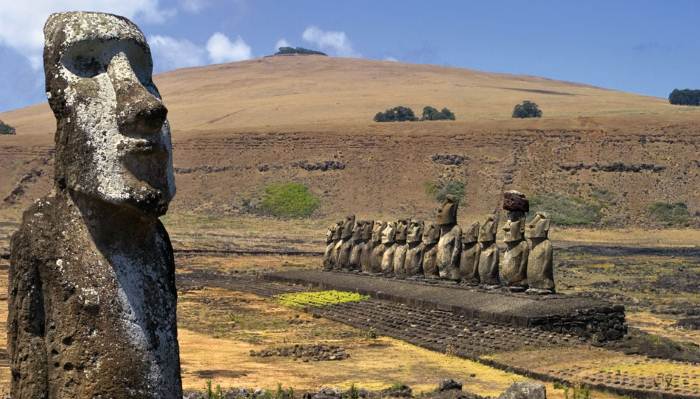 The mystery of the Easter Island with its majestic statues and structures is interesting in itself, but even more curious, it becomes if you take it from the perspective of the fate of mankind.

The history of the discovery of the islands of the South Seas is also linked to what Europeans considered to be one of the confirmations of divine providence on the earth symmetry, and in the era of great geographical discoveries there was an opinion that both in the Northern Hemisphere there is the continent of Eurasia, and in the Southern, symmetrically to the center Earth, it should be something “counterbalanced”. But instead of the expected mainland, groups of islands were discovered in the Pacific Ocean, on which the amazing people lived. Surprisingly it was that he was scattered over thousands of kilometers, lived on small islands and yet formed a single culture.

Easter Island remains one of those mysteries of civilizations that continue to attract researchers. The Dutch discovered it by accident, and the picture opened shook them: samples of magnificent stone masonry, giant stone platforms created with great art and, most striking, the titanic dimensions of the statue – a height in a modern four-story building. On the island by that time there lived two different people, one of which corresponded to the classical notions of the population of the South Seas – stocky, with golden skin and dark hair – and the second attracted the attention of the discoverers with light skin color and reddish hair. It was these fair-skinned people who considered themselves descendants of a highly developed culture that created structures and statues, similar to which they did not meet anywhere.

The island is isolated by thousands of kilometers of water – so, in order to solve the riddle of the origin of these statues, it is necessary to understand where this tradition could come from. But how was it possible to transfer the tradition in the ancient world over great distances and was there such a transmission? Perhaps all known coincidences in ancient civilizations are simply a consequence of a similar psychological constitution of ancient people? Such coincidences include, for example, giant stone structures, the so-called megaliths and menhirs, or huge stepped pyramids that are found literally in all regions of the temperate and warm climatic belts of the Earth. If the reason is purely psychological, then the culture of Easter Island may well be original. But even if the statues are a local invention, the question remains of the very culture in which they originated and the appearance of its bearers on the island.

The theory about the settling of the Pacific islands from west to east, that is, from Asia, is universally recognized so far. But there are several contradictions in this theory. The islands were inhabited around the 5th century AD. By that time, there was a developed art of metallurgy in Asia, but there were no traces of the use of metal on the Pacific islands. It was the culture of stone tools. Civilization, which did not know metal guns, existed only in the American continent by the 5th century.

In addition, the Indians of South America had one mysterious legend that can be related to the fate of the Pacific islands: it is the legend of the ancient leader Kon-Tiki (Sun-Tiki), who founded a civilization whose achievements were inherited by the majestic empire of the Incas. The image of Kon-Tiki, otherwise called Viracocha, has all the features of the general cosmic deity, the center of the flashes of Inca monotheism:

“O Creator, the root of everything, Viracocha, the end of everything, the Lord in radiant clothes, the Nascent life and everything bringing order, Saying:” Let there be a man! Let there be a woman! “Creator, creator, You gave life to all – Keep them, May they live in prosperity and happiness, In safety and peace.”

But the fact that the Incas ascribe to Viracocha and his tribe the megalithic constructions in South America and accurately describe his human image, leads to certain conjectures. Perhaps Kon-Tiki and his associates were a historical group of people who only in time acquired ever more divine features. The outward appearance of Kon-Tiki and his associates, as described by the Incas, recalls the fair-skinned inhabitants of Polynesia, because both here and there we are talking about “white, fair-haired, bearded people.” Legends of the Incas can be deciphered and in such a way that representatives of this supposed more developed group, unable to withstand the raids of wild neighbors, moved to seek a more peaceful place of dwelling. And they walked from the area of ​​Lake Titicaca in the highlands of the Andes to the west, and to the west was the Pacific Ocean. Perhaps, therefore, there is no coincidence that the name of Tiki belongs to the legendary ancestor of the Polynesians. Maybe it’s about the same person who really existed leader?

But here’s the ill luck: the South American Indians, who built the developed countries, possessed the rudiments of writing and considerable knowledge of architecture, there were no ships to overcome thousands of kilometers of water. They had only huge rafts made of balsa wood. Is it really possible to make a transoceanic trip on such rafts? It was this question that set in the post-war years the beginning Norwegian ethnographer, former commando Thor Heyerdahl.

He was sure that on a balsa raft, made according to precise drawings kept by Spanish monks in his descriptions of South America, it is really possible to cross the water area from the South American coast to the islands of Polynesia. And this is neither more nor less than 8 thousand kilometers! But Heyerdahl was so sure that the resettlement of the Indians from the territory on which the Inca Empire (from Ecuador to Chile later) arose, the Polynesian islands happened exactly this way. And the ocean did not share civilization, but, on the contrary, connected them. Having killed the team from their combat comrades, Heyerdahl went on a risky voyage. Interested observers made bets, after how many days its raft would fall apart and sink. The rafting on the Kon-Tiki raft lasted more than three months, none of the six participants suffered, and the raft, leaving Peru on April 28, 1947, safely arrived on the islands of the Raroia Atoll on August 7 of the same year. This incredible journey was described in detail by Heyerdahl in the travel diary “Expedition to Kon-Tiki”.

This experiment did not in fact prove that the ancestors of the Polynesians were companions of Kon-Tiki Viracoce. He confirmed only the possibility that such a trip could technically take place. Vehicles of ancient people allowed them to swim the oceans, and the subsequent travels of Heyerdahl proved the possibility, for example, for the ancient Egyptians to reach the shores of America on papyrus ships. Here, too, allowing an opportunity that still needs to be checked by research, one can speak of a great pracivilization that could serve as a prototype, for example, of Platonic Atlantis, located “somewhere in the West.” Of course, the death of a few days of land “exceeding the size of Libya and Asia,” as Plato writes, is physically impossible. But maybe the memory of Europeans has fancifully interwoven several events? And pracivilization, reflected in the legend, was not located in the middle of the Atlantic Ocean, but, for example, in the west of Africa? Which in the glacial period and somewhat later was not covered by the desert, but remained a rather pleasant place – savannah with fertile land and fat herds of animals, as one can conclude from the surviving rock carvings. Or in some other place on the planet, still waiting for its discoverer.

Easter Island is important as an episode necessary for understanding the fate of ancient civilizations in every corner of the earth. Cultural skills in the ancient world often wandered along with their owners, moving skills, legends and races around the planet. Knowledge of these routes could help to understand the people of this century, for which historical identity is so important. Moreover, our knowledge of the deep origins of our civilization is obviously incomplete. What do we know in essence about the culture of humanity before the emergence of the first vast administratively connected states? Very little.

The first traces of orderly farming and cities were found by scientists in the so-called. Fertile crescent (land in the Middle East), and they belong to the 9-10 millennium BC. But this does not mean that agriculture is just such an age, because we know cities that are even older, for example, Jericho, and the city existing in the pre-farm era can not be represented at all.
In addition, we are better acquainted with the history of those places where civilization existed all the time. But there were territories, for example, the already mentioned Sahara desert, where the climate and terrain conditions were favorable for man, and the deterioration of conditions occurred later. In such places, mysterious pracivilization might well be present, the acquaintance with which is present in historical information, which has survived to the present day in the form of legends.

Legends of Predecessors have been and remain massively popular throughout the history of mankind, and, perhaps, a rare field of knowledge has acquired so many legends, guesses and conjectures. And in our time, arguments about pracivilization are greatly complicated by the fact that they are readily attacked by primitivists from racial theories, translating the subject talk into a dispute about who is the greater Aryan. But a thoughtful and careful approach to the study of the depths of the history and destiny of the Kovchevs of high civilizations can open much in the understanding of today’s humanity – which so needs to understand itself.