Where was the Great Tartary? 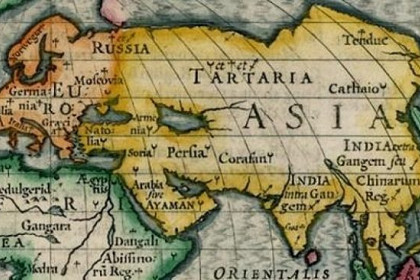 Medieval people imagined that somewhere far away, there really are mystical monsters. For example, geographers and cartographers of Western Europe believed that in the east there is a huge territory called the Great Tartar.

It is probably there that the river of the dead originates, and the inhabitants of this country once announce to the whole world about the coming of the end of the world. Where was this mystical land? What kind of country?

The Great Tartary is a geographical term used mainly by Western European scholars. From the 12th to the 19th century they placed this state in various parts of Asia: from the Urals and Siberia to Mongolia and China.

Some cartographers believed that the so-called all the land, not investigated by representatives of the Catholic world. And then the borders of Tartary were moving from the Caspian Sea to the Pacific Ocean. Other scientists, on the contrary, associated this mysterious country with Turkestan or Mongolia.

For the first time this toponym is found in the works of the Navarre rabbi Veniamin Tudelsky, about 1173 this traveler wrote about Tartary, calling it a Tibetan province. According to the Jewish religious figure, this country is located north of Mogulistan in the side of Tangut and Turkestan.

The origin of the toponym “Tartary” scientists connect with the contamination of two terms at once: ancient Greek Tartarus and the name of the people “Tatars”. It is believed that these words united in the minds of the inhabitants of Western Europe because of their similarity in sound.

The fact is that from the caravans who transported goods from China along the Great Silk Road, the Europeans heard about the mysterious Tatars inhabiting the eastern lands.

Since the Chinese almost all peoples living to the north of the Celestial Empire, including the Mongols and Yakuts, were called Tatars, in the West a notion was formed that Tartary is a huge power that occupies almost all of Asia.

In the XIII century, after the raids of the troops of the Mongolian Khan Baty to a number of European countries, the attitude towards the Tatars became negative. They began to perceive as horrifying warriors from the east, the hordes of which once put an end to the existence of Christian civilization. In religious texts it was said that Tatars are savages, ferocious like demons sent by Satan himself.
In addition, according to ancient Greek mythology, Tartarus is an abyss that is under the kingdom of Hades (the world of the dead). Because of the similarity of the ethnonym “Tatars” with the name of pagan hell in Western Europe, the opinion was formed that the Great Tartary is a land where different monsters and monsters, including the legendary Gog and Magog, live, and people there worship the Antichrist.
It was believed that the source of the river flowing through the given territory is in the otherworldly reality.

Many scientists from Western Europe considered the Great Tartary a huge empire stretching from the Urals to the Pacific Ocean. For example, the Italian diplomat and Jesuit Giovanni Botero in his work “Universal Relation” (Relationi universali), dated 1595, wrote that this country used to be called Scythia. And it occupies half of Asia, in the west bordering on the Volga region, and in the south – with China and India. At the same time, the lands of a huge empire on one side are washed by the waters of the Caspian Sea, and on the other by the Bering Sea.
Another representative of the Jesuit order – the French Orientalist Jean-Baptiste Duhalde – in 1735 published a scientific work entitled “Geographical, historical, chronological, political and physical description of the Chinese Empire and Chinese Tartary.” In his opinion, in the west this huge country borders with Muscovy, in the south – with Mongolia and China, from the north this state is washed by the Arctic Sea, and the East Sea separates Tartarius from Japan.

And in 1659 in London was published an annex to the work of Cardinal of France Dionysius Petavius ​​”The Science of Time” (Opus de doctrina temporum), devoted to geography. It said that the Tartar River irrigated most of the vast empire. According to the cardinal, the Great Tartary from the west is bounded by the Urals, and from the south by the Ganges River. In the north of the country lies the coast of the Frozen Ocean, and the waters of the Qing Sea wash this territory from the east.

However, not all scholars were inclined to give the Great Tartary such vast expanses. Some geographers had this country in Central Asia. Thus, the encyclopedia Britannica (volume 3, 1773) indicates that the state of tartar is south of Siberia, north of India and Persia and west of China.

This view was also shared by the Swedish researcher Philip Johann von Stralenberg. In 1730 he published the “New geographical description of the Great Tataria”, placing this state between Mongolia, Siberia and the Caspian Sea.

A number of scientists directly associated Tartary with the birthplace of Genghis Khan. The Italian diplomat and Franciscan Giovanni Plano Carpini, who visited Mongolia in 1246, left a bizarre description of this country. In the work “The History of the Mongols, which we call the Tartars,” he combined his travel experiences with medieval mystical legends. For example, the author mentioned firecrackers, people with dog heads and cow hooves, as well as creatures whose legs do not have joints.
Apparently, Plano Carpini pursued two goals: impress the readers and not contradict the established among the Catholics view of Tartarus.

Many Western European cartographers were guided in their work precisely by the works of the Italian Franciscan diplomat for several centuries.

Some scientists considered the Great Tartarus the mysterious expanses of Siberia. So the Flemish Abraham Ortelius in 1570 published the atlas of the world “The spectacle of the circle of the earth”. In this edition, Tartaria was located between Muscovy and the Far East.

Some researchers have mentioned in their works that in a huge empire it’s so cold that ice is already shallow under the earth. It was here, as the French traveler of Hungarian descent, Franz Tott, believed, was the cradle of humanity. In his Memoirs on Turks and Tartars (1784), he wrote that the earliest people migrated from Tartarus to the south and west, populating China, Tibet, India, and later Europe.

Many Catholic scholars regarded the border between Europe and Asia as the mystical frontier of Good and Evil. And although Moskovia geographically located west of the Ural Mountains, in the minds of the British, Italians, French and Germans, it coincided with the image of a strange, distant, wild and dangerous land. Therefore, geographers often put an equal sign between Rus and the Great Tartarus.
For example, the English explorer John Speed ​​in 1626 presented to the scientific community the “New Chart of Tartaria” compiled by him. In the publication there was an image of a typical resident of this country, he was wearing clothes worn by the oprichniks under Ivan IV the Terrible. And the cartographer drew a Russian tsar sitting in a yurt.

In addition, some historians and geographers from Western Europe considered the North Caucasus to be the westernmost part of the Great Tartary.
As for domestic scientists, they avoided this toponym for two reasons:

knew that there was no people called “tartars”;
Tartarus was associated with the world of the dead or a country ruled by evil forces.

Although on the very first Russian maps you can find this state, which is explained by the influence of the Western European tradition. Thus, Tartary got on the “Draft of Siberia, zbiranny in Tobolsk by the order of Tsar Alexis Mikhailovich,” which was compiled in 1667 under the leadership of boyar Peter Godunov.

I have a number of interesting original copperplate engravings from Bankes’s New System of Geography (circa 1790) which feature costumes worn by Tartars. These include Usbec and Calmuc Tartars; the habits of the women from Eastern & Western Tartary; the habits of Oriental or Eastern Tartars and the dresses and persons of TWITSIKAR, a province of Eastern Tartary. 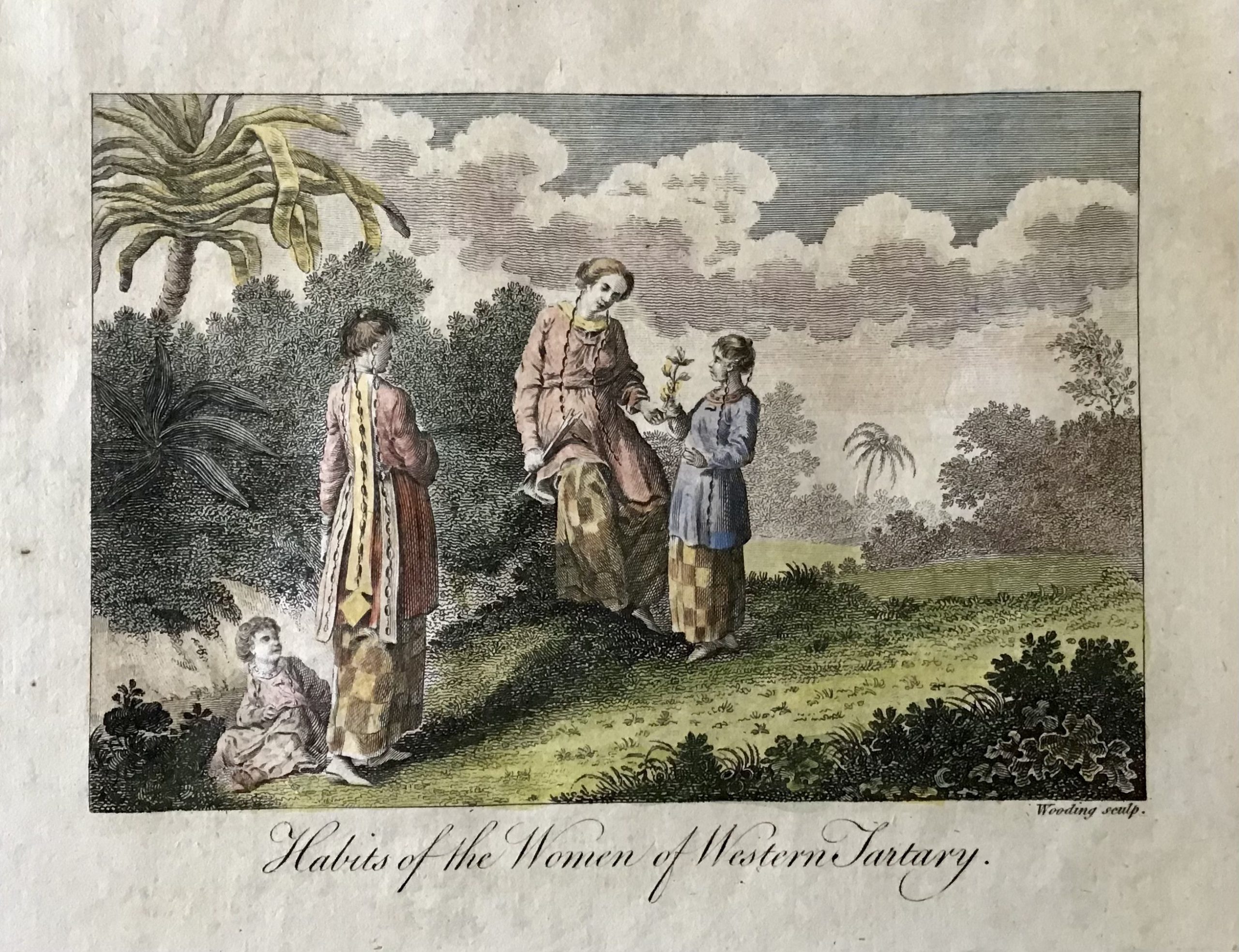