Who attacked the pilots in the air? 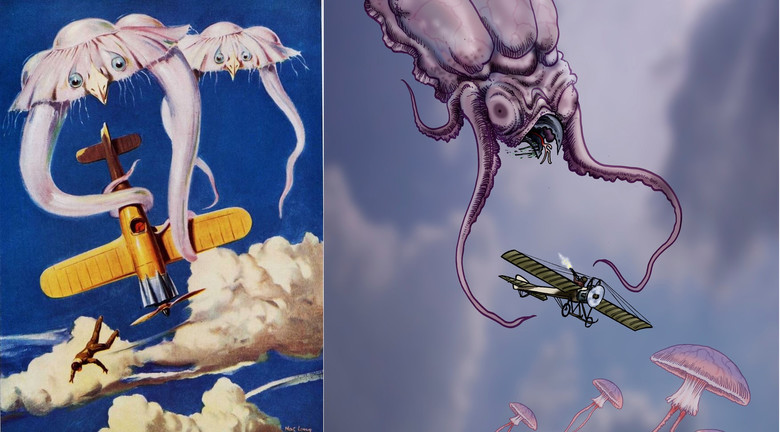 “Our world is very poorly protected from the strange and sudden danger threatening it. In the higher layers of the atmosphere, too, there are jungles, and they are inhabited by creatures worse than tigers. ” This is how Arthur Conan Doyle’s fantastic story “Horror of heights” begins, which was published in 1913. The genius writer did not even suspect how close he was to the truth.

The hero of the story, the pilot Joyce Armstrong, was torn to pieces by monsters in the air. Terrible truth helped to open his notebook, found among the slime-covered wreckage of the aircraft. In 1939, Conan Doyle’s story became a reality!

One day a military transport aircraft flew from the airfield in San Diego, making regular flights to the Hawaiian Islands. After three hours, the radio operators received a distress signal from him.

Then the transmitter fell silent. But soon, from the control tower, they saw an ill-fated plane returning to the airfield. He struggled to reach the runway and landed on the bottom, without releasing the chassis.

When rescuers and firemen arrived to the place of emergency landing, they found a terrible picture. Although the cabin remained unscathed, everything inside was covered in blood. The pilot and the flight engineer lay dead. The lacerations on their bodies looked like they were attacked by sharks. The co-pilot, who drove the plane to the airfield, was dying of loss of blood. He died without saying a word.

The entire floor of the cabin was strewn with gun cases. In the pistols of both pilots there was not a single patron left. There was a heavy smell of rotten eggs on the plane. All the rescuers working on the plane subsequently suffered from skin irritation.

A quarter of a century later, two pilots flew out on a small private plane from Nome in Alaska. A few hours later, the voice of one of them sounded on the air: “Help! Help! We are surrounded by a dazzling light! Both engines refused! This thing … “. The voice abruptly broke off. Nobody knew anything about what had happened.

September 8, 1970 in the night sky over Binbrook (England) lost a military aircraft “F-94”. Shortly before his disappearance, the radar operator received a very strange message from the pilot, Captain Scheffner:

“I have visual contact … This is something vague, without clear outlines. It’s a bluish light. Damn, well, brightness! Very bright … I’m right next to him. It’s a cone … Hey, wait, here’s something else! It’s like a big soccer ball made of glass … Maybe there is a magnetic relationship between it and the cone. There luminous haze. Yellow. For a second … He turns. It is directed directly at me … I am taking a maneuver to deviate … I can firmly … ».
The connection was lost.

Only two months later the plane of Sheffner was found at the bottom of the North Sea. It was almost intact, as if someone had carefully lowered it under the water. The strangest thing was that all the straps and ejection seat were left on the plane, but … there were no traces of the pilot! This means that someone has abducted Captain Scheffner, without unbuckling his belt, or then buckled them back.

During the incident with the “F-94” the police and the coast guard received numerous reports of UFOs.

“Going out, I saw bright objects in the sky,” said Englishwoman Jill Cooper. “I brought the binoculars and saw that they were six plate-shaped silver-metallic bodies.” In the middle of each of them the orange twisting flame was shining. ”

The same night, three eyewitnesses walked their dogs along the path along Elmut Bay in Northumberland County. This is the point lying on the opposite shore of the North Sea in relation to the point at which Scheffner met the UFO.

“We walked for about ten minutes, when we heard a buzzing high-pitched sound,” they said later. “The dog snarled, looking up, we could not understand where the sound came from. It seemed to come from everywhere … It lasted 10-15 seconds. About five minutes later on the eastern side of the sky appeared a lightning, which did not die out for about ten seconds. The next three minutes were repeated many times, but already lasted 1-2 seconds. It was like the northern lights. The amazing spectacle was completely soundless. After 2-3 minutes another spook of the sky lit up, but this time it was accompanied by a terrible anxiety; we felt the ringing in our ears. ”

Conan Doyle was right. It seems that in the atmosphere of the Earth really there are creatures “worse than tigers” …