Who built ancient cities on artificially created islands in the middle of the Pacific Ocean?

Nan-Madol is an artificial archipelago with a total area of ​​79 hectares, consisting of 92 islands connected by a system of artificial canals. It is also known as the “Pacific Venice”. Located near the island of Temven, to the southeast of the island of Ponape, part of the Caroline Islands, and until 1500 AD. e. was the capital of the then ruling dynasty, Cole Deleur.

Scientists have discovered a new prehistoric city in the middle of the Pacific Ocean. Satellite images show giant square blocks located off the coast of Pohnpei Island. These square stone structures are surprisingly identical and geometric in shape.

Many know about Nan Madol, but very little is known about the ruins that were discovered there on the island of Pohnpei quite recently. Pohnpei, a small (345 square kilometers) volcanic island in the middle of the Pacific Ocean, in Micronesia: from here it is far to continental Asia, and to the island SEA, even further to Australia and America.

The remote island of Pohnpei is located within the island chain of Micronesia. Nan-Madol, a small archipelago to the southeast of Pohnpei Island in the Pacific Ocean, is just a short distance away, consisting of more than a hundred artificial islands of basalt monoliths and coral blocks connected by a canal system and it is the site of archaeological excavations.

On the island of Ponape, lost in the Pacific Ocean, civilization developed and died long before the first European appeared there. In the era of great geographical discoveries, Spanish, Portuguese, Dutch and English sailors, returning from distant voyages, told many incredible stories about the wonders of the Pacific islands.

Scientists, as a rule, considered these stories to be ordinary seamstress bibs and therefore did not believe the story of the Spanish captain Alvaro Saavedra, who in 1529 told about the amazing island of Ponape, lying between the Hawaiian archipelago and the Philippines. The captain claimed: on the island there are ruins of temples, palaces, incomprehensible large structures, stone embankments. According to him, the abandoned city remotely resembled Venice.

For a long time geographers considered the mysterious city on Ponape as a legend, until the Russian navigator Feodor Petrovich Litke visited the island during the circumnavigation of the sea in 1826-1829 on the sloop “Senyavin”. He first compiled maps of the island, described the mysterious ruins of Ponape and put on the map the neighboring islands.

Ponape is a volcanic island with a diameter of only 15 kilometers, surrounded by a barrier reef. It is part of the Carolina Archipelago of Micronesia near the equator. The coast of the island is strongly destroyed by tropical typhoons, and in the center of it – impenetrable dense thickets. In the east of the island there is an artificial lagoon, and here the reef barrier is destroyed by human hands. Inside the shallow lagoon are the ruins of the ancient city of Nan-Madol, located on more than a hundred small islands.

Inspecting the ruins, Litke was convinced: the inhabitants had long left the city, and only on the opposite side of the island in primitive conditions lived a handful of natives. Unfortunately, all the information about Ponape, collected by Litke, was lost in the archives of the Russian Geographical Society and never completely published. In 1857, the ruins of Nan Madola were surveyed superficially by an American L. Gyulik, and a little later Pole I. Kubari, who settled on the island, compiled the first detailed plan of the ruins.

In 1896, an Englishman, F. Chrischen, appeared on Ponape, a researcher unceremonious and dishonest. Guided by the Kubari plan, he subjected the ruins of Nan Madol to a real robbery and himself nearly died at the hands of local residents after he looted several ancient tombs venerated by the natives.

The most serious archaeological study of Nan Madol was undertaken by the German scientist Paul Humbruch at the end of the 19th and beginning of the 20th centuries, who established: all islets inside the lagoon of artificial origin!

Unknown builders brought from the north of the island basalt slabs, laid them in rows along and across, and if the blocks were irregularly shaped, the spaces between them were filled with coral rubble. The top parts of most platforms were flat, convenient for erecting buildings.

During strong tides, the space between the platforms was flooded, and the town was covered with a network of canals, resembling a small Venice. Humbruch put on the map ninety such artificial islands. He also found artificial reservoirs, foundations of palaces and temple buildings.

In 1908, the book of Hambruch, dedicated to the research of Nan-Madol, was published. In it, the scientist suggested that on Ponape for several centuries, the religious and cult center of the Micronesians, where people from other islands in Oceania made pilgrimage, acted.

The legends recorded by Humbruch from Aboriginal words also testified to this. According to these legends, once the island was ruled by the prince Sau Deleur, whose name gradually became a title and signified the king-priest. Such Sau Deleurov was fifteen, and then the dynasty died down. It is this dynasty that is due to the merit of erecting stone buildings on artificial islands.

The scientist defined the beginning of the construction of the sacred city of about V centuries AD. In 1958 this was confirmed by an examination carried out by researchers from the United States. The German archaeologist recorded the legend of the islanders about the main goddess Nan-Madola, turtle Nanunsunsan. For her, a palace with a swimming pool was built, and the goddess herself was decorated with mother of pearl. On the days of the holidays the priests took her on a boat along the canals and shouted prophesies on her behalf. Then the goddess was roasted and solemnly ate. Americans in 1958 at the bottom of a waterlogged pond inside the temple found thousands of shells of such goddesses.

By 1914, Humbruch and other researchers established: in Nan Madol there were about eight hundred stone structures, including fortress walls and port buildings. The main temple was built from megalithic blocks. Under this temple was discovered a network of tunnels and canals through which people and boats could enter.

Archaeological discoveries on Ponape have produced many fantastic and incredible hypotheses. Some scientists claimed that the remains of the legendary Lemuria were found on the island; others saw in the cyclopean stone buildings the fruits of the activities of the Inca colonizers, supposedly arrived on the island from Peru. There was also a hypothesis that Ponape was the outpost of the Egyptian pharaohs in the Pacific.

To the serious studies of Nan Madol, American archaeologists were able to begin only in 1958. From stories of the natives, they learned that during the occupation the Japanese conducted excavations in many parts of the island, found something and took them away. They talked about some metal objects, sculptures and sarcophagi. The Americans sent an official request to Tokyo, but the Japanese authorities replied that they did not know anything about it. 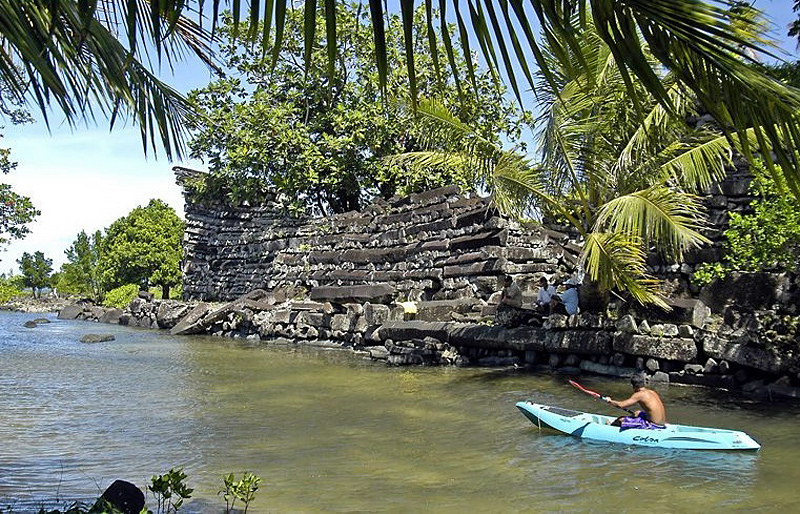 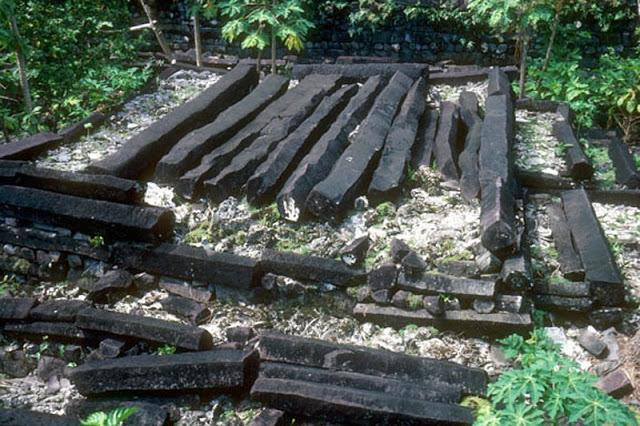 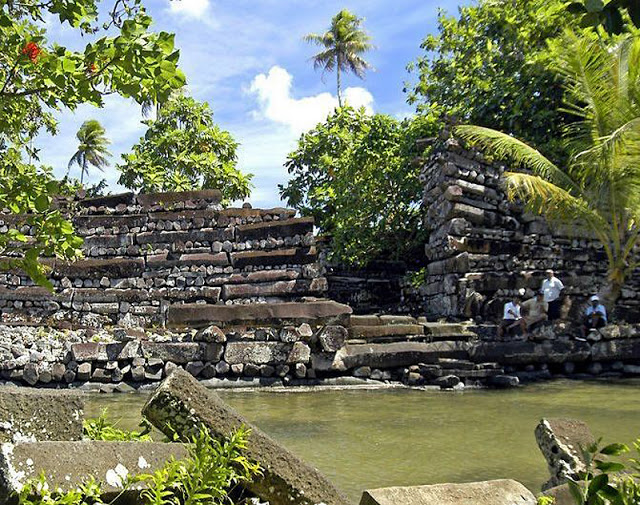 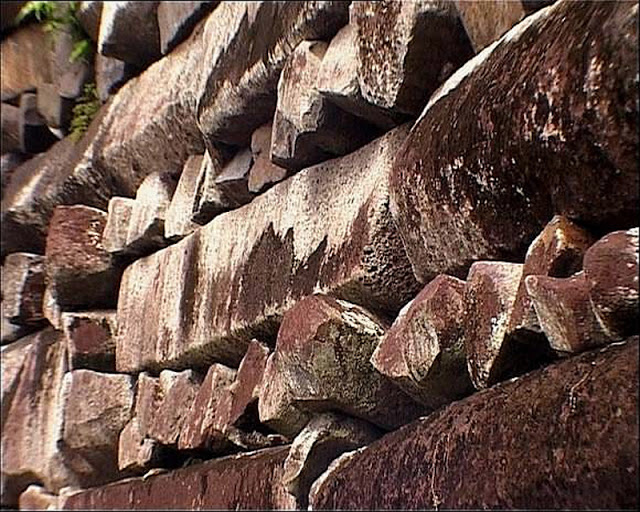 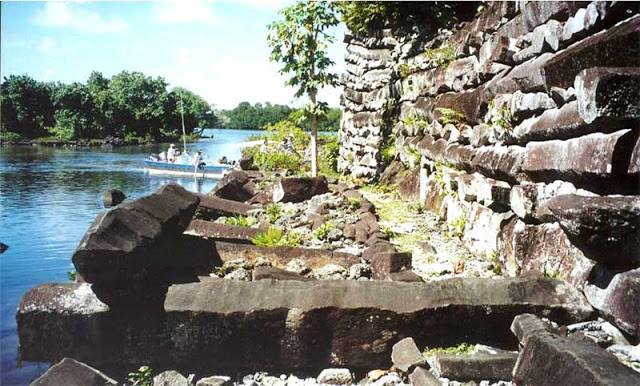 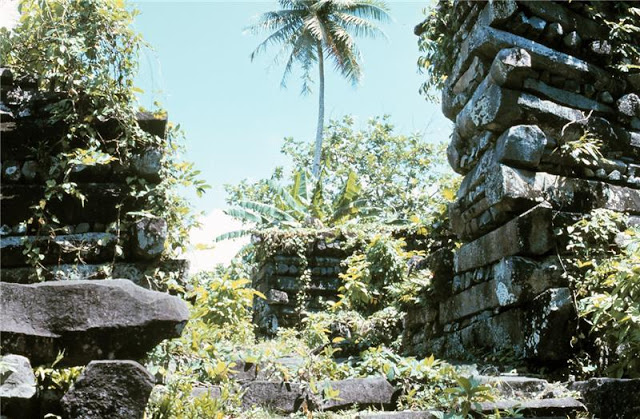 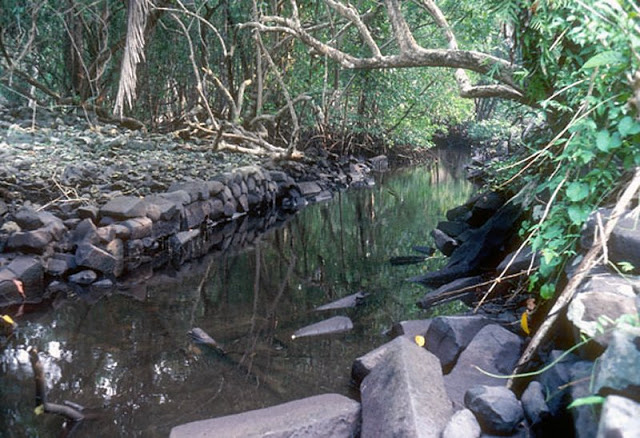 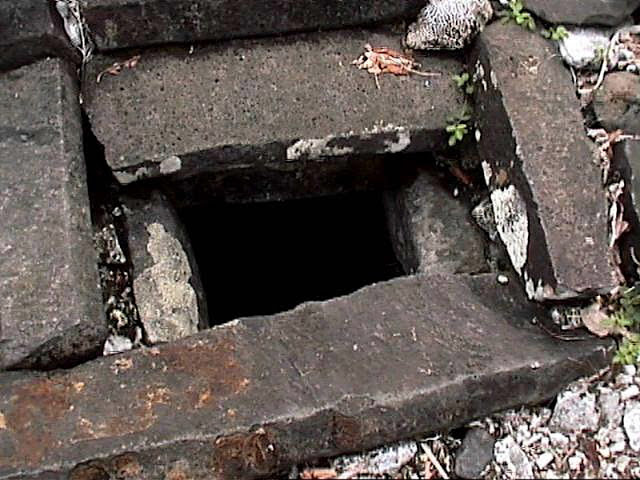 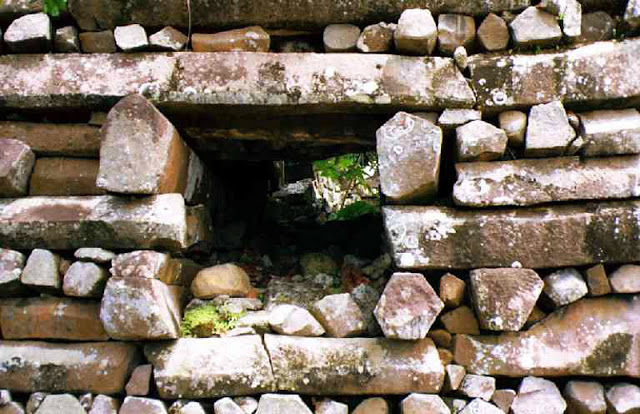 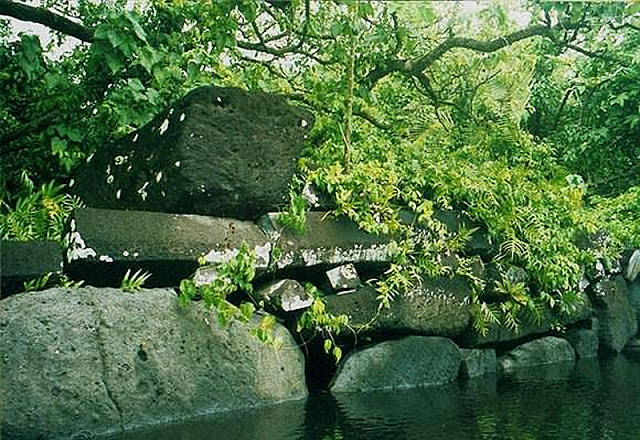 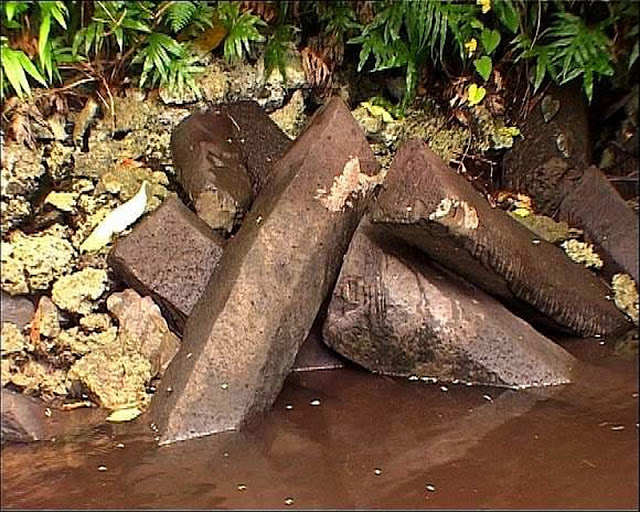 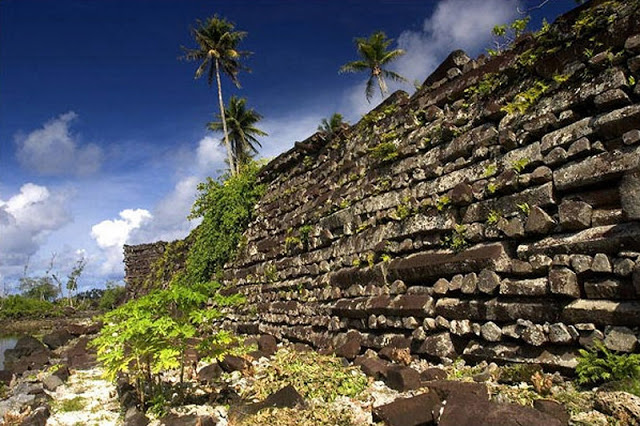 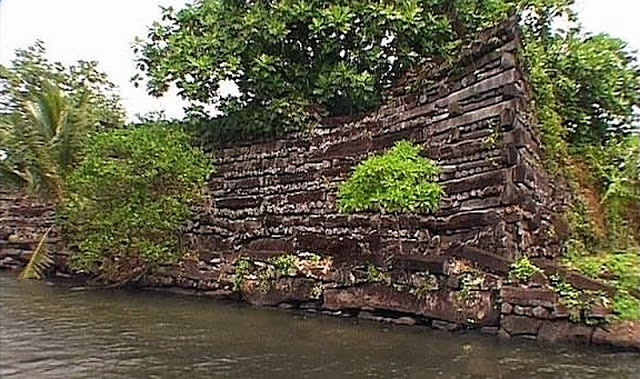 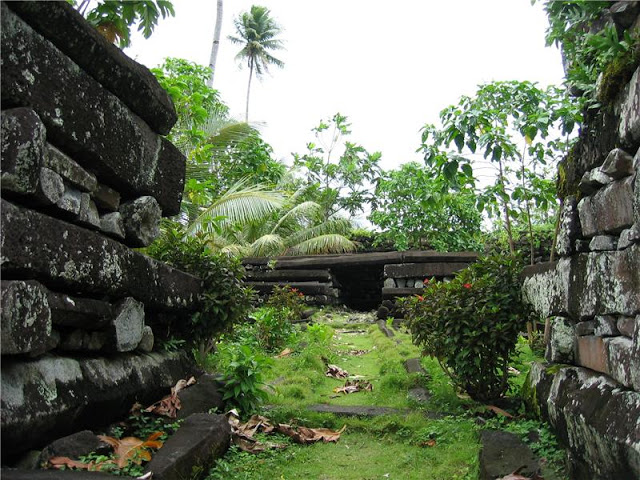 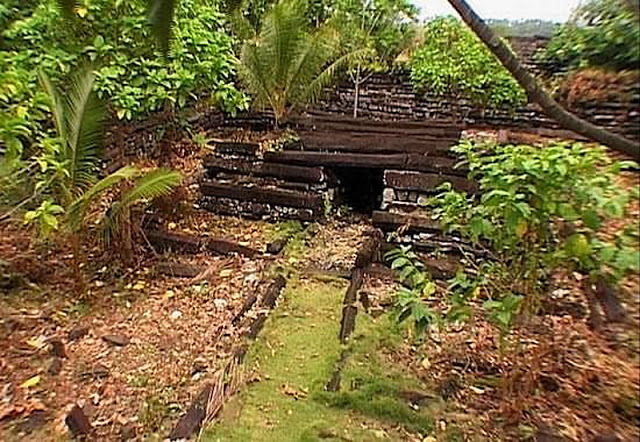