Who has constructed an ancient megalith to Gyobekli-Tepa? 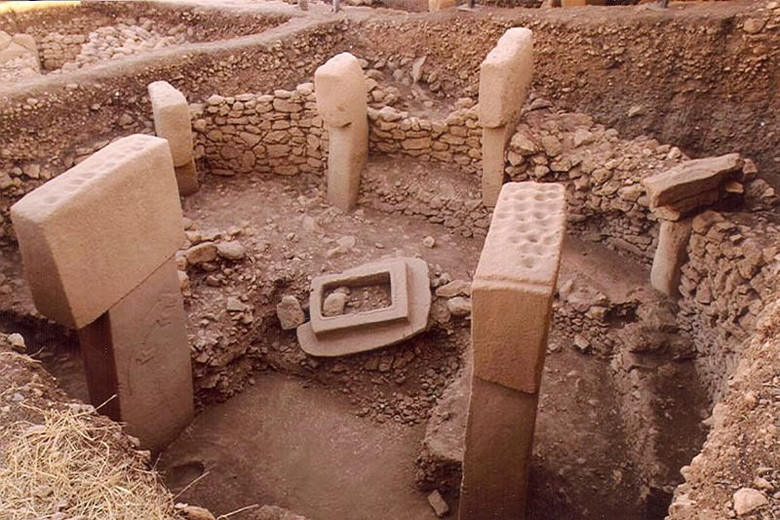 To Gyobekli-Tepa – the most ancient temple on Earth. According to scientists, it was constructed by nomads 12 thousand years ago, and only later near it there were settlements of settled tribes. But whether so it? The ancient megalith conceals in itself a set of the riddles which aren’t solved still.

“This place – a supernew star”

This roundish hill 15 meters high located in the southeast of Turkey in eight kilometers to the northeast of the city of Shanlyurfa, didn’t represent anything remarkable.

However, peasants from the village of Orendzhik which is near it, plowing up its slopes for crops of wheat, sometimes came across some stone blocks, but considered them as an annoying hindrance, dragging away and heaping outside the field, or used for economic needs.

In the 1960th years on the Big-bellied hill (it is so translated with Turkish to Gyobekli-Tepa) the American archeologists led by Peter Benedict appeared. They found some ancient artifacts (silicon knives, scrapers and other).

That the Muslim cemetery is nearby located Benedict assumed that this area serves as the last shelter for deceased for a long time and quite perhaps that the hill hides more ancient, Byzantine burials. However local authorities prohibited to archeologists to continue excavation.

In 1994 professor of the German archaeological institute Claus Shmidt rose by the Big-bellied hill. Its attention was drawn by the silicon cobble-stones heaped at hill top. Most likely, they were brought there from the arable lands by peasants, but professor assumed that it is procurements for production of stone instruments of labor in the large workshop which was located here satisfying requirements not only local population. 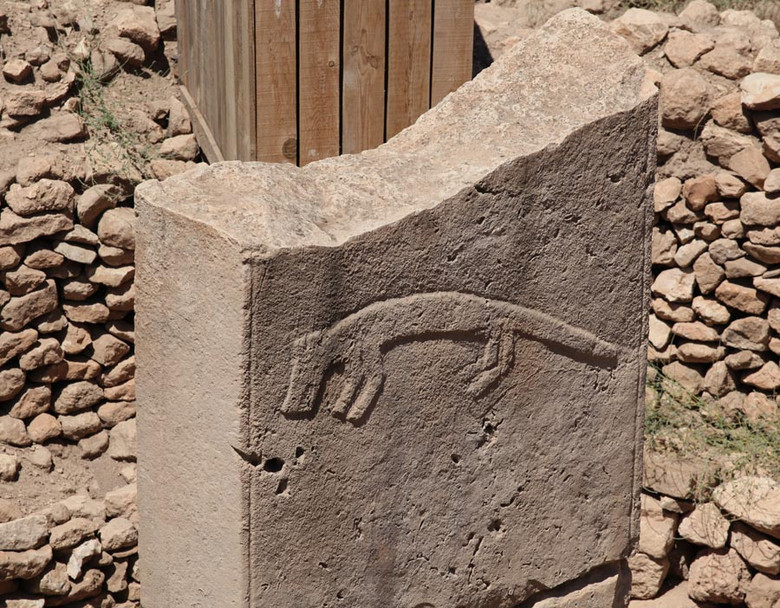 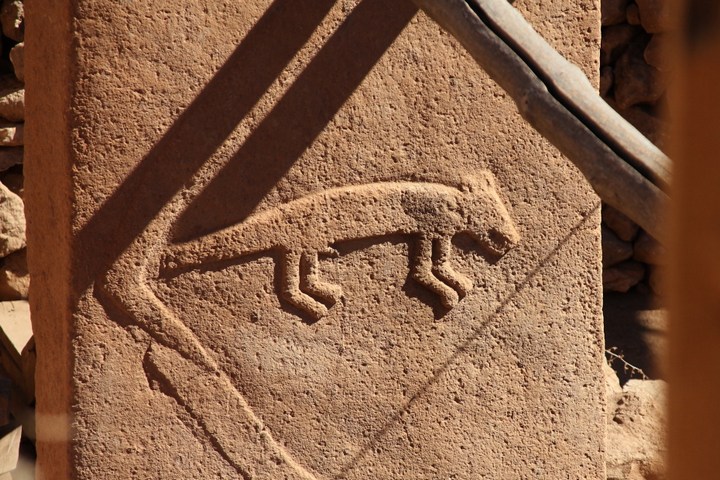 In these piles also finished products met. Schmidt was a little confused that the workshop was located at hill top – inconveniently to drag upward raw materials and to lower finished goods. But there was in Gyobekli-Tep some special attractive force.

– This place – a supernew star, – Schmidt in one of an interview told. – The first minute after its detection I knew that I have two ways: or to leave from here, without having told anybody words, or to carry out a life remaining balance here, on this excavation.

Having secured with support of the director of the museum Shanlyurf, professor got permission to excavation. It purchased the house in this city, having made it base of archaeological researches, and hired a crew from locals. Since then annually Schmidt spent two spring and two autumn months on Gyobekli-Tep.
Mesopotamia.

Already at the very beginning of excavation to a look of archeologists has opened several T-shaped calcareous columns covered with images of animals. Researches have defined that they are built about 12 thousand years ago, that is during Mesolith era. Thus, to Gyobekli-Tepa is the most ancient of the megalytic constructions, known on Earth. He is more senior than Stonehenge and the first cities of Mesopotamia.

Further excavation has allowed to define a configuration of this archaeological complex. By means of workers from local Kurds four round rooms with a diameter of 15-20 meters have been cleared away.

They represented the monolithic columns from three to five meters high connected by walls from the raw stone. The same columns are established in the center of these rooms. Floors are made of the burned limestone with low stone benches along walls. 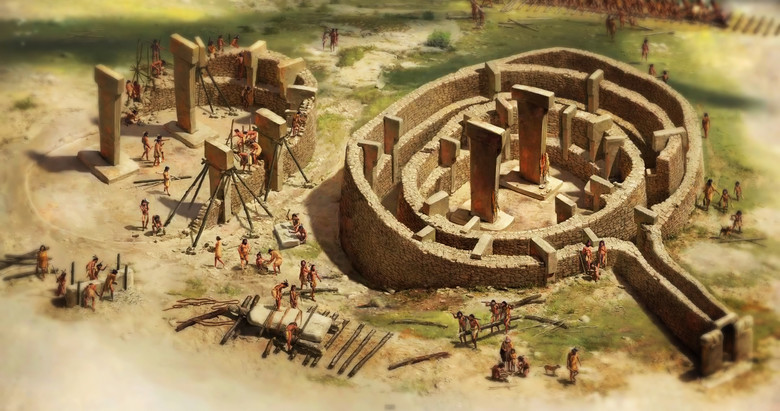 So presumably in the ancient time built this complex

The skillful carving decorating columns is unique. On them foxes, boars, cranes, lions, kites, snakes, spiders are represented… Also images of the beings similar to people, only faceless meet.

– I think that here we have faced the earliest images of gods, – Claus Shmidt said. – They have neither eyes, nor mouths, nor persons. But they have hands and they have palms. It are creators.

The majority of images is executed in the form of reliefs, but also three-dimensional sculptures meet. The figure of the lion who is going down a column is especially distinguished from them with the level of art skill. On some steles badges pictograms which didn’t manage to be deciphered yet meet.

It is established that the stone for this construction was got in the stone quarries located nearby. Here several incomplete columns which height reached nine meters are found. 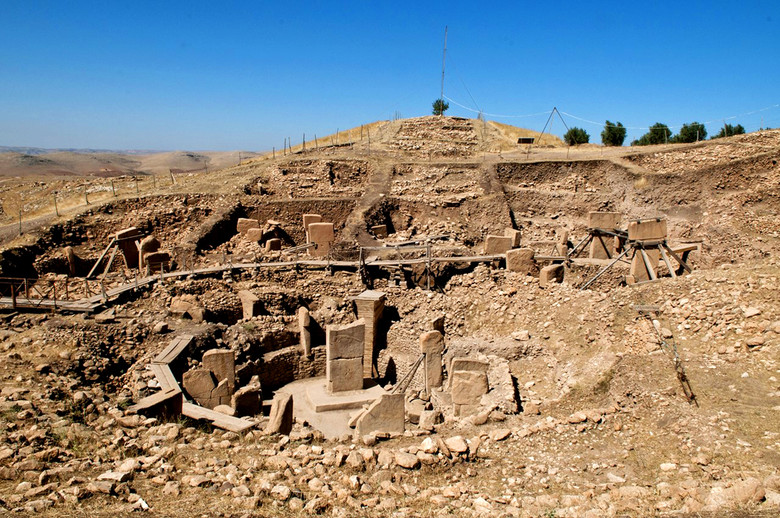 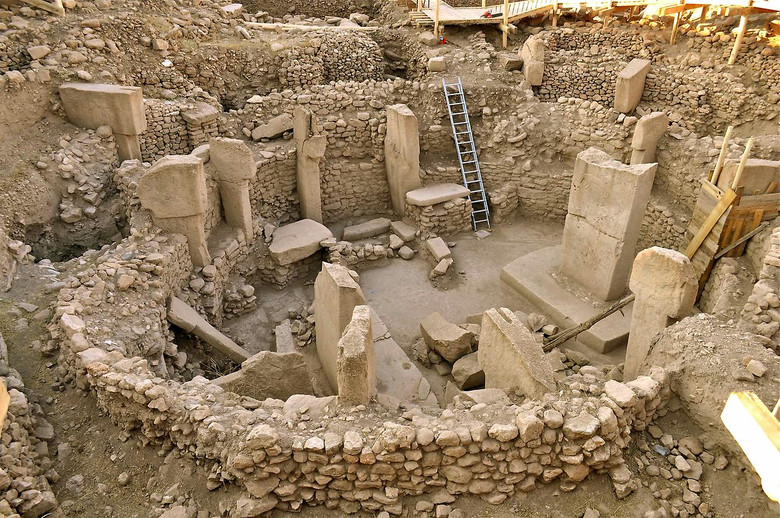 Unfortunately, it is impossible to tell in accuracy how these constructions in the whole look as their top part is destroyed by aeration and the locals who are breaking out stone blocks when processing the soil looked.

Now only 5% of all Gyobekli-Tep Square are dug out. According to geophysical surveys, in a subsoil of the hill 16 more similar constructions are hidden.

Heritage of an advanced civilization

There is a natural question: who constructed this megalytic complex and what functions it performed? If dating is right, then it is created in the Stone Age. If to trust the academic science, during that time primitive people collected wild-growing fruits, hunted animals, did rather skillful instruments of labor of flint, used fire.

They buried tribespeople, in burials jewelry – a beads and suspension brackets meets that says that they had free time which isn’t taken with searches and production of food. But at the same time they weren’t able to produce metal ware and ceramics yet, to build stone dwellings and protective walls, didn’t know agricultural industry. Even the wheel wasn’t invented yet.

In what way people of Mesolith, without having metal tools, could vytesat these multiton columns from a stone and decorate them with an intricate carving? Besides only to bring them from a stone quarry and to establish in vertical position, in the absence of the draft cattle efforts of at least 500 people are required. 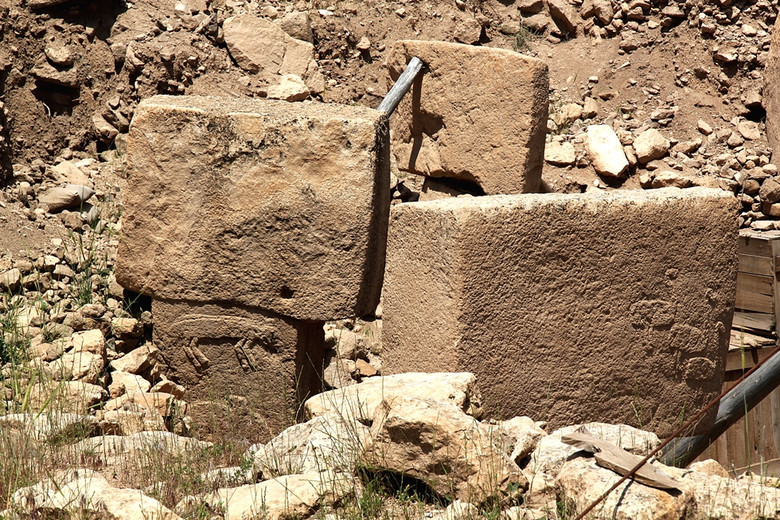 Such works required systematic efforts and availability of social hierarchy in which many people would be subordinated to one religious or military leader. So high level of the social organization isn’t characteristic of communities of collectors and hunters at all.

It is necessary to assume that Gyobekli-Tepa got a complex to people of the Stone Age from a certain advanced civilization. Perhaps, it were aliens, either representatives of the parallel worlds, or our far descendants who moved to the past on the time machine to create research base.

Perhaps, it was the terrestrial advanced civilization which died as a result of a planetary cataclysm. Their descendants who survived in this disaster, but lost knowledge and skills, having rolled down in the Stone Age, began to use a construction as the temple – the place of worship of gods personifying forces of nature.

Here sacrificed them animals and the captured enemies. That is to Gyobekli-Tepa, most likely, it was used only for religious rituals, people here never lived.

Over time with development of agricultural industry the nomadic conduct of life was replaced settled, in this area there were villages and the cities. But people still came to the ancient temple complex to pray and make a sacrifice to the gods, only even more often grain became these gifts. 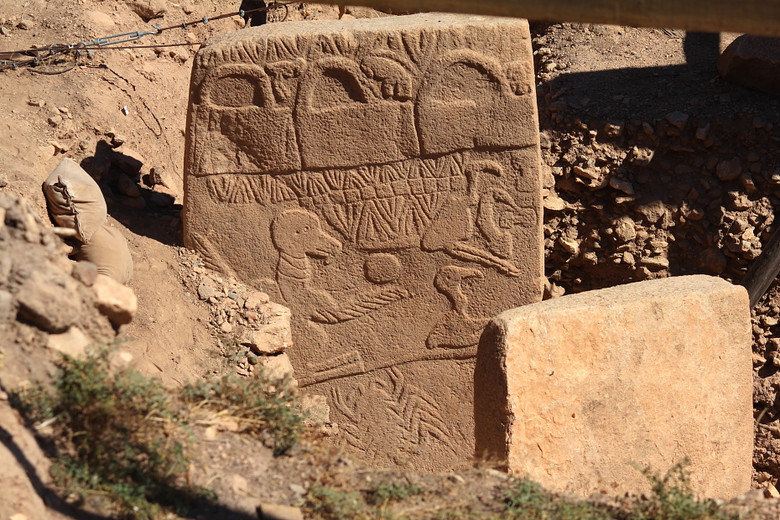 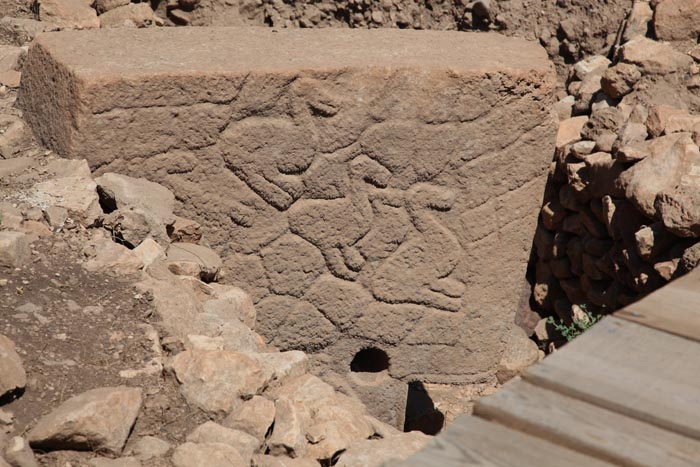 But once all was changed. Constructions to Gyobekli-Tepa have been partially destroyed, many relief images are cut off, and all complex is buried under a multimeter layer of the earth. Who and why it has made? This riddle haunts many years scientists.

Researchers have established that the temple complex has been covered with earth at the beginning of the VIII millennium B.C. Besides, proceeding from the official theory of evolution, primitive people had no opportunities to do so enormous work.

And why to them it was necessary? How many sanctuaries and temples have been thrown in later eras, and wind of time has razed them to the ground, having left only heaps of stones. 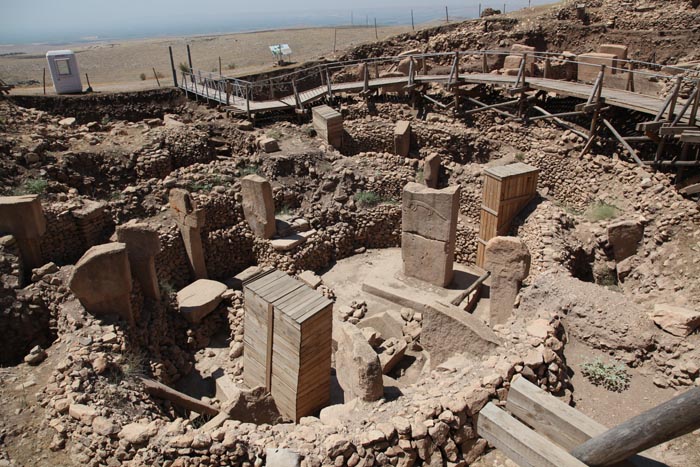 It is possible to assume that the temple was filled up by his true creators – to convey some important information to the mankind which has reached the level of development sufficient adequately to apprehend it. Obviously, this information contains in mysterious pictograms. It is quite probable that somebody will sometime read ancient messages to Gyobekli-Tepa.

But at first it is necessary to dig out all complex. And meanwhile after Claus Shmidt’s death in 2014 excavation has been suspended. And even after their renewal, by calculations of experts to clear away all to Gyobekli-Tepa, half a century will be required.