Why did the first people migrate from Africa? 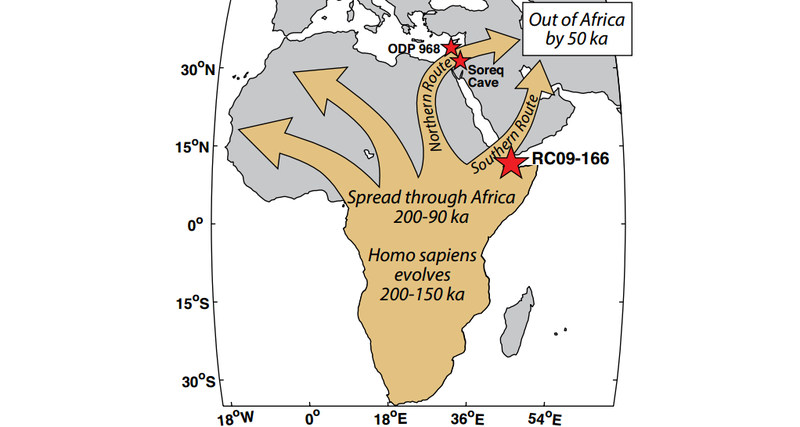 According to the data available to date, the first people appeared in Africa (earlier it was believed that about 100 thousand years ago, but just this year the border has shifted by another 200 – 250 thousand years.), And then our ancestors 65-55 thousand lei back migrated from Africa to Europe, Asia Minor and the Arabian Peninsula and from there settled all over the planet, having reached both Australia and the Americas.

The reason that prompted the first people to leave Africa and look for a new home is the climate, but what exactly the weather conditions pushed people to a great journey, remains unknown – in particular, because 60 thousand years ago our people did not record the state of the climate. To judge what was happening then in Africa, it is possible only on indirect grounds – for example, on the sediments on the seabed, as geologist Jessica Tierney (Jessica Tierney) from the University of Arizona and her colleagues did.

The group led by Tierney analyzed sedimentation of sedimentary rocks in the Gulf of Aden and estimated the dynamics of the content of alkenones – organic compounds that produce algae. The composition and quantity of alkenones varies depending on the temperature of the water. Alkenone scientists have reconstructed average water temperatures near the surface of the bay with a step of 1600 years for the last 200 thousand years. And the analysis of the content of organic sediments – leaves, carried away by the wind in the ocean and settled on the bottom – made it possible to obtain data on the amount of precipitation.

Combining data on temperature and humidity, scientists established that between 130 and 80 thousand years ago in Northeast Africa the climate was humid and warm, and the Sahara, now deserted, was covered with green forests. But in the period 75 – 55 thousand years ago there was a prolonged drought and a cold snap; genetics indicate that at the same time, the beginning of resettlement to Europe from Africa. Perhaps, it was desertification and cold snap that prompted people to search for new territories, Tierney said.

Despite the relative accuracy of assessing the state of the climate according to the method of Thiersley, her guesses about the reasons for the exit of mankind from Africa remain conjectures, since the datings of this event itself are very approximate. Recent studies indicate the presence of Homo sapiens in Sumatra already 63 thousand years ago, and in Australia – already 65 thousand years ago, which means that they should leave Africa before they are considered, other studies suggest that there were several waves migration, the first of which began the movement from Africa already 130 thousand years ago.