Why forested Sahara became a desert 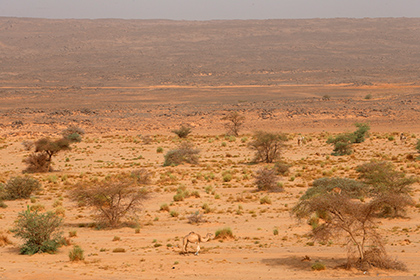 University of Arizona scientists have discovered why Sugar, which is a few thousand years ago was humid and covered with forests and Savannah turned into desert. It turned out that drought occurred due to global climate changes in the Northern hemisphere and spread of desert areas. The study is published in the journal Science Advances.

“Green Sahara” or subpluvial called Neolithic period (from about nine to three thousand years BC), when North Africa was dominated by the humid climate. In this region lived tribes that hunted for food, hunting and engaging gathering.

About eight thousand years ago people began to leave the Sahara, although it has become a desert much later. Scientists have suggested that the cause of this was severe and prolonged drought, however, there was no data confirming this hypothesis. Also unclear were the reasons for these climatic changes.

To solve this problem, the researchers studied marine sediments collected off the coast of West Africa. These sedimentary formations contain wax that covers the leaves of plants that grew during the “Green Sahara” and then was washed away.

Because of the chemical composition of the wax depends on the humidity of the climate, the scientists were able to follow the changes in precipitation over the last 25 thousand years. So, the rains in the Sahara was 10 times more intense than at present. However, about eight thousand years ago came the dry period, with the result that the people began to leave the Sahara. The reasons for this change, scientists say global climate cooling in Northern latitudes, called oscillation, Mesocco. Although it lasted a few hundred years, reducing vegetative cover and the spread of desert areas increased drought duration to a thousand years.

Oscillation, Mesocco is believed to have been caused by the reduction of ice cover in North America and descent of cold fresh water from lake Agassiz and other glacial lakes in the ocean. This led to a decrease in the influx of warm water from low latitudes of the Atlantic in the high and cold in the Northern hemisphere.