Why our ancestors made each other openings in a skull 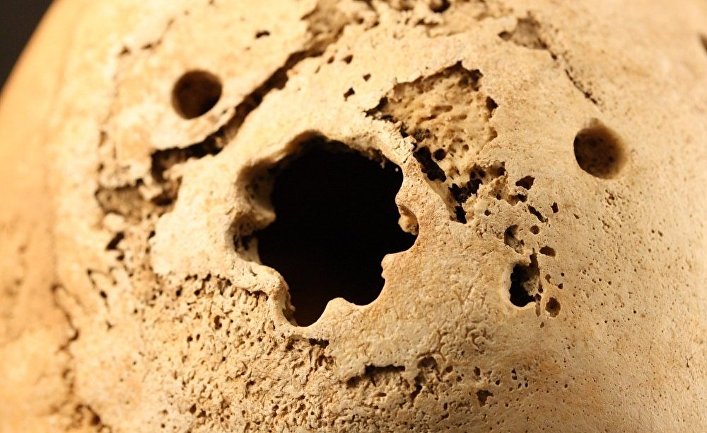 Thousands years ago people learned to perform surgery on opening of a skull, or trepanation. The observer of BBC Earth tells about a possible purpose of this chilling procedure.

Since an extreme antiquity representatives of the different people practiced trepanation — rough surgical intervention to which they in a skull of the living person make an opening.

This transaction was performed by means of drilling, a section or a scraping by the sharp tool.

Today during archeological excavations worldwide from under the earth the set of skulls with trepanation traces is taken.

Strange, but scientists can’t come to a consensus concerning that why our ancestors performed this operation.

Reports of anthropologists on the trepanations which were carried out in Africa and Polynesia in the 20th century give the grounds to assume that at least in these cases transaction was intended for treatment of a headache — for example, arisen owing to an injury of a skull or a neurologic disease.

Possibly, with the same purpose trepanation was done also in ancient times. On many trepanned skulls signs of mechanical damages or neurologic diseases, often near a trepanatsionny opening were found.

Nevertheless, researchers suspect for a long time that ancient people carried out trepanation not only in the medical purposes, but also as a ritual.

The very first certificates of carrying out transactions on opening of a skull belong to the period about 7000 years ago. Trepanation was practiced in various parts of the world: in Ancient Greece, North and South America, Africa, Polynesia and in the Far East.

By the end of the Middle Ages most of the people refused trepanation, however in several parts of Africa and Polynesia which are torn off from a civilization these operations were performed up to the beginning of the 1990th years.

From the moment of the publication of the very first scientific research on trepanation (in the 19th century) scientists continue to claim that ancient people sometimes carried out trepanation to let in spirits a body of the person or, on the contrary, to expel them.

Besides, trepanation could be a part of a ceremony of initiation.

Nevertheless it doesn’t have reliable confirmations practically. It is almost impossible to exclude that trepanation was moved for the medical reasons as some diseases of a brain don’t leave any marks on a skull.

However, archeologists found one of the most convincing proofs of performing ritual trepanations in one of corners of Russia.

This story began in 1997. Archeologists carried out excavation on the ancient place of burials near Rostov-on-Don.

On the place of excavation from 20 separate graves remains of skeletons of 35 people were taken. Considering a burial method, archeologists determined that they can be carried to the period from 5000 to 3000 years BC, known as halkolit, or a Copper Age.

Skeletons of five adults — two women and three men, and also the child from one to two years and the teenage girl were found in one of graves.

Scientists found several skeletons of ancient people in one grave earlier, however in this case the find nevertheless was unusual: skulls of two women, two men and the girl underwent to trepanation.

In each of skulls there was one oval opening width several centimeters with skobleniye signs at the edges. In a skull of the third man have found deepening which was obvious work of the person, however this opening wasn’t through. Only the child’s skull was untouched.

The remains taken from graves Elena Batiyeva, the anthropologist from Southern Federal University in Rostov-on-Don has researched. She has at once defined that openings in turtles are result of trepanation, however has soon understood that these trepanations weren’t usual.

All of them have been made practically in the same place — in a point under the name обелион. Obelion is located in the top part of a skull closer to a nape, approximately in that place where hair usually collect in a high tail.

Less than 1% of all registered trepanations have been carried out above an obelion. Besides, Batiyeva knew what the ancient people living in the territory of Russia, such operations did even more rare.

At that time one registered trepanation case in this point was only known to her. The skull has been taken from under the earth in 1974 near the place of her current excavation.

It is absolutely clear that even one skull with trepanation around an obelion is an outstanding find. But at their Batiyeva was whole five, and all of them lay in one grave. This case was and still remains unique.

To the fact that trepanation around an obelion meets seldom there is a simple explanation: it is very dangerous.

Obelion is located directly over the top saggitalny sine where the blood flowing from a brain accumulates before getting into the main taking-away brain veins.

Opening of a skull in this place threatens with plentiful bleeding and death.

It means that the people living in the territory of Russia in the Copper Age had to have good reasons to perform similar operations.

Nevertheless, on one of skulls traces of damages or a disease which would take place both to, and after trepanation haven’t been found.

In other words, everything looked so as if all these people have transferred trepanation, being absolutely healthy. Whether this operation has been connected with any ritual?

It is very interesting question, however Batiyeva had to refuse further searches of the answer.

She needed to investigate still a set of the skeletons found by all southern part of Russia, and she couldn’t distract from the main objective for the sake of several skulls whatever mysterious they were.

Before giving up, Batiyeva has decided to check unpublished archaeological data on Russia to find out whether other atypical skulls with trepanation around an obelion which for any reason haven’t been registered have been found.

To her surprise, such skulls was whole two. They belonged to young women and have been found a few years ago: one in the 1980th, and another — in 1992.

Both skulls have been taken from under the earth less than in 50 km from Rostov-on-Don, and on one of them medical prerequisites for trepanation weren’t revealed.

So, Batiyeva had eight unusual skulls found in rather small territory in the south of Russia and belonging to people about one age.

In ten years was revealed some more.

In 2011 the international group of archeologists researched 137 human skeletons taken from under the earth in three separate burials relating to the Copper Age.

All of them have been found in Kabardino-Balkaria, in the hilly terrain in the south of Russia, approximately in 500 km on the southeast from Rostov-on-Don, near modern border with Georgia.

Archeologists didn’t set before themselves the purpose to find trepanations. Their task was to find out the general state of health of the ancient people inhabiting this region.

Nevertheless, they have found openings in nine of 137 skulls.

Five of them represented standard models of trepanation. Openings have been made in various points in a forward and side part of a skull, and on all skulls signs of mechanical damages have been found.

It gave the grounds to assume that trepanations were carried out for elimination of consequences of injuries.

However on one of the remained four skulls of signs of damages or diseases wasn’t. Moreover, on each of them trepanation has been carried out directly over obeliony.

It has absolutely incidentally turned out that the German anthropologist Julia Greski entering into group of researchers was familiar with work as Batiyeva describing the unusual trepanned skulls found in the Rostov region.

Then Greski, Batiyeva and other archeologists have combined the efforts to describe all 12 skulls from the South of Russia trepanned around an obelion.

x the research has been published in April, 2016 in the scientific magazine American Journal of Physical Antropology.

Irrespective of the place of detection, 12 similar skulls already represent an unusual find. However the fact that all of them have been found in one corner of Russia, meant that, most likely, they have something the general.

If between them there was no communication, probability that such number of rare trepanations would meet only in the south of Russia, would be extremely small.

Greski, Batiyeva and their colleague declare that in spite of the fact that it is difficult to prove their conclusions, the congestion of such non-standard trepanations gives the grounds to assume that in the south of Russia some kind of center of a ritual trepanirovaniye could be located.

Maria Mednikova, the leading researcher of Institute of archeology of RAS — the expert in the field of the trepanations taking place in the territory of Russia.

She is sure that trepanations in certain dangerous areas of a cranium could carry out for achievement of some kind of “transformations”.

According to her, people did it, thinking that unique abilities which ordinary members of society didn’t have will get.

We can assume only why these, most likely, healthy people had to endure the trepanation made in such unusual and dangerous way.

However openings say a lot of things to us about how fate of people after operation was.

One of 12 skulls belonged to the woman who hasn’t reached age of 25 years whose skeleton has been found on the place of burial near Rostov-on-Don. On him there were no healing signs, and it is possible to assume that she has died during operation or soon after her.

Nevertheless, the others, apparently, have more or less safely endured trepanation. At the edges the trepanatsionnykh of openings the new bone tissue has begun to grow, however it hasn’t filled all opening.

On three of 12 skulls only insignificant signs of healing at the edges of a trepanatsionny opening have been found. It means that after operation these people have lived from only two to eight weeks.

Two of them were women from 20 to 35 years, and the third was an elderly person from 50 to 70 years whose gender didn’t manage to be assigned.

On other skulls of an opening of a thicket it is much better. Based on modern knowledge of regeneration of a bone tissue, it is possible to draw a conclusion that after operation these people have lived not less than four years.

Among eight survivors there were all five of mass burial near Rostov-on-Don whose unusual trepanations have for the first time drawn Batiyeva’s attention nearly 20 years ago.

Two men, two women and one teenage girl could live several years, having an opening around an obelion.

The girl who, judging by a skeleton, was from 14 to 16 years has undergone trepanation no later than 12 years, and even much earlier.

Nevertheless, it is impossible to exclude that these 12 people nevertheless suffered from diseases or injuries of the head. If this is so, then trepanation has helped at least eight of them.

However it is also possible that Batiyeva and her colleagues are right, and these people have undergone trepanation in the ritual purposes.

If this is so, we can only guess what advantage — real or imagined — they have received from it.