Why the British brutally killed domestic cats and dogs 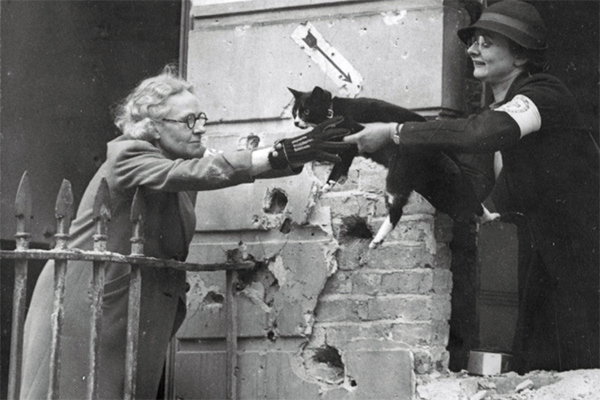 In September 1939, after Nazi Germany declared war on Great Britain, the British put to sleep hundreds of thousands of dogs, cats and other domestic animals. Why would they do that? Historian Hilda Kean (Hilda Kean) talks about this in an article published in the journal European Review of History.

At the beginning of the Second World War, thousands of British children were evacuated. The press recommended that parents regularly write to them about their favorite pets: “If your children have pets at home, write and tell them what you are going to do with pets, regardless of whether you sent them to the village to friends or to another safe a place. Many children feel a great responsibility for their pets and are worried about them. ”

Parents did write such letters. One of them was sent to the girl Beryl, who was supposed to go to Canada on the ship. The letter was the “signature” of Chammy’s dog – the imprint of her paw. Alas, Beryl never reached Canada’s shores: a torpedo hit her ship, and it sank. 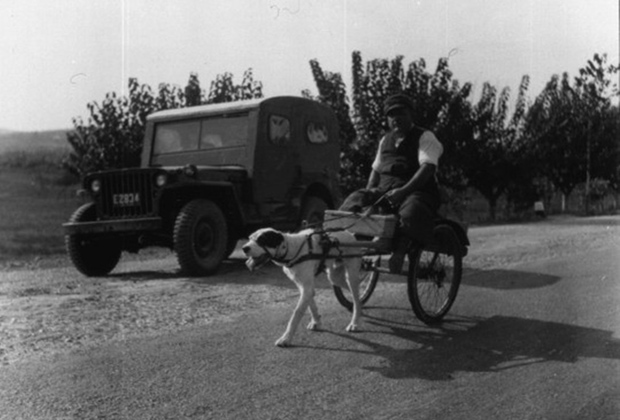 British veteran of World War II on a dog sled

The stories of the evacuated children were in stark contrast to the articles on German after, which, after leaving the war, was thrown by a dog named Teddy Bear. The Daily Mail wrote: “This is what Britain is fighting – with the cruelty of Nazism, which knows neither justice nor human feelings, even when it comes to their own pets.”

In the same week, only in London, more than 400,000 dogs and cats were killed by the will of the owners-that is, about 26 percent of the total number. This is more than six times the number of citizens killed by bombing. The advocates of animal rights called this event “the September Holocaust.”

There are many documentary evidence of how the war affected people and domestic animals. Among such examples are about a million cows, pigs and laying hens slaughtered in Denmark due to the lack of imported feed; The sounds of the slaughter of cattle abandoned by refugees who heard the Germans entering Paris on June 14, 1940.

It is interesting to consider the attitude of the British to animals in the context of the mythologization of the war of 1939-1945. In the UK, it is often called a “people’s war”, and citizens of the country are shown exclusively on the positive side.

What happened in September 1939? It is important to understand that not a single bomb fell in the UK until April 1940. The British government did not make decisions about the need to put the animals to sleep – the citizens themselves carried their pets to slaughter.

On September 7, 1939, the Times wrote about the destruction in the veterinary centers of thousands of cats and dogs and what people bring with each passing day even more. The Royal Society for the Prevention of Cruelty to Animals (RPSCA) was forced to double the staff in its clinics and hire employees for the night shift.

The people’s veterinary outpatient clinic (PDSA) was, according to witnesses, literally piled up by dogs and cats, who were brought to sleep. Vetclinics, animal welfare societies and private veterinarians could not bury so many animal corpses on their own, so the PDSA provided them with a meadow not far from the organization’s building, which, according to her report, found the last shelter for about half a million cats and dogs. Employees of the National Dog Protection League (NCDL) complained that the chloroform stocks (which were used, including for painless killing of animals) are running out.

In war as in war

The mass killing of animals in September 1939 was not unprecedented. Twenty years before, during the First World War, some members of the British Parliament raised the question of the uselessness of domestic animals. For example, in 1916, conservative parliamentarian Ernest Pretiman talked about dogs: “Undoubtedly, reducing their number in urban neighborhoods is necessary, since here they do not perform any useful function.” His opinion was agreed by Sir Philip Magnus, an ardent supporter of vivisection, who advocated the prohibition of keeping dogs in the city (however, unsuccessfully), arguing that it was “unhygienic.”

Despite appeals for mass killing of animals in the House of Commons, a decision on this was never adopted. The British press agreed with the need to keep pets, but condemned citizens who allegedly spent on them precious food in wartime.

Environmental organizations were not in agreement with such statements. NCDL wrote: “Those who hate dogs are not guided by patriotism and the desire to preserve food resources for people; They use the state of the country for selfish and cruel purposes. ” John Sandeman, the owner of the dog, published in the newspaper a letter in which he assured that his pet eats mostly cartilages and skin, which still had to be thrown away, and accused parliamentarians of ignorance. There were other letters in which the owners of animals had to justify their loyalty to the four-legged pets. Nevertheless, there were also such masters who went to the decisive euthanasia of pets “according to the laws of wartime.”

A month before the “September Holocaust”, the National Committee for Animal Precautions for Air Pollution (NARPAC) was established, which was to advise the authorities on all “problems relating to animals in wartime”. Despite his recommendations, the Ministry of the Interior did not open special evacuation centers for pets and did not allow them to be taken to the bomb shelters.

At the same time, the state conducted active work against the destruction of domestic animals. A NARPAC statement said that such actions could lead to uncontrolled reproduction of rats and mice, and this, in turn, will contribute to the emergence of epidemics of deadly diseases.

Some historians suggest that the mass euthanasia of domestic animals caused a general panic at the beginning of the war – this was reported by many editions of the time. For example, the Times wrote about a rapidly spreading rumor that keeping cats and dogs soon will be banned, which means that they should be disposed of as soon as possible. The publication hastened to refute the rumor, writing that it “does not have a drop of truth.”

Psychologists and psychiatrists noted that civilians, unlike regular military personnel, do not know what air raids are in reality, and will simply stay in their homes in the hope that the danger will bypass them. Such behavior, experts wrote, is fraught with the manifestation of negative emotions not with respect to the enemy, which is far away, but in relation to those around and close.

Historians who assume that panic played a role in the lulling of animals are also cited by the authorities’ statements made in previous years. In 1937, the Imperial Defense Committee published a forecast that 1.8 million people will be wounded in the first two months of the war, of which one-third will be killed. A year later, the agency announced that 3500 bombs would be thrown onto London on the first day of the conflict. These apocalyptic predictions were not confirmed. The number of patients with mental illness did not increase much, there was no mass panic as such. People were building up military life, the heads of families tried to act according to the situation. The sleep of the animals was included in the list of such actions: hang tight black curtains, send the children to the village and, of course, get rid of the cat or dog. All this fuss created the illusion of control over a situation in which people put themselves first and home, and then they already thought of compassion for pets.

Thus, it can not be explained by a panic or the desire to save animals from future suffering. To understand what happened, it is worth looking at specific examples.

The owner of a black labrador named Angus, a doctor, was drafted into the army, and his favorite was left without a home. He, like many other dogs with a similar destiny, was helped by Nina, the Duchess of Hamilton, a well-known activist of the Society for the Protection of Animals and the Counteraction to Vivisection, which called on citizens to bring their pets to her.

Angus, like other dogs, who came to the duchess, was successfully evacuated. On their collars was a tag with a nickname – after the war, the owners were going to return their pets. However, not everyone did it: by the time of the end of the fighting the dogs were old, many breeds just went out of fashion.

A well-known art critic and a great dog lover Brian Sewell (Brian Sewell) told the story of the murder of a Labrador named Prince, which shows another type of relationship between a man and a dog. Stephen Brian’s stepfather shot the Prince as soon as the family was evacuated, leaving the animal’s body at the water’s edge to be washed away by the tide. “I did not cry, as I am crying now, but I perfectly remember the feeling of cold, persistent disgust [towards my stepfather],” he recalls. 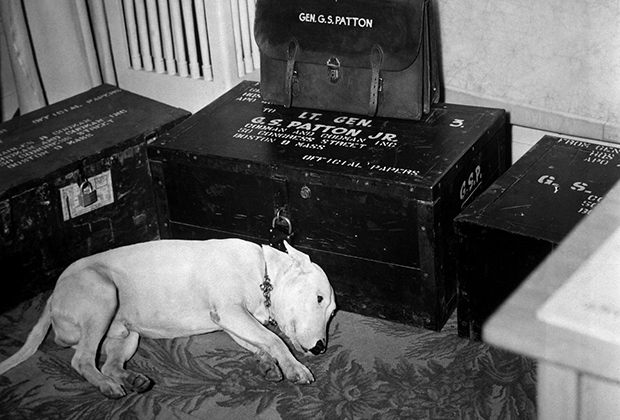 Robert did not have a close relationship with the dog – they were with Brian. My stepfather was not called to the front, there was no announcement of an urgent mass evacuation, the death of the dog was not due to anything other than Robert’s desire to get rid of him.

Mass destruction of pets is difficult to explain from a geographical point of view. Residents of the suburbs, who seemingly had no reason to fear bombing, also did it.

In the diary of 18-year-old Daphne Pennefather (Daphne Pennefather) from the county of Surrey describes the short life of her dog. He appeared in the family in May 1939 and was killed the same autumn in preparation for the transition to martial law. The family uprooted the rose garden, smashed the vegetable garden in its place, invited the evacuated children to tea and “took care” of the dog of their daughter.

Many of those who killed their pets soon regretted it. As they said in a radio program dedicated to the work of NARPAC, “destroying a loyal friend means allowing the war to crawl into your house.” Polls and interviews conducted by state sociological organizations confirmed that it was so.

Mass killings of domestic animals were criticized by animal welfare societies and individual activists. These actions were not considered by citizens and the state as inevitable in wartime. The owners who lied animals were not in the majority. As Nina, the Duchess of Hamilton wrote, her pets evacuated with her help were extremely dear to their owners, who found themselves in a desperate situation: “For some, cats and dogs were the only friends, for others who had children they were the same children.”

“The September Holocaust” quickly erased from the collective memory of the British. Should people remember it as part of a war? Probably not. These actions were part of the normative behavior towards “human friends”. On the one hand, they were “family members”, and on the other hand, they were “different” – those who are easier to sacrifice in a stressful situation.