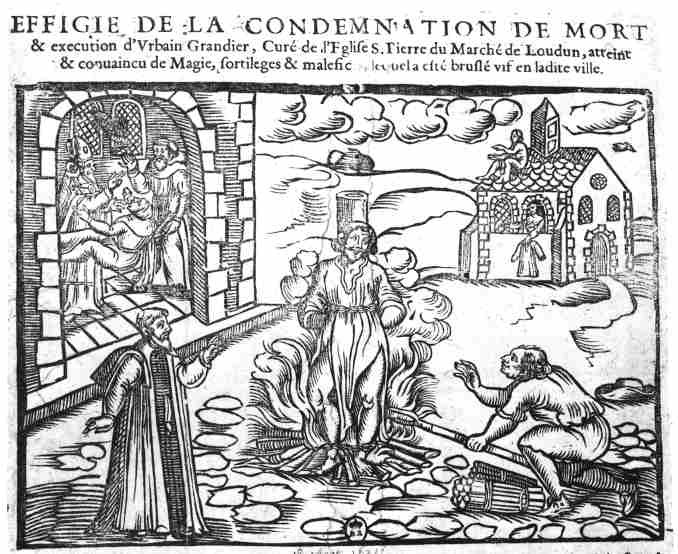 Europe XIV—XVII centuries became one big fire. Thousands, according to some estimates, hundreds of thousands of people have been charged with a special ecclesiastical court in cases of heretics by the Inquisition in connection with the devil, after terrible tortures burned alive.

France, which was hit by a terrible epidemic called “demon possession”, one of the first opened the hunt on the heretics. Among the most famous epidemics include cases of collective hysteria in the convents of the cities of AIX (1609), Lille (1610) and Louviers (1643). The fight with Satan was deemed a matter of national importance, and witch hunt took an incredible extent.

Especially the famous “demonic” epidemic which broke out in 1631, in the convent of the Ursulines in Lucene. She became widely known and caused excitement throughout France thanks to the trial of the priest urban Grandier.

Urban Grandier received an excellent education at the Jesuit College in Bordeaux. He was a scholar and a talented man and an outstanding orator. Learning and the gift of preaching helped him to move quickly, and at the age of 27 he became a priest in one of the temples of the city of Loudun. Youth and professional success is infatuated with Grandier. One of his contemporaries described him “as a person with an important and majestic posture, gave him a haughty look.”

During his sermons, “advanced” the priest allowed himself to make fun of the monks he hated orders of the Capuchins, Carmelites, hinting at their dark deeds and sins. Erudition and the gift of preaching found an echo in the hearts and souls of local residents, who gradually moved away from other city parishes and was directed to preach to Urbano Grandier.

However, despite the attractiveness and education, the priest led a far from perfect life. He was a big hunter to care for young girls. So, urban has seduced the daughter of his close friend, the Royal Prosecutor TREN-Kahn, and she bore him a child. Grandier was a member of one of the daughters of the Royal Advisor rené de Brou, whose mother before his death entrusted him to his daughter, asking him to be the spiritual guardian of the girl.

It is this moral instability has not allowed Grandier in 1631 to take up the post of priest of the prestigious convent of the Ursulines, where the women of the aristocratic families. Preference was given to the father. that Urbana was personal: he endlessly criticized his dissolute behavior. Soon this hostility degenerated into open protivostojanie. It came to the Episcopal court, which sided with the Minion.

Grandier, in the opinion of the citizens, decided to resort to witchcraft, which had intended to seduce several of the nuns and join them in a love relationship. He hoped that when a scandal is discovered, the blame fell on the Abbot’s Minion is the only man in the convent. Eyewitnesses claim, and that Grandier tossed in a monastery garden zagovornye thing is a small pink branch.

Before the others felt the presence of an evil spirit abbess Anna Desang. After her damage was found to have sisters Nogaro and Mrs. Sisili, a cousin of cardinal Richelieu.

In the spring of 1632, in the city there were already rumors that the nuns something going wrong. They jumped at night from the bed and, like sleepwalkers, wandering around the house and on the roofs. At night it was haunted. Some night, someone was severely beaten, after which they remained on the body signs. Others felt that it and day and night always someone touches that plunged them into horror.

They felt the presence of the devil, I saw the dreaded “animal-like faces, felt like to touch them “vile, clawed paws. They have convulsions, they went into convulsions, lapsed into a lethargic condition, catalepsy.

The Abbot Mignon, learning about these mysterious phenomena in his ward the monastery was overjoyed. It gave his hands a powerful weapon to combat urban Grandier. The Abbot claimed that his nuns self-inflicted damage that they are possessed by the devil.

Not wanting to take sole responsibility in this delicate matter, he resorted to the help of father Barre, who was famous for his learning and high virtues, with whom he embarked on the rite of exorcism (exorcism).

Minion also considered necessary to notify about all events of the civil power. A local judge and civil Lieutenant witnessed the lunacy of the nuns, they were also shown scenes of their communication with the devil.

Urban Grandier, realizing what the storm is going over his head, tried to ward off trouble. He filed a complaint, claiming that he slandered. Thanks to Bishop de Sordi he managed to hush up the case. The Bishop met Grandier and banned. to produce the rites of exorcism in a monastery, entrusting them to the father Barre, he also forbade anyone else to intervene in this matter.

But the clergy who performed the rites of exorcism, is constantly spread among the people rumors about what’s going on in the monastery. People began to demand the punishment of the altar, surrendered, as they say, the devil. Ludensky news of the incident finally came to Paris, and then to the king himself.

King Louis XIII would have reacted to it with restraint, but he obviously weighed the all-powerful cardinal Richelieu, who disliked Grandier. Young, arrogant and cocky priest wrote a lampoon. Irritated Richelieu reacted to her abuser without mercy.

In Loudun was sent by the provincial intendant Laubardemont, giving it the broadest powers. Laubardemont zealously took up the execution of the order, as the abbess of the monastery was his cousin. Besides, he was an ardent and devoted admirer of Richelieu and knowing about the pamphlet, decided well to take up urban.

Meanwhile, the manifestations of obsession at first abated, and then, in the summer of 1633, again violently renewed and spread throughout the city. Everywhere there were women who showed signs of possession. Rumours of the possessed in Lucene dispersed throughout France.

Many came from Paris, Marseille, Lille and other cities, to look at the “acts of the devil.” Even the king’s brother, Gaston of Orleans, arrived specifically to see the possessed and to be present during the process of expulsion of the demons from them.

On the basis of the testimony of the nuns, the rumor continued to blame all of this on Grandier, people said that he made an Alliance with Asmodeus. Even found a letter to him, signed Asmodean, in which he promises to torment the sisters in Lucene.

In December 1633 Laubardemont arrested Grandier, adapting to its contents a special room in Lucene. The Windows in the prison laid bricks, and a door made of iron bars for fear that the devils can come to his rescue and release from prison.

Convened a group of doctors who were studying the phenomena of possession. The Commission decided that the devil is obliged to tell the truth if his charge in order. Those who did not believe in this thesis could extend to court as accomplices wizards or heretics, disrespectful to speak ill of the Catholic dogma.

In any case, was relevant to post at all intersections, the prohibition under pain of corporal punishment and a large monetary fine to speak ill of the judges, the caster and the possessed. These threats led to the desired result. No one dared to come to the defense of Grandier. The testimony of the demoniac was recognized as having the force of legitimate proof.

It is extremely important to denounce the sorcerer was considered the “mark of the devil” — special places on the body where there was no sensitivity. Doctors appointed by the Commission, found on the body of the unfortunate places which are insensitive to the prick of the needle had to affirmatively indicate agreement to them by Satan.

One of the members of the Commission, having heated the iron red-hot crucifix, carrying it to his lips Grandier that every time her head away. For the record, that the magician did not dare to kiss the cross. This eliminated all doubts in that Grandier is a warlock.

Wanting to prove his innocence, Grandier asked permission to conduct an exorcism. However, when the possessed saw him, they came in terrible excitement. They jumped, rolled on the ground, screaming, mewing, barking. Surrounding the priest, the nuns rushed at him, threw him on the floor, began to tear his clothes, to bite. At the sight of this spectacle, the crowd Packed into the Church, was horrified. The inquisitors, with great difficulty, managed to snatch Grandier and the possessed have to take to jail.

The court, armed with the data, obtained by investigation, and also learned from the testimony of the demons during spells and at a confrontation, considered the case of Grandier and found it quite convicted of witchcraft, dealings with the devil and heresy. 18 Oct 1634 a sentence was passed, according to which urban Grandier was to be burnt at the stake.

After the verdict Grandier was asked to give accomplices, promising to mitigate punishment. He replied that he had no accomplices there. Someone from the exorcists gave him a warning to sensitive speech, which drew tears from all present, one only urban was not moved by this speech. At the place of execution, the Confessor handed him the cross, but Grandier turned away from him. He also refused to confess.

After the feet torture, Grandier was fragmented, to the place of execution he was brought on a cart and then dragged dragged to the stake. The square was Packed with people, gathered from all around to see the death of the sorcerer. Grandier wanted to appeal to people with speech, but surrounded by fire, the monks began to beat him with sticks.

One of them grabbed a torch and lit the fire. The executioner, a convict throwing the rope, tried to strangle him, but the rope is blown, and urban fell into the fire.

Strange fits of nuns, called luganskii devils did not stop after the burning of urban Grandier. A terrible disease has spread far beyond the monastery. In all the churches to serve mass and read the spell. Ludensky drama left no one indifferent. Among the population spread fits of madness. And especially strongly it affected the people involved in it. Many spellcasters ludensky devils have lost his mind, imagining that they are possessed by devils…

The process against witches continued in Catholic countries until the nineteenth century. The last fire was extinguished only in 1877, when in Mexico, five women were burned on charges of witchcraft.