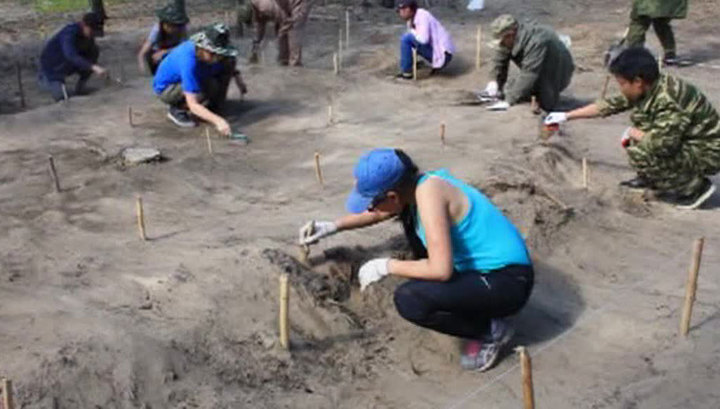 The site of ancient people of the Neolithic period found the students of the Yakut history Department. This is another proof that several thousand years ago in this harsh region, the people lived, what they could and knew. And, judging by the finds, and even actively communicate with neighbors.

This footage shows evidence that several thousand years ago there lived a man. Parking of ancient people is forty-four kilometers from the regional capital of Yakutsk. It was discovered by history students during the summer practice.

“Here the terrain is good, so we assumed that there may be something valuable,” notes Barbara Sivtseva, student at the faculty of NEFU them. M. K. Amosov.

“We found some very interesting finds – a fragment of pottery is thin-walled and very much different stone tools,” says Sian Barabanki, student of historical faculty of NEFU them. M. K. Amosov.

The Parking lot called “Aiyy Tibet”, which is translated “God”. Nearby lake. Experts here believe that before our era there was the whole settlement. This is the sixth such find in these parts.

“When we began to study the Parking lot, began to gradually come to the conclusion that these monuments is not just the individual Parking individuals. This is a complex, but this lake, in fact, was home to a number of ancient people. While we can’t say who they are, but we know that they lived here from the early Neolithic until the late middle ages”, — says Nikolay Kiryanov, a leading Methodist of the Museum of archaeology and Ethnography of the NEFU them. M. K. Amosov.

Archaeologists say that everything points to a high level of development of the local tribes of the prehistoric era. Further study will allow a more complete understanding of the stone industry and the characteristics of ceramic production at the time.

The exact boundaries of the object is not yet established, the investigation will continue. Presumably the Park contains remnants, whose age ranges from five to eight thousand years.

Such discoveries will still be a lot, experts say. Yakutia – the real archaeological Klondike. This Park was 1174 m opening and it is with the proviso that investigated only one percent of territory of the region.

To preserve all the priceless gifts of history needed to tighten control. Any construction or business activity must be consistent with archaeologists, experts say.

“Now any individual or legal entity, when we want to build something, you have to pass a compulsory procedure of examination and to enter the archaeologists. And this procedure we control”, — said Gavril Terentyev, head of preservation, recording and protection of objects of cultural heritage, Ministry of culture and spiritual development of Sakha(Yakutia).

All found materials will be in the Museum of archaeology. Further, these data will be used to build historical reconstructions of the life of the Neolithic population of the region.