Alien invasion will happen in 2017 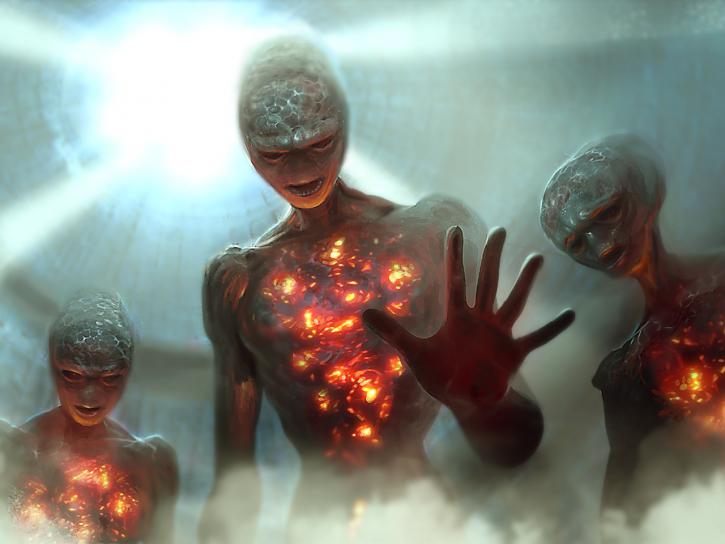 Nostradamus, famous for his accurate prophetic predictions, and left behind a huge legacy of the predictions in the quatrains. Much of the predicted in them has come true, and something only meant to be.

Many people are studying the quatrains of Nostradamus and trying to decipher hidden prophecies in them. One of the researchers works great predictor, reported that in one of the poetic quatrains, hidden prediction about the invasion of aliens on Earth, which will occur in 2017.

According to Mr. chase, who deciphered the prophecy, the alien civilization is already preparing for a full-scale invasion of our planet. The signal for the attack will serve to start the 3rd world war. As soon as it starts to Land immediately invaded by alien aggressors, who use a global war between the earthlings for their own purposes.

Talked about aliens and the famous clairvoyant Vanga.

Wang said that before the end of the world we can nauchitsya from disease, thirst and hunger. The prophetess assured that there will be no flood this is compensated for by an abundance of small disasters.

“From the face of the earth will disappear one of the Arab States. However, it will happen soon”.

“The people will establish contacts with brothers in mind from other worlds. But some aliens from other worlds have been living on Earth… they Come from a planet which in the language of its inhabitants called Vamfim. From the Earth – the third”.

We can assume that we are talking about the Saturn.

Pills will do it out of algae, and they will be sold worldwide

A prediction made more than 50 years ago, but today these drugs are widely used and are considered to be medical Pharmacopoeia of the future.

The day will come when from the earth will disappear different plants, vegetables, animals… First of all, onion, garlic and pepper. Then come all the bees

Most likely, we are talking about genetic engineering, which modifies many of the plants to ensure their survivability, but animals and insects that leads to death. Today from all over the world, information comes of the death of bees and reduction of the list of honey plants. The bees just nothing to take from modified plants.

Here are the main Vanga predictions about our future.

2016 – Great body will come to Earth and hit the water. The waves will wash away a lot of countries, and the sun will go dark for two years. In Europe almost no people.

2018 – China is a world power. Third world countries are developing, and once developed regress.

2023 – the Orbit of the Earth has a different position. The earth turns away from the Sun where it was hot, there will be ice, many animals will become extinct. People will fight for energy, but they have enough soul to stop. And then time back.

2025 – Europe’s Population increased, but its still not enough.

2028 – creating a new alternative source of energy (controlled thermonuclear reaction). Hunger is gradually being overcome. The beginning of the exploration of Venus.

2033 – the level of the oceans due to the rapid melting of glaciers in the North.

2043 – the World economy begins to flourish. In Europe dominated by Arabs.

2046 is Starting to grow human organs. The best treatment of any ailment is transplantation.

2066 – Against Europe invaded by Muslims, the United States used a new kind of weapon – the climate. Cold starts throughout the South of Europe.

2100 – Artificial Sun begins to illuminate the dark side of the Earth.

2123 – Wars between small countries. Big powers watching from the side.

2125 – Hungary will receive signals from space (again all recall the predictions of Vanga).

2130 – the Aliens will share technology the conquest of the Ocean depths. The first underwater colony.

2164 – With the help of new technology, many animals turn into more intelligent humans.

2183 – Colony on Mars becomes a nuclear power and demands independence (like when – the United States demanded from England).

2196 – Asian and European Nations become one.

2201 – At the Sun slowing thermonuclear processes. The beginning of the cold snap.

2221 – In the search for extraterrestrial life, humanity comes into contact with someone terrible, which Wang was afraid to tell.

2262 – orbits of planets Gradually change. Mars is threatened by a collision with a comet.

2271 – re-designed to change the physical constants.

2273 – All of today’s world races merged into one. The birth of a new world race.

2279 – energy out of nowhere (probably from the so-called zero point or dark matter, perhaps).

2291 – the Sun continues to cool. Sent expedition to “resuscitate” light.

2296 – due to solar flares, changes the gravitational force of the Earth. Fall to the Earth and the moon old space stations and satellites.

2299 – In France – there is a strong guerrilla movement against Islam.

2302 – new important laws and secrets of the Universe.

2354 – Accident on one of the artificial Sun leads to drought on the Ground.

2378 – the Emergence of new, more tenacious and adaptable race.

3005 – War on Mars. A powerful explosion disrupts the trajectories of the planets.

3010 – the Moon is destroyed by a comet. The land in the belt of debris and dust.

3797 – On Earth there is no life. Humanity starts developing from the beginning in another solar system.

But what Vanga predicted Russia.

2017 Vladimir will rule as before. A lot of businesses. Cities thrive. People are spiritually corrupted. Prosperity. War imminent threaten, past the betrayal will be felt.

2022 – the Number of Russians is small. Conflicts within the country. The state fragmented. Moscow is no longer Russia, further the Ural mountains of Russia, left, not Russia. Moscow itself will be moving away and will no longer be the center.

2030 – Siberia is truly the breadbasket has become. The city is large, thriving. The people in them need not feel. No more strife. Europe wants to grab a piece. China is on the way, but not yet engaged. Soldiers of the border guard.

2045 – the World is in a panic. Crisis. No oil, energy is in short supply. Europe without water dies. Russia by itself, living, thriving. A lot of people, a lot of money, water and lots of light.

2060 – Russia became great. More need not run after anyone. Center in the Ural mountains now. North and Moscow want to go back, but do not need traitors of Russia. A formidable weapon it protects. No one in the border should not dare. All live together, no fighting. Coastal cities had merged with the Siberian frosts.

2100 – small City merged into large. Not a lot of them, but all of Russia is built. Fuel new machines are no more, instead, they are different. The Church at every step. Boys and girls are strong, have a hefty health. There is no need. Happy time.

2176 – couldn’t stand the envious fierce. Attacked Russia. From all of the parties climb. The Russian people bounces. Warriors spirit indestructible. With numerical superiority fight. A lot of the population died, many disappeared. But helped the country, saved it from sorrow and strife.

2200 – All restored to the Russian people. Development to new limits reached. Knowledge from top get. In the sky fly. Help those in need.

2300 – Russian everywhere succeed. The moon and planet red house was the second. Live in iron houses. The Sun’s energy is used. The city is small but beautiful. No more of such in the world is able.

2450 – a Catastrophe of global Russia hooked. The wind blew the buildings, the water flooded the forests and fields. But the city in the sky is not hurt.

2600 – you Know the sky on the far. Cards lot, stars a lot, but little air. The big idea is, like Earth to do. Headbutting, but can not think of.

2890 – the red planet, like Earth and water and air and forest there. The city of the ancestors found. Help from the depths of space came. The power of good.

3000 – No more Russia, there are Russian people. One language in the vast great, one faith in many people, and friends with the good kind of unusual. Build together, but not hands. Mechanisms all make and protect.

Tags: Alien invasion will happen in 2017

ALOT of discrepancy there. How does how does Islam take over europe if europe and asia merge with China being a world power, then france (being apart of europe) is going to fight against islam during a time after you say there will be one race and religion? yeah ok pull someone else leg