As quickly epidemic of the zombie will destroy mankind 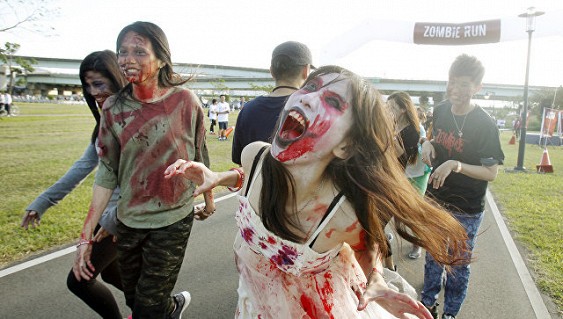 Approximately for the 100-th day after the beginning of “zombie apocalypse” and rapid distribution of the zombie on the ground the number of people will decrease to values at which a repeated population of the planet will be more narrow almost impossible, mathematicians declare.

One of the most popular scenarios of doomsday is so-called “zombie apocalypse” today – extermination of mankind as a result of rapid distribution nobody a virus or a bacterium which turn the victims into extremely aggressive and unreasonable entities having only one emotion – feeling of hunger. When such zombie bites other people, he transmits them the infection and by that helps a microbe to extend.

Of course, in the actual world it will hardly occur, but scientists all the same actively study such “zombies apocalypses”. Why they do it? The matter is that such scenarios of “doomsday” allow physicians to count consequences of emergence of outbreaks of still incurable and deadly diseases, such as Ebola epidemic in the Western Africa and to find paths of their control.

James Moore from university of Leicester (Great Britain) and his colleagues decided to count what time will be required to similar epidemic completely to destroy mankind or to reduce population of people to such level at which it will die out in itself.

Speed of development of “zombopokalipsis” as the physicist notes, depends on two main parameters – with what probability and as quickly there is a process of “zombifikation” after contact with the zombie, and you “indulge” life expectancies of similar.

Books and cinemas describing this process give absolutely different picture – in some movies, such as “28 days later”, infection occurs actually instantly and with guarantee, however zombies live in them rather not for long – several tens of days. In other movies, such as “Resident evil”, process of infection several clocks last and можон to stop it, but at the same time zombies live decades, without needing water or food.

Counting consequences of similar “flashes of the zombie education”, Moore and his team decided not to express sympathies to this or that movie, and thought up the own scenario, modeling it on the basis of these two indexes for the most terrible epidemic in the history of mankind – the outbreak of plague, “black death” in Medieval Europe in the 14th century of our age.

In their scenario infection at a sting of the zombie happened to probability in 90%, and the infected “individuals” lived about 20 days, being parched with thirst and hunger. Total number of Earth was taken from actual modern indexes – about 7,5 billion people.

The model of distribution of the zombie created by the British physics considered existence of borders between the countries and the fact that people are distributed on the ground extremely unevenly. For example, one of rules in this model was the fact that zombies could not cross border if them at least 10 thousand in the territory of the country where they initially “lived” did not collect. If zombies could not reach similar population, they “died out”, like local epidemics.

As showed these calculations, even only one infected persons in rather densely inhabited area in principle are enough to cause scale epidemic approximately for the 20th day after its infection. In 100 days as show calculations of researchers, on Earth there will live only 181 persons and about 190 million zombies.

Even when people will run from the areas captured “zombipokalipsisy” the infection all the same will win against people – besides the 100th day on Earth will have about 273 people and about one million “living dead persons”.

And in that and in case of the latter the number of survivors will appear almost below that level which is necessary for “restarting” of a civilization and repeated colonization of the planet. Respectively, if “the zombie’s epidemic” lasts longer than 100 days, the mankind will be doomed to extinction, authors of a research conclude.

The faculty of physics and astronomy of university of Leicester (Great Britain) annually publishes the scientific magazine Physics Special Topics which authors and editors are fourth-year students of faculty. All articles sent to the magazine undergo obligatory reviewing, and participation in its work is estimated by teachers and it is necessary for obtaining the diploma.