Asteroid Phaethon will crash into Earth on December 16 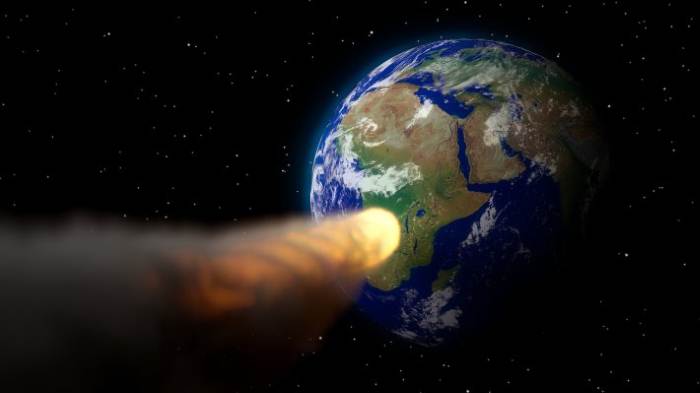 NASA again worries about the future of the Earth. According to astrophysicists, a new cosmic body is rushing to our planet. A new threat to the Earth is the asteroid Phaethon, discovered in 1983 of the last century. Analyzing the orbit of rotation of a huge cosmic stone, its diameter is almost 5 kilometers, astronomers from the American Space Agency made quite disturbing conclusions. Next Saturday, December 16, Phaethon can fall to Earth. The experts made conclusions about the new apocalypse from the fact that on that day the asteroid should as closely as possible find its way to our planet and pass if it does not change the trajectory dramatically, at a distance of 9.66 million kilometers.

Astronomers consider Phaethon the main asteroid of the meteorite stream of Geminida, which the inhabitants of the Earth can observe in mid-December. This year, the brightest moments of the cosmic phenomenon can be seen from 12 to 21 December. Scientists note that in its orbit, Phaethon resembles a comet more than an Apollo class asteroid.

Scientists from the Baltic Federal University named after I. Kant even created a virtual model of the Phaethon rapprochement with the Earth. Experts claim that nothing global threatens our planet, but it’s worth to be on the alert, as the distance is a little less than I would like for complete safety. They note that if a space visitor of this diameter collided with our planet, that humanity would be erased from the face of the Earth.

Among scientists there is an opinion that when approaching the Earth, the Phaeton, constantly accompanied by Geminid stones, simply “throws” our planet with cosmic cobblestones. The smallest, as usual, will burn with the passage of the atmosphere, but larger ones will reach the surface of the globe.
Astrophysicists are interested in the orbit of the motion of the asteroid. They note that in addition to the Earth, it passes through Mercury, Venus and Mars in the process of its “ritual dance” in our Solar System.

Also Phaeton is one of the few asteroids that “does not fear” the Sun and passes near it relatively close, the distance is 21 million kilometers. Scientists suggest that the cosmic body in the past had a larger diameter, but such close “walks” near the red-hot star significantly reduced its volume.

However, not only Phaethon keeps scientists from NASA in suspense. Earlier it was reported that on New Year’s Day another potentially dangerous space body of Apollo class, asteroid 2017 QL33, would approach our planet. The diameter of this space “guest” is almost 320 meters and it is compared with a football stadium. The speed at which the 2017 QL33 approaches our planet is 8.2 km / s. The moment of the minimal approach to the Earth can be observed in the early morning.

The fact that humanity will die at the end of 2017, confident Katherine Burnett, a specialist from the National Meteorological Service of the UK The Met Office. According to the latest data, humanity will only have 15 minutes to say goodbye and then everything will plunge into darkness. The reason for this will be the most powerful coronary impact that the Sun will produce on our planet. Bernet said that the coronary “storm”, which will approach the Earth in 19 hours after the release on Svetil, earth experts will be able to fix 15 minutes before the end of the world.

Other researchers of the cosmos are not so apocalyptic, they assign humanity to exist for another 20-25 years. According to the calculations of experts who monitor the amount of space debris in the orbit of our planet, all the “trash” neglected by the conquerors of space in the near-earth space, will fall to Earth in the period from 2037 to 2043 years. Scientists are sure that on our planet because of this, there will be a global planetary catastrophe and Asia and Africa will necessarily perish.

Fans of the theory of the existence of Nibiru still, despite many unrealistic predictions that she will destroy the Earth this year, are confident that Planet X is pushing our planet towards the imminent Armageddon. Influencing its magnetic field on the speed of rotation of the globe, the planet gradually slows down and, eventually, finally stops.

Conspirologists cite the example of the existence of a mysterious aggressive planet, the discovery by scientists from NASA of the exoplanet WASP-18b, which according to their assumptions is Nibiru. A new cosmic body, whose existence is contrary to all laws of terrestrial physics, was opened by Koel Hellier, professor of astrophysics at the University of Kiel.

A pernicious planet should appear on the terrestrial horizon on December 20, after which the Earth will inevitably die. Adhering to this opinion, conspiracy experts even applied to NASA with a request to recognize the existence of Nibiru, but the organization, as usual, did not react to their loud statements.

It is known that periodically in defense of the American Aerospace Agency astronauts and other experts join. They explain the silence of the organization by the fact that the statements of various virtual specialists are groundless and are not taken seriously. For example, astronaut Drew Foster advised everyone to listen yet to the opinion of official science.

Our planet this year was predicted by many different apocalypse, which it safely survived. Skeptics are sure that even this time amateurs of “space horror stories” are mistaken, and humanity will enter peacefully in 2018.